Stability:
Stable. Incompatible with strong acids, strong reducing agents, organic materials.
Water Solubility
insoluble
Merck
14,5730
Reactivity Profile
The stability of manganese dioxide is due primarily to its insolubility. It is, however, readily attacked by reducing agents in acid solution, for example oxidizing concentrated hydrochloric acid to chlorine. In hot concentrated alkali it dissolves to give a purple solution which contains an equimolar mixture of trivalent manganese, probably as (Mn(OH)6)3- and manganate(V), (MnO4)3-. Manganese dioxide is also one of the most active catalysts for the oxidation of carbon monoxide near room temperature.
Uses
The chemistry of manganese(III) is not extensive, and in the higher oxidation states manganese dioxide and potassium permanganate are the most important compounds.
Manganese dioxide is also used in the manufacture of glass to bleach the colour of any iron present. If excess manganese dioxide is added, a pink coloration can be produced in the glass and if a large excess is present it will appear black.
Other uses of manganese dioxide include its use as an oxidizing agent in organic chemistry and as an oxidizing agent in safety matches, fireworks and flares. It is also an effective adsorbent for hydrogen sulphide and is also used to colour ceramics.
CAS DataBase Reference
1313-13-9(CAS DataBase Reference)
NIST Chemistry Reference
manganese(IV) dioxide(1313-13-9)
EPA Substance Registry System
1313-13-9(EPA Substance)

Hazard
Oxidizing agent, may ignite organic materials.
Potential Exposure
Manganese dioxide is used as depolarizer for dry cell batteries, for production of manganese metal; as an oxidizing agent; laboratory reagent; and in making pyrotechnics and matches; in dry cell batteries.
First aid
If this chemical gets into the eyes, remove any contact lenses at once and irrigate immediately for at least 15 minutes, occasionally lifting upper and lower lids. Seek medical attention immediately. If this chemical contacts the skin, remove contaminated clothing and wash immediately with soap and water. Seek medical attention immediately. If this chemical has been inhaled, remove from exposure, begin rescue breathing (using universal precautions, including resuscitation mask) if breathing has stopped and CPR if heart action has stopped. Transfer promptly to a medical facility. When this chemical has been swallowed, get medical attention. Give large quantities of water and induce vomiting. Do not make an unconscious person vomit.
Shipping
UN1479 Oxidizing solid, n.o.s., Hazard Class: 5.1; Labels: 5.1-Oxidizer, Technical Name Required. UN3137 (powder) Oxidizing solid, flammable, Hazard Class: 5.1; Labels: 5.1-Oxidizer, 4.1 Flammable solid, Technical Name Required.
Incompatibilities
A powerful oxidizer. Incompatible with strong acids; reducing agents; combustible materials (such as fuel and clothing; organic materials. Mixtures with calcium hydride is a heat- and friction-sensitive explosive. Vigorous reaction with hydrogen sulfide, diboron tetrafluoride; calcium hydride; chlorine trifluoride; hydrogen peroxide; hydroxyaluminum chloride; anilinium perchlorate. Decomposes when heated above 553C producing manganese(III)oxide and oxygen, which increases fire hazard. Reacts violently with aluminum (thermite reaction), potassium azide; rubidium acetylide; in the presence of hea
Waste Disposal
Generators of waste (equal to or greater than 100 kg/mo) containing this contaminant, EPA hazardous waste number N450, must conform to USEPA regulations for storage, transportation, treatment, and disposal of waste. Dispose of waste material as hazardous waste using a licensed disposal contractor to an approved landfill. Dispose of contents and container to an approved waste disposal plant. Containers must be disposed of properly by following package label directions or by contacting your local or federal environmental control agency, or by contacting your regional EPA office. All federal, state, and local environmental regulations must be observed. Do not discharge into drains or sewers

Physical properties
Black tetragonal crystals; density 5.08 g/cm3; Moh’s hardness 6.3; decomposes at 535°C; insoluble in water.
Uses
Manganese(IV) oxide is the most important ore of manganese from which the metal is mostly manufactured. The oxide occurs in nature as the mineral pyrolusite as heavy gray lumps, or black when powdered.
The mineral is used to produce manganese metal, most manganese salts, and also manganese steel and other alloys. The metallurgical applications of manganese(IV) oxide mainly involve making ferromanganese and special manganese alloys. Another important application of manganese(IV) oxide is in manufacturing dry-cell batteries and alkaline cells. The oxide also is a colorant in brick, tile, porcelain and glass; a drier for paints and varnishes; a 552 MANGANESE(IV) OXIDEpreparation for printing and dyeing textiles; a curing agent for polysulfide rubbers; an adsorbent for hydrogen sulfide and sulfur dioxide; an oxidizing agent in many organic syntheses such as quinone and hydroquinone; and a catalyst in laboratory preparation of oxygen from potassium chlorate. Manganese(IV) oxide also is used to make welding rods and fluxes, and ceramic magnets (ferrites); and is an additive to fertilizers.
Preparation
Pure manganese(IV) oxide (precipitate form) may be prepared by reducing permanganate ion with a manganous salt:
2KMnO4 + 3MnSO4 + 2H2O → 5MnO2 + K2SO4 + 2H2SO4
Manganese(IV) oxide can also be precipitated by oxidation of a manganese(II) salt using an oxidizing agent such as hypochlorite or peroxydisulphate:
Mn2+ + S2O82– + 2H2O → MnO2 + 2SO42– + 4H+
Manganese(IV) oxide may also be made by thermal decomposition of manganese(II) nitrate; or from roasting manganese(II) carbonate in air: Mn(NO3)2 → MnO2 + 2NO2
MnCO3 + ½ O2 → MnO2 + CO2
A highly active gamma-MnO2 can be produced by treating manganese(III) oxide with hot sulfuric acid:
Mn2O3 + H2SO4 → MnO2 + MnSO4 + H2O
Mn2O3 is derived from pyrolusite by heating the mineral at 600–800°C or reducing with powdered coal at 300°C.

Description
Manganese dioxide, mainly used as a depolarizer in dry cell batteries, is the most important non-metallic form of manganese. In either traditional alkaline and rechargeable battery cells, Manganese dioxide takes in electrons through a redox reaction, becoming Manganese III oxide. It also has applications in lithium-ion technologies.
It is also the primary precursor to ferromanganese, an alloy of iron used for its lower melting point and low cost.
It is black in appearance and used to color glass and ceramics, as well as for cave art and possibly body paint in prehistorical eras. Further uses include the purification of drinking water, and production of pure oxygen and chlorine.
Chemical Properties
Manganese dioxide ( MnO2 ) , known as pyrolusite when found in nature , is the most plentiful of all the manganese compounds. MnO2 is Iron-black to dark steel-gray or bluish mineral; black or bluish-black streak; metallic or dull luster. Soluble in hydrochloric acid. 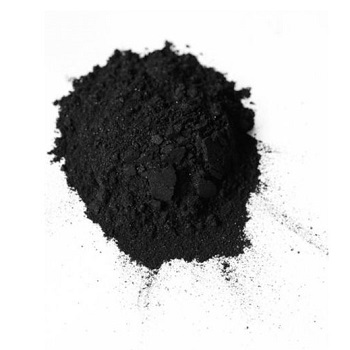 Manganese dioxide is an important component in batteries. It is also used in glassmaking to remove the green fint caused by iron impurities.
Uses
The chemistry of manganese(III) is not extensive, and in the higher oxidation states manganese dioxide and potassium permanganate are the most important compounds.
Manganese dioxide is also used in the manufacture of glass to bleach the colour of any iron present. If excess manganese dioxide is added, a pink coloration can be produced in the glass and if a large excess is present it will appear black.
Other uses of manganese dioxide include its use as an oxidizing agent in organic chemistry and as an oxidizing agent in safety matches, fireworks and flares. It is also an effective adsorbent for hydrogen sulphide and is also used to colour ceramics.
Toxicity evaluation
Inhalation exposure to high concentrations of manganese dusts (specifically manganese dioxide [MnO2] and manganese tetroxide [Mn3O4]) can cause an inflammatory response in the lung, which, over time, can result in impaired lung function. Lung toxicity is manifested as an increased susceptibility to infections such as bronchitis and can result in manganic pneumonia. Pneumonia has also been observed following acute inhalation exposures to particulates containing other metals. Thus, this effect might be characteristic of inhalable particulate matter and might not depend solely on the manganese content of the particle.
Resources
https://www.hindawi.com/journals/jnm/2013/736375/
https://b2bbusinessnews.wordpress.com/2012/03/22/uses-and-benefits-of-manganese-dioxide/
http://metalpedia.asianmetal.com/metal/manganese/application.shtml
https://www.chemistryworld.com/podcasts/manganese-dioxide/9217.article
https://en.wikipedia.org/wiki/Manganese_dioxide
https://en.wikipedia.org/wiki/Ferroalloy