General Description
A colorless liquid with an irritating odor. Toxic by inhalation and skin absorption. Flash point 153°F. Slightly soluble in water. Corrosive to metals and tissue. A lachrymator. Density 9.2 lb /gal.
Reactivity Profile
Halogenated aliphatic compounds, such as BENZYL CHLORIDE(100-44-7), are moderately or very reactive. Reactivity generally decreases with increased degree of substitution of halogen for hydrogen atoms. Materials in this group are incompatible with strong oxidizing and reducing agents. Also, they are incompatible with many amines, nitrides, azo/diazo compounds, alkali metals, and epoxides.
Air & Water Reactions
A lachrymator. Slightly soluble in water.
Hazard
Highly toxic, intense eye and skin irritant. A lachrymator. Upper respiratory tract irritant. Prob- able carcinogen.
Health Hazard
Intensely irritating to skin, eyes, and mucous membranes. Highly toxic; may cause death or permanent injury after very short exposure to small quantities. Has been listed as a direct-acting or primary carcinogen. Large doses cause central nervous system depression.
Potential Exposure
Used as an intermediate and as an irritant gas in chemical warfare. In contrast to phenyl halides, benzyl halides are very reactive. Benzyl chloride is used in production of benzal chloride, benzyl alcohol, and benzaldehyde. Industrial usage includes the manufacture of plastics, dyes, synthetic tannins, perfumes and resins. It is used in the manufacture of many pharmaceuticals. Suggested uses of benzyl chloride include: the vulcanization of fluororubbers and the benzylation of phenol and its derivatives for the production of possible disinfectants.
First aid
If this chemical gets into the eyes, remove any contact lenses at once and irrigate immediately for at least 15 minutes, occasionally lifting upper and lower lids. Seek medical attention immediately. If this chemical contacts the skin, remove contaminated clothing and wash immediately with soap and water. Seek medical attention immediately. If this chemical has been inhaled, remove from exposure, begin rescue breathing (using universal precautions, including resuscitation mask) if breathing has stopped and CPR if heart action has stopped. Transfer promptly to a medical facility. When this chemical has been swallowed, get medical attention. If victim is conscious, administer water or milk. Do not induce vomiting. Medical observation is recommended for 24 to 48 hours after breathing overexposure, as pulmonary edema may be delayed. As first aid for pulmonary edema, a doctor or authorized paramedic may consider administering a drug or other inhalation therapy.
Fire Hazard
BENZYL CHLORIDE burns but does not ignite readily. BENZYL CHLORIDE may ignite combustibles. When heated to decomposition, BENZYL CHLORIDE emits toxic and corrosive fumes. Some organic chlorides decompose to yield phosgene. Incompatible with active metals such as copper, aluminum, magnesium, iron, zinc, and tin and keep from strong oxidizing agents. Avoid contact with acids or acid fumes. Keep separate from oxidizing materials. May become unstable at elevated temperatures and pressures; may react with water resulting in some nonviolent release of energy. Polymerizes with evolution of heat and hydrogen chloride when in contact with all common metals except nickel and lead.
Shipping
UN1738 Benzyl chloride, Hazard class: 6.1; Labels: 6.1—Poisonous materials, 8—Corrosive material.
Incompatibilities
May form explosive mixture with air. Contact with water forms hydrogen chloride fumes. Strong oxidizers may cause fire and explosions. Unstabilized benzyl chloride undergoes polymerization with copper, aluminum, iron, zinc, magnesium, tin, and other common metals except lead and nickel, with the liberation of heat and hydrogen chloride gas. May accumulate static electrical charges, and may cause ignition of its vapors. Attacks some plastics and rubber. Thermal decomposition and polymerization reactions are inhibited, to a limited extent, by addition of triethylamine, propylene oxide, or sodium carbonate.
Waste Disposal
Incineration @ 816 C for 0.5 second minimum for primary combustion and 1204 C for 12.0 second for secondary combustion. Elemental chlorine formation may be alleviated by injection of steam or methane into the combustion process.
Chemical Properties
Benzyl chloride is a colorless to s lightly yellow liquid with a strong, unpleasant, irritating odor. The Odor Threshold is 0.05 ppm.The stabilized form of benzyl chloride contains a fixed amount of a sodium carbonate solution or propylene oxide. 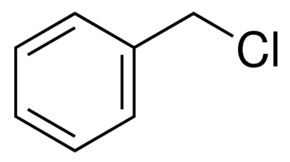 Physical properties
Colorless to pale yellowish-brown liquid with a pungent, aromatic, irritating odor. Odor threshold concentration is 47 ppbv (Leonardos et al., 1969). Katz and Talbert (1930) reported an experimental detection odor threshold concentration of 210 μg/m3 (41 ppbv).
Uses
Benzyl chloride is used in the manufacture ofdyes, artificial resins, tanning agents, phar maceuticals, plasticizers, perfumes, lubri cants, and miscellaneous benyl compounds.
Uses
An intermediate in the preparation of phenylacetic acid (precursor to phamaceuticals). Also a precursor molecule to benzyl esters which are used as plasticizer, flavorants, and perfumes.
Uses
Benzyl chloride is a chemical intermediate in the manufacture of benzyl Compounds, perfumes, pharmaceutical products, dyes, plasticizers, synthetic tannins, artificial resins, and quaternary ammonium compounds.
Production Methods
Benzyl chloride can be synthesized by chloromethylation of benzene in the presence of a catalyst (ZnCl2) or by treatment of benzyl alcohol with SO2Cl2. Commercially it is produced by chlorination of boiling toluene in the presence of light. Benzyl chloride can be oxidized to benzoic acid or benzaldehyde, or substituted to give the halogenated, sulfonated or nitrated product.With NH3 it yields mono-, di- or tribenzyl amine. With alcohols in base the benzylalkyl ether is formed. With phenols either the phenolic or nuclear hydrogens can react to give benzylaryl ether or benzylated phenols. Reaction with NaCN gives benzyl cyanide (phenylacetonitrile); with aliphatic primary amines the product is the N-alkylbenzylamine, and with aromatic primary amines N-benzylaniline is formed. Benzyl chloride is converted to butyl benzyl phthalate plasticizer and other chemicals.
Preparation
2g benzyl alcohol and 6g concentrated hydrochloric acid were mixed and slowly heated. at 60°C the mixture separated into two layers. the yield of benzyl chloride was 70% of the theoretical. When the alcohol and a large excess of the acid were mixed, the reaction took place at the room temperature after a few minutes, and a theoretical yield of the chloride separated. Benzyl alcohol dissolves sparingly in hydrochloric acid of the specific gravity 1.12. when the solution is warmed, benzyl chloride is formed. Benzyl bromide and benzyl iodide were prepared in the same way from the corresponding acids.
benzyl chloride is a lachrymator, and a powerful one at that. In the presence of water, it hydrolyzes to benzyl alcohol and hydrochloric acid, so it's clear why it burns your water saturated eye so bad.
Definition
ChEBI: A member of the class of benzyl chlorides that is toluene substituted on the alpha-carbon with chlorine.
Synthesis Reference(s)
The Journal of Organic Chemistry, 29, p. 3692, 1964 DOI: 10.1021/jo01035a504
Synthetic Communications, 16, p. 1173, 1986 DOI: 10.1080/00397918608056363
Tetrahedron Letters, 29, p. 5783, 1988 DOI: 10.1016/S0040-4039(00)82191-7
Chemical Reactivity
Reactivity with Water Undergoes slow hydrolysis, liberating hydrogen chloride (hydrochloric acid); Reactivity with Common Materials: Decomposes rapidly in the presence of all common metals (with the exception of nickel and lead), liberating heat and hydrogen chloride; Stability During Transport: Stable; Neutralizing Agents for Acids and Caustics: Rinse with sodium bicarbonate or lime solution; Polymerization: Polymerizes with evolution of heat and hydrogen chloride when in contact with all common metals except nickel and lead; Inhibitor of Polymerization: Triethylamine, propylene oxide or sodium carbonate.
Carcinogenicity
Benzyl chloride caused genetic mutations and chromosome-damaging effects in a wide variety of in vitro assays; it was not mutagenic in vivo in the mouse micronucleus assay
Source
As of October 1996, benzyl chloride was listed for regulation but no MCLGs or MCLs have been proposed (U.S. EPA, 1996).
Reported as an impurity (≤ 0.05 wt %) in 98.5 wt % benzyl mercpatan (Chevron Phillips, April 2005).
Environmental Fate
Biological. When incubated with raw sewage and raw sewage acclimated with hydrocarbons, benzyl chloride degraded forming nonchlorinated products (Jacobson and Alexander, 1981).
Chemical/Physical. Anticipated products from the reaction of benzyl chloride with ozone or OH radicals in the atmosphere are chloromethyl phenols, benzaldehyde and chlorine radicals (Cupitt, 1980).
Slowly hydrolyzes in water forming HCl and benzyl alcohol. The estimated hydrolysis half-life in water at 25 °C and pH 7 is 15 h (Mabey and Mill, 1978). The hydrolysis rate constant for benzyl chloride at pH 7 and 59.2 °C was determined to be 0.0204/min, resulting in a half-life of 34 min (Ellington et al., 1986).
May polymerize in contact with metals except nickel and lead (NIOSH, 1997).
When heated to decomposition, hydrogen chloride gas may be released (CHRIS, 1984).
Purification Methods
Dry it with MgSO4 or CaSO4, or reflux it with fresh Ca turnings, then fractionally distil it under reduced pressure, collecting the middle fraction and storing it over CaH2 or P2O5. It has also been purified by passage through a column of alumina. Alternatively it is dried over MgSO4 and distilled in a vacuum. The middle fraction is degassed by several freeze-thaw cycles and then fractionated in an 'isolated fractionating column' (which has been evacuated and sealed off at ~10-6 mm) over a steam bath. The middle fraction is retained. The final samples are distilled in a vacuum from this sample and again retaining the middle fraction. The purity is >99.9% (no other peaks are visible by GLC, and the NMR spectrum is consistent with the structure. [Mohammed & Kosower J Am Chem Soc 93 1709 1971, Beilstein 5 IV 809.] IRRITANT and strongly LACHRYMATORY.