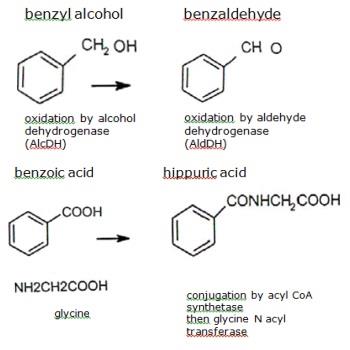 Benzyl alcohol is oxidised by alcohol dehydrogenase (AlcDH), a cytoplasmic enzyme present mainly in the liver, but also in the intestine and kidney. This reaction is saturable. The benzaldehyde formed is oxidised by aldehyde dehydrogenases (AldDH), cytoplasmic and mitochondrial enzymes mainly present in the liver, but also in the intestine and numerous organs.
storage
Benzyl alcohol oxidizes slowly in air to benzaldehyde and benzoic acid; it does not react with water. Aqueous solutions may be sterilized by filtration or autoclaving; some solutions may generate benzaldehyde during autoclaving.
Benzyl alcohol may be stored in metal or glass containers. Plastic containers should not be used; exceptions to this include polypropylene containers or vessels coated with inert fluorinated polymers such as Teflon.
Benzyl alcohol should be stored in an airtight container, protected from light, in a cool, dry place.
Purification Methods
It is usually purified by careful fractional distillation under reduced pressure in the absence of air. Benzaldehyde, if present, can be detected by UV absorption at 283nm. It has also been purified by shaking with aqueous KOH and extracting with peroxide-free diethyl ether. After washing with water, the extract is treated with saturated NaHS solution, filtered, washed, dried with CaO and distilled under reduced pressure [Mathews J Am Chem Soc 48 562 1926]. Peroxy compounds can be removed by shaking with a solution of Fe2+ followed by washing the alcohol layer with distilled water and fractionally distilling it. [Beilstein 6 IV 2222.]
Toxicity evaluation
Due to an abundance of useful applications across society, from industrial production to consumer products, benzyl alcohol is present in the environment and is steadily released through commercial and household waste streams. Benzyl alcohol was an early object of chemists striving for greener synthetic approaches involving mixed catalysts for oxidation. It is released into the atmosphere entirely as a vapor due to its high vapor pressure, where it is lost by degradation involving reaction with hydroxyl radicals at a half-life of about 2 days. Benzyl alcohol is expected to have quite high mobility based upon its soil to water partition coefficient, and a projected soil half-life of about 13 days.
Incompatibilities
Benzyl alcohol is incompatible with oxidizing agents and strong acids. It can also accelerate the autoxidation of fats. Although antimicrobial activity is reduced in the presence of nonionic surfactants, such as polysorbate 80, the reduction is less than is the case with hydroxybenzoate esters or quaternary ammonium compounds.
Benzyl alcohol is incompatible with methylcellulose and is only slowly sorbed by closures composed of natural rubber, neoprene, and butyl rubber closures, the resistance of which can be enhanced by coating with fluorinated polymers. However, a 2% v/v aqueous solution in a polyethylene container, stored at 208℃, may lose up to 15% of its benzyl alcohol content in 13 weeks. Losses to polyvinyl chloride and polypropylene containers under similar conditions are usually negligible. Benzyl alcohol can damage polystyrene syringes by extracting some soluble components
Regulatory Status
Included in the FDA Inactive Ingredients Database (dental injections, oral capsules, solutions and tablets, topical, and vaginal preparations). Included in parenteral and nonparenteral medicines licensed in the UK. Included in the Canadian List of Acceptable Non-medicinal Ingredients.

Hazard Codes
Xn,T
Risk Statements
R20/22:Harmful by inhalation and if swallowed .
R63:Possible risk of harm to the unborn child.
R43:May cause sensitization by skin contact.
R36/37/38:Irritating to eyes, respiratory system and skin .
R23/24/25:Toxic by inhalation, in contact with skin and if swallowed .
R45:May cause cancer.
R40:Limited evidence of a carcinogenic effect.
Safety Statements
S26:In case of contact with eyes, rinse immediately with plenty of water and seek medical advice .
S36/37:Wear suitable protective clothing and gloves .
S24/25:Avoid contact with skin and eyes .
S23:Do not breathe gas/fumes/vapor/spray (appropriate wording to be specified by the manufacturer) .
S53:Avoid exposure-obtain special instruction before use .
RIDADR
UN 1593 6.1/PG 3
WGK Germany
1

Overviews
Phenylcarbinol is also known as benzyl alcohol. Its chemical formula is C6H5CH2OH and its density is 1.045 g/mL at 25 ° C (lit). Benzylalcohol is one of the simplest fatty alcohol containing phenyl. It can be seen as benzene substituted by hydroxymethyl, or methyl alcohol substituted by phenyl. It is a colorless transparent sticky liquid with faint aroma. Sometimes benzyl alcohol is placed for a long time, it will smells like bitter almond flavor because of oxidation. Polarity, low toxicity and low steam, so it is used as alcohol solvent. It is combustible, and slightly soluble in water (about 25ml of water soluble 1 gram of benzyl alcohol). It is miscible with ethanol, ethyl ether, benzene, chloroform and other organic solvents.
Benzyl alcohol mainly exists in the form of free or ester in essential oil, such as jasmine oil, ylang-ylang oil, jasmine oil, hyacinth oil, sesame oil, hyacinths balsam, peru balsam and tolu balsam, which all contain this ingredient.
Benzyl alcohol should not be stored for a long time. It can be slowly oxidized to benzaldehyde and anisole in the air.Therefore benzyl alcohol products often smell like almond aroma with characteristic of benzaldehyde. In addition, benzyl alcohol is also easily oxidized to benzoic acid by many kinds of antioxidants such as nitric acid.
Benzyl alcohol has a narcotic effect. It has a strong stimulating effect on the eye, skin and respiratory system. Ingestion, inhalation or skin contact is harmful to the body. One will feel headache, nausea, vomiting, gastrointestinal irritation, convulsion, coma after ingestion of benzyl alcohol. It can lead to death under serious condition. Median lethal dose in rats is 1230mg/kg. When benzyl alcohol enters the body, it is firstly oxidized to benzoic acid and then condenses with glycine in the liver to form hippuric acid and excrets. Intramuscular injection using benzyl alcohol as solvent may result in gluteal muscle contracture.
Chemical Properties
Benzyl alcohol has a characteristic pleasant, fruity odor and a slightly pungent, sweet taste; the note tends to become similar to that of benzyl aldehyde on aging. Slightly soluble in water, and miscible with alcohol, ether, chloroform and so on.
Uses
Benzyl alcohol is a colorless clear oily liquid; its odor type is floral and its odor at 100% is described as 'floral rose phenolic balsamic'.Benzyl alcohol is used in cosmetics as afragrance component, preservative, solvent and diluting agent for perfumes and flavors, and viscosity-decreasing agent. It is used as a solvent for surface-coating materials, cellulose esters and ethers, alkyd resins,acrylic resins, fats, dyestuffs,casein (when hot), gelatin, shellac and waxes. It is added in small amounts to surface-coating materials to improve their flow and gloss. In the textile industry, benzyl alcohol is used as anauxiliary in the dyeing of wool, polyamides, and polyesters. In pharmacy it is used as a local anesthetic ingredient in over-the-counter anorectal, oral healthcare and topical analgesic drug products and, because of its antimicrobial effect, as an ingredient of ointments and other preparations (U.S. National Library of Medicine).
Benzyl alcohol is also a starting material for the preparation of numerous benzyl esters that are used as odorants, flavors, stabilizers for volatile perfumes, and plasticizers and is also employed in the extractive distillation of m- and p-xylenes and m- and p-cresols. Other uses include or have included heat-sealing of polyethylene films,in color photography as a development accelerator and in microscopy as embedding material (U.S.National Library of Medicine).
Benzyl alcohol may be found, in among other things, adhesives, binders, castings, cleaning agents,construction material, fillings,flooring materials, hardeners, metal coatings, paints/lacquers, photo developers,printings inks, skin care products and injectable solutions.
It should be realized that, by far, most adverse reactions to benzyl alcohol reported were from its use as a preservative rather than from its application as a fragrance ingredient. The literature on allergy to benzyl alcohol has been reviewed in 1999 and in 2005.
Production Method
1.Benzyl chloride with potassium or sodium is heated for a long timg, and hydrolyzes to yield benzyl alcohol.
2.Benzaldehyde in methanol and sodium hydroxide solution react to benzyl alcohol at 65~75 ℃. The product has high purity.
3.Using benzyl chloride as raw materials, it is heated and hydrolyzes to yield benzyl alcohol in the presence of the sodium catalyst. Specification of spices benzyl alcohol(QB792-81): the relative density of 1.041-1.046; refractive index of 1.538-1.541; boiling range 203-206℃ and distillate volume more than 95%; dissolving completely in 30 volumes of distilled water; containing more than 98 percent of alcohol; chlorine test (NF) as the side reaction. Raw material consumption quota: benzyl chloride 1600kg/t; soda ash 1000kg/t.
4.Benzyl alcohol exists naturally in orange flower, ylang-ylang, jasmine, gardenia, acacia, lilac and hyacinth. Benzyl chloride or benzaldehyde is used as raw materials to prepare benzyl alcohol in the industry.
5.Add chlorobenzyl to 12% sodium carbonate solution, heat to 93 ℃ and stir for 5h. Then warm the mixture to 101~103℃ and react for 10h. After the reaction, cool it to the room temperature, and add salt to saturation. After still standing for stratification, take the upper liquid and get crude products through pressure distillation. Then refine to gain the target products. The yield is 70%～72%.
C6H5CH2Cl+H2O[Na2CO3]→C6H5CH2OH+NaCl+CO2↑
In the presence of sodium hydroxide, formaldehyde and benzaldehyde react to produce benzyl alcohol by disproportionation reaction.
C6H5CHO+HCHO[NaOH]→C6h5CH2OH+HCOONa