General Description
A colorless, corrosive liquid. Combustible. Slowly dissolves in water and sinks in water. Severely irritates skin, eyes and mucous membranes.
Reactivity Profile
Organophosphates, such as TRIETHYL PHOSPHATE(78-40-0), are susceptible to formation of highly toxic and flammable phosphine gas in the presence of strong reducing agents such as hydrides. Partial oxidation by oxidizing agents may result in the release of toxic phosphorus oxides.
Air & Water Reactions
Slowly dissolves in water with slight decomposition .
Health Hazard
May be harmful by inhalation, ingestion or absorption. May cause irritation.
Fire Hazard
Special Hazards of Combustion Products: May produce hazardous decomposition products such as carbon dioxide, carbon monoxide and oxides of phosphorus.
Chemical Properties
Triethyl phosphate is a colorless, high-boiling liquid and containing 17 wt % phosphorus; mild odor. Very stable at ordinary temperatures, compatible with many gums and resins, soluble in most organic solvents, miscible with water. When mixed with water is quite stable at room temperature, but at elevated temperatures it hydrolyzes slowly. Combustible.It is manufactured from diethyl ether and phosphorus pentoxide via a metaphosphate intermediate. 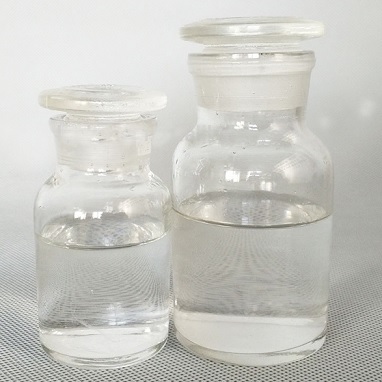 Triethyl phosphate has been used commercially as an additive for polyester laminates and in cellulosics. In polyester resins it functions as a viscosity depressant and as a flame retardant. The viscosity-depressant effect of triethyl phosphate in polyester resin permits high loadings of alumina trihydrate, a fire- retardant smoke-suppressant filler. Triethyl phosphate has also been employed as a flame-resistant plasticizer in cellulose acetate. Because of its water solubility, the use of triethyl phosphate is limited to situations where weathering resistance is unimportant. The halogenated alkyl phosphates are generally used for applications where lower volatility and greater resistance to leaching are required.
Uses
Triethyl phosphate is use as a flame retardant in the manufacture of polyisocyanurate (PIR) and polyurethane (PUR) foam insulation and thermoset plastic products. The chemical compound is also used as a viscosity reducer in plastic resins, and as a catalyst, solvent or intermediate in the production of pesticides, pharmaceuticals, lacquers and other products.As ethylating agent; formation of polyesters which are used as insecticides.
Production Methods
Prepared by the reaction of tetraethyl hypophosphate with ethanol in the presence of aluminum ethoxide or by treating triethyl phosphate with diethyl hydrogen phosphate.
Definition
ChEBI: A trialkyl phosphate that is the triethy ester derivative of phosphoric acid.
Synthesis Reference(s)
The Journal of Organic Chemistry, 25, p. 1000, 1960 DOI: 10.1021/jo01076a035
Industrial uses
1 Plasticizer for cellulose acetate, resins, plastics, gums.
2 Flame retardant additive in unsaturated polyester resins.
3 Solvent; lacquer remover.
4 Catalyst.
5 Chemical intermediate; ethylating agent.
Environmental Fate
Triethyl phosphate is not readily biodegradable. An accidental release of vapors to air, or liquid to soils or water, will degrade slowly in the environment. Releases to water may pose a danger to fish (low toxicity), invertebrates (low toxicity) and aquatic plants (low toxicity) prior to degradation. The chemical is not expected to adsorb to suspended soils and sediments.
Metabolism
A system utilizing isolated anterior forearm stratum corneum conjunctum of man to study skin penetrating capacity of a series of organic phosphates was developed. Trimethyl phosphate was the most penetrating, followed by triethyl phosphate, in a series of 8 trialkyl esters (Marzulli et al 1965).
Rats treated orally at 100 mg/kg and mice treated i.p. at 1000 mg/kg with [32P]-labeled triethyl phosphate excreted diethyl phosphate in the urine. No parent compound was detected in the urine of either species. S-Ethyl cysteine and S-ethyl cysteine N-acetate were also isolated. The compound was excreted very rapidly, with 90% of the administered dose in the urine in 16 h and nearly 100% within 96 h (Jones 1970).
Purification Methods
Dry the ester by refluxing it with solid BaO and then fractionally distil it under reduced pressure. It is kept over Na and distilled. Store it in the receiver protected from light and moisture. Alternatively it is dried over Na2SO4 and distilled under reduced pressure. The middle fraction is stirred for several weeks over anhydrous Na2SO4 and again fractionated under reduced pressure until the specific conductance reaches a constant low value of 25 1.19 x 108, 40 1.68 x 108, and 55 2.89 x 108 ohm-1 cm. It has also been fractionated carefully under reduced pressure through a glass helices-packed column. It is soluble in EtOH, Et2O and H2O (dec). [Estok & Wendlandt J Am Chem Soc 77 4767 1955, Hoffmann et al. J Am Chem Soc 78 6413 1956, (P NMR) Muller et al. J Am Chem Soc 78 3557 1956, French et al. J Chem Soc 3582 1959, IR: Bellamy & Beecher J Chem Soc 475 1952 and McIvor Can J Chem 36 820 1958, Kosolapoff Organophosphorus Compounds, Wiley p 258 1950, Beilstein 1 IV 1339.]