Acetophenone is an aromatic ketone found naturally in fruits, berries, nuts, and meat. Charles Friedel is credited with the first synthetic preparation of acetophenone by the distillation of a mixture of calcium benzoate and calcium acetate in 1857. Acetophenone was described in medical literature as a therapy for the treatment of insomnia under the name of hypnone as early as 1886. In pure form, acetophenone is a colorless, flammable liquid with a sweet odor that has been described as similar to orange blossom or jasmine. 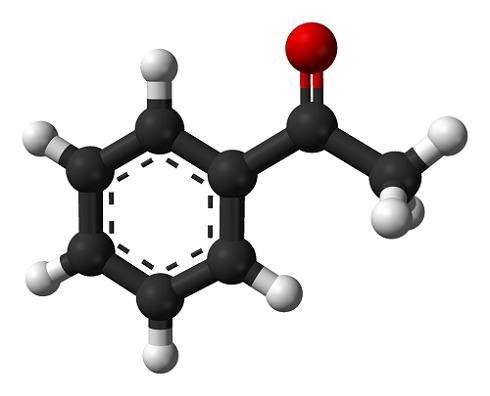 Industrial uses of acetophenone include use as a specialty solvent for plastics and resins, as a catalyst for polymerization of olefins, and as a photosensitizer in organic synthesis. Historically, acetophenone was used as an anesthetic agent, to induce analgesia and also as a hypnotic agent. On the basis of early descriptions of its use, it appears to have been most successful as a therapy for insomnia.

Large doses were required to induce sleep and its use as an anesthetic was most successful when used in conjunction with chloroform. The earliest reports of acetophenone in the medical literature date back to 1886 and the primary adverse reaction reported was severe local irritation when injected in patients subcutaneously.

The production and use of acetophenone as a specialty solvent and fragrance and flavor additive may result in environmental releases to the air, water, and soil. Acetophenone is slightly soluble in water and freely soluble in alcohol, chloroform, fatty oils, and glycerol. The vapor pressure at 25 °C is 0.4 mmHg, the Henry’s law constant is estimated to be 1.04×105atmm3 mol-1, and the octanol/water partition coefficient (log Kow) is 1.58.

It is unclear what mechanism is responsible for the central nervous system depression observed following high doses of acetophenone. In vitro evaluations have demonstrated that acetophenone suppresses voltage-gated ion channels in olfactory receptor cells and retinal neurons; however, it is unclear if this is related to any of the observed toxicity in animal studies.