Applications of 2,2,6,6-Tetramethylpiperidinooxy as a versatile compound 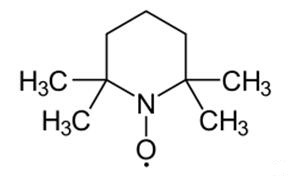 For the structure and bonding of TEMPO, the N-O distance is 1.284 Å and the O is 0.1765 Å out of the C2N plane according to X-ray crystallography. The stability of this radical can be attributed to the delocalization of the radical to form a 2-center 3-electron N-O bond. The stability is reminiscent of the stability of nitric oxide and nitrogen dioxide. Additional stability is attributed to the steric protection provided by the four methyl groups adjacent to the aminoxyl group. These methyl groups serve as inert substituents, whereas any CH center adjacent to the aminoxyl would be subject to abstraction by the aminoxyl [3]. Regardless of the reasons for the stability of the radical, the O–H bond in the hydrogenated derivative (the hydroxylamine) TEMPO–H is weak. With an O–H bond dissociation energy of about 70 kcal/mol, this bond is about 30% weaker than a typical O–H bond.

TEMPO is applied in organic synthesis as a catalyst for the oxidation of primary alcohols to aldehydes. The actual oxidant is the N-oxoammonium salt. In a catalytic cycle with sodium hypochlorite as the stoichiometric oxidant, hypochlorous acid generates the N-oxoammonium salt from TEMPO. One typical reaction example is the oxidation of (S)-(−)-2-methyl-1-butanol to (S)-(+)-2-methylbutanal: 4-Methoxyphenethyl alcohol is oxidized to the corresponding carboxylic acid in a system of catalytic TEMPO and sodium hypochlorite and a stoichiometric amount of sodium chlorite. TEMPO oxidations also exhibit chemo-selectivity, being inert towards secondary alcohols, but the reagent will convert aldehydes to carboxylic acids. In cases where secondary oxidizing agents cause side reactions, it is possible to stoichiometrically convert TEMPO to the oxoammonium salt in a separate step. For example, in the oxidation of geraniol to geranial, 4-acetamido-TEMPO is first oxidized to the oxoammonium tetrafluoroborate. 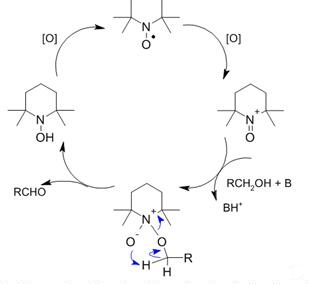 In industrial applications, TEMPO is sufficiently inexpensive for use on a laboratory scale, however at an industrial scale its price is often prohibitive. Structurally related analogues do exist, which are largely based on 4-hydroxy-TEMPO (TEMPOL). This is produced from acetone and ammonia, via triacetone amine, making it much less expensive. Other alternatives include polymer-supported TEMPO catalysts, which are economic due to their recyclability. Moreover, high volume example of TEMPO-like compounds would be hindered amine light stabilizers which are commonly used as stabilizing additives in plastic [4].