Chemical properties
Propylene oxide （PO） is a clear colorless volatile liquid with an ethereal odor. The industrial products are the racemic mixture for two optical isomers. It can be partially miscible with water [the solubility at 20 °C in water is 40.5% by weight; water solubility in propylene oxide is 12.8% by weight]. It can be miscible with ethanol and ethyl ether and form a binary azeotrope with dichloromethane, pentane, pentene, cyclopentane and cyclopentene.
Propylene oxide molecule contains an asymmetrical carbon atom, being able to carry out many chemical reactions. It has slightly lower chemical activity than ethylene oxide with reaction with active hydrogen (such as water, alcohols, acids, amines) containing material, with ring-opening to form diol, alcohol ether and alcohol amine. Hydrolysis reaction can generate propylene glycol with etherification reaction leading to the formation of alcohol ether. Under the action of catalyst, it can produce polyether polyol. Reaction with glycerol can generate polyether triol. It can react with carboxylic acid to generate ester. It can react with ammonia, leading to the formation of alcohol amine. It can react with hydrogen halide to generate halogenated alcohol. It can react with hydrogen sulfide to generate mercaptan formation. It can react with thiophenol to generate hydroxypropyl benzene sulfide. Under the catalysis of the trimethylamine, it can react with carbon disulfide, leading to the formation of allyl trithiocarbonate. Under the action of catalyst, it can be isomerized to generate propionaldehyde. Propylene oxide is toxic with irritating effect on skin and eyes, even at a concentration of 1%. Its vapor can cause stimulation of respiratory organs and eyes with inhaled causing the inhibition on the central nervous system. Rat oral LD50:930mg/kg. The maximum allowable concentration of the workplace is 20 × 10-6. 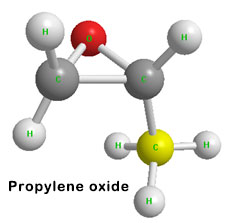