Appearance
Lithium is a silvery to grayish-white metal that turns yellow on exposure to air and/or moisture.
Appearance
soft silver metal
mp
180 °C(lit.)

Stability:
Stability Stable, but reacts violently with water. Store under oil.
Water Solubility
REACTS
Merck
13,5542
History
Discovered by Arfvedson in 1817. Lithium is the lightest of all metals, with a density only about half that of water. It does not occur free in nature; combined it is found in small amounts in nearly all igneous rocks and in the waters of many mineral springs. Lepidolite, spodumene, petalite, and amblygonite are the more important minerals containing it. Lithium is presently being recovered from brines of Searles Lake, in California, and from Nevada, Chile, and Argentina. Large deposits of spodumene are found in North Carolina. The metal is produced electrolytically from the fused chloride. Lithium is silvery in appearance, much like Na and K, other members of the alkali metal series. It reacts with water, but not as vigorously as sodium. Lithium imparts a beautiful crimson color to a flame, but when the metal burns strongly the flame is a dazzling white. Since World War II, the production of lithium metal and its compounds has increased greatly. Because the metal has the highest specific heat of any solid element, it has found use in heat transfer applications; however, it is corrosive and requires special handling. The metal has been used as an alloying agent, is of interest in synthesis of organic compounds, and has nuclear applications. It ranks as a leading contender as a battery anode material because it has a high electrochemical potential. Lithium is used in special glasses and ceramics. The glass for the 200-inch telescope at Mt. Palomar contains lithium as a minor ingredient. Lithium chloride is one of the most hygroscopic materials known, and it, as well as lithium bromide, is used in air conditioning and industrial drying systems. Lithium stearate is used as an all-purpose and hightemperature lubricant. Other lithium compounds are used in dry cells and storage batteries. Seven isotopes of lithium are recognized. Natural lithium contains two isotopes. The metal is priced at about $1.50/g (99.9%).
CAS DataBase Reference
7439-93-2(CAS DataBase Reference)
NIST Chemistry Reference
Lithium(7439-93-2)
EPA Substance Registry System
7439-93-2(EPA Substance)

General Description
A soft silvery metal that is normally grayish white due to oxide formation. Spontaneous ignition is likely if heated to melting point.
Reactivity Profile
Burns in air, oxygen, nitrogen, hydrogen, and carbon dioxide. The reactions can become extremely violent at higher temperatures. The disposition to ignite of surfaces of molten lithium exposed to any of these gases is increased by the presence of lithium oxides and nitrides. Lithium reacts avidly with water to generate gaseous hydrogen and a solution of lithium hydroxide (a caustic). Contact with halogenated hydrocarbons can produce extremely violent reactions, especially on impact [Haz. Chem. Data 1966]. Boron trifluoride reacts with incandescence when heated with lithium [Merck 11th ed. 1989]. Maleic anhydride decomposes explosively in the presence of lithium [Chemical Safety Data Sheet SD-88. 1962, Chem. Haz. Info. Series C-71. 1960]. Chlorine vapors and lithium react producing a luminous flame [Mellor 2, Supp. 1:380. 1956]. The product of the reaction between lithium and carbon monoxide, lithium carbonyl, detonates violently with water, igniting the gaseous products [Mellor 2, Supp. 2:84. 1961]. The reaction of lithium and ferrous sulfide starts around 260°C with subsequent rise in temperature to 950° C [Mellor 2, Supp. 2:80. 1961]. A truck, which was carrying lithium batteries, sodium dithionite and derivatives of cyanide, caught fire; multiple explosions occurred as the cargo was exposed to the air.
Air & Water Reactions
Highly flammable. Is readily ignited by and reacts with most extinguishing agents such as water, carbon dioxide, and carbon tetrachloride [Mellor 2, Supp 2:71. 1961]. Reacts with water to form caustic LITHIUM(7439-93-2) hydroxide and hydrogen gas (H2). LITHIUM(7439-93-2) is spontaneously flammable in air if heated to 180°C if the surface of the metal is clean.
Health Hazard
Contact with eyes causes caustic irritation or burn. Incontact with skin lithium reacts with body moisture to cause chemical burns: foil, ribbon, and wire react relatively slowly.
Potential Exposure
Lithium is used in inorganic syntheses; the manufacture of storage batteries; heat transfer liquids; and metal alloys.
First aid
If this chemical gets into the eyes, remove any contact lenses at once and irrigate immediately for at least 15 minutes, occasionally lifting upper and lower lids. Seek medical attention immediately. If this chemical contacts the skin, remove contaminated clothing and wash immediately with soap and water. Seek medical attention immediately. If this chemical has been inhaled, remove from exposure, begin rescue breathing (using universal precautions, including resuscitation mask) if breathing has stopped and CPR if heart action has stopped. Transfer promptly to a medical facility. When this chemical has been swallowed, get medical attention. Give large quantities of water and induce vomiting. Do not make an unconscious person vomit. Medical observation is recommended for 24 to 48 hours after breathing overexposure, as pulmonary edema may be delayed. As first aid for pulmonary edema, a doctor or authorized paramedic may consider administering a drug or other inhalation therapy.
Shipping
UN1415 Lithium, Hazard Class: 4.3; Labels: 4.3-Dangerous when wet material. UN3089 Metal powders, flammable, n.o.s., Hazard Class: 4.1; Labels: 4.1- Flammable solid
Incompatibilities
Violent reaction with water, forming flammable hydrogen gas and corrosive lithium hydroxide, a strong caustic solution. Heating may cause violent combustion or explosion. Finely divided particles or powdered form may ignite spontaneously in air. Contact with air forms corrosive fumes of lithium hydroxide. Violent reaction with oxidizers, acetonitrile, nitric acid; arsenic, bromobenzene, carbon tetrachloride; hydrocarbons, halogens, halons, sulfur, and many other substances. Forms impactand friction-sensitive mixtures with bromobenzene, carbon tetrabromide, chloroform (weak explosion), iodoform, halogens, halocarbons, methyl dichloride; methyl diiodide and other substances. Attacks plastics, rubber, ceramic materials; concrete, sand, and metal alloys: cobalt, iron, manganese, nickel

Introduction
Lithium, the lightest of the alkali metals, has an atomic number of 3 and an atomic weight of 6.94. Lithium exhibits oxidation states of zero and plus one and is clearly an alkali metal. However, lithium and its compounds are not always typical of the other alkali metals. The high ionic charge density and the strong tendency for lithium to form a monopositive ion strongly influence the stability of lithium compounds and the type of bond which lithium forms with other atoms, ions and radicals. The unusually high charge density of the lithium ion is a crucial factor in setting lithium and its compounds apart from the other alkali metals and their compounds. 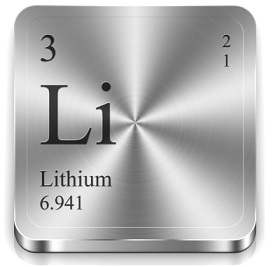 Lithium has numerous industrial applications. It is used to make highenergy lithium batteries. Lithium and its aluminum alloys are used as anodes in non-aqueous solid-state batteries. Also, many of its salts are used as electrolytes in these batteries. Another major application is in metallurgy. Lithium is alloyed with lead, magnesium, aluminum and other metals. Its alloy Bahnmetall is used for wheel bearings in railroad cars, and its magnesium alloy is used in aerospace vehicles. Probably the most important applications of lithium are in preparative chemistry. It is the starting material to prepare lithium hydride, amide, nitride, alkyls and aryls. Lithium hydrides are effective reducing agents. The alkyls are used in organic syntheses.
Physical Properties
Soft silvery-white metal; body-centered cubic structure; density 0.531 g/cm3; burns with a carmine-red flame, evolving dense white fumes; melts at 180.54°C; vaporizes at 1,342°C; vapor pressure 1 torr at 745°C and 10 torr at 890°C; electrical resistivity 8.55 microhm-cm at 0°C and 12.7 microhm-cm at 100°C; viscosity 0.562 centipoise at 200°C and 0.402 centipoise at 400°C; reacts with water; soluble in liquid ammonia forming a blue solution.
Uses

Lithium is used as a starting material or chemical intermediate in a number of reactions. Both lithium hydride and lithium nitride, which are prepared by the direct combination of their elements. Other inorganic compounds of lithium may be prepared by the direct combination of the elements or by the reaction of lithium with an acid gas if an unusually high purity product is required. For example, extremely dry lithium sulfide can be prepared by the reaction of lithium metal with hydrogen sulfide. Such processes are hazardous and expensive and are generally avoided if possible. Lithium may be used in the preparation of both alkyl- and aryl-lithium compounds and lithium alkoxides.
Lithium Metal as a Polymerization Catalyst, usually as a dispersion, has been used to polymerize such monomers as butadiene, isoprene, styrene and acrylates. It has also been used to produce copolymers. Lithium in High-strength Glass and Glass-ceramics The use of lithium compounds to manufacture high-strength glass and glass-ceramics has greatly increased within the past decade.


Production
Lithium is obtained primarily from its ore, spodumene. Another important source is natural brine found in many surface and ground waters, from which the metal also is produced commercially.
Reactions
Lithium metal is highly reactive but less so than other alkali metals. Its chemical properties, however, are more like those of the alkaline earth metals. At ordinary temperatures, lithium does not react with dry oxygen.
However, it reacts above 100°C, forming lithium oxide, Li2O:
The metal ignites in air near its melting point, burning with intense white flame, forming Li2O.
Lithium reacts with water forming lithium hydroxide with evolution of hydrogen:
2Li + 2H2O → 2LiOH + H2
The reaction is violent when lithium metal is in finely divided state. Lithium reacts violently with dilute acids, liberating hydrogen:
Li + 2HCl → LiCl + H2
Reaction with cold concentrated sulfuric acid is slow.
The metal dissolves in liquid ammonia, forming a blue solution, lithium amide, LiNH2:
2Li + 2NH3 → 2LiNH2 + H2
The same product also is obtained from ammonia gas.
Unlike other alkali metals, lithium reacts with nitrogen in the presence of moisture at ordinary temperatures, forming the black lithium nitride, Li3N: 6Li + N2 → 2Li3N
The above reaction is exothermic.
Lithium reacts with hydrogen at red heat forming lithium hydride:
Reactions with sulfur and selenium in liquid ammonia yield lithium sulfide and selenide, respectively:
The metal combines with chlorine and other halogens, forming their halides:
Li + Cl2 → 2LiCl
When heated with carbon at 800°C, the product is lithium carbide:
2Li + 2C→Li2C2
2Li + S→Li2S
2Li + H2→2LiH
Li + O2→2Li2O
The metal reacts with carbon dioxide at elevated temperatures, forming lithium carbonate, Li2CO3. Lithium forms alloys with several metals including aluminum, calcium, copper, magnesium, mercury, sodium, potassium, silver, tin and zinc. It combines with phosphorus, arsenic and antimony on heating, forming their binary salts: The metal behaves as a reducing agent at high temperatures. It reduces aluminum chloride to aluminum and boron oxide to boron: Lithium liberates hydrogen from ethanol, forming lithium ethoxide: 2Li + 2C2H5OH → 2C2H5OLi + H2 Several organolithium compounds have important applications in organic syntheses. These may be readily synthesized by reactions of lithium with organics. The metal reacts with alkyl or aryl halides or mercury alkyls or aryls to produce alkyl or aryl lithium.