Lorlatinib is a cyclic ether that is 16,17-dihydro-2H-8,4-(metheno)pyrazolo[4,3-h][2,5,11]benzoxadiazacyclotetradecin-15(10H)-one substituted by methyl groups at positions 2 and 10R, and by cyano, amino and fluoro groups at positions 3, 7 and 12 respectively. It is a small molecule inhibitor of ALK and ROS1 kinase developed by Pfizer for the treatment of ALK-positive non-small cell lung cancer. It has a role as an antineoplastic agent and an EC 2.7.10.1 (receptor protein-tyrosine kinase) inhibitor. It is a member of pyrazoles, a member of monofluorobenzenes, an aromatic ether, a nitrile, a member of benzamides, an azamacrocycle, an aminopyridine, a cyclic ether and an organic heterotetracyclic compound [1]. 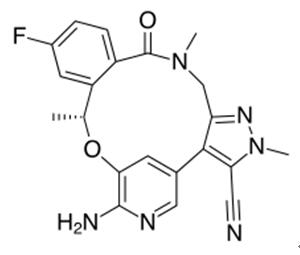 Lorlatinib is an orally available, ATP-competitive inhibitor of the receptor tyrosine kinases, anaplastic lymphoma kinase (ALK) and C-ros oncogene 1 (Ros1), with potential antineoplastic activity. Upon administration, lorlatinib binds to and inhibits both ALK and ROS1 kinases. The kinase inhibition leads to disruption of ALK- and ROS1-mediated signaling and eventually inhibits tumor cell growth in ALK- and ROS1-overexpressing tumor cells. In addition, PF-06463922 is able to cross the blood brain barrier. ALK belongs to the insulin receptor superfamily and plays an important role in nervous system development; ALK dysregulation and gene rearrangements are associated with a series of tumors. ROS1, overexpressed in certain cancer cells, plays a key role in cell growth and survival of cancer cells.

Lorlatinib is a selective tyrosine kinase receptor inhibitor used in the therapy of selected cases of advanced non-small cell lung cancer. Lorlatinib is associated with transient elevations in serum aminotransferase levels during treatment but has not been linked to instances of clinically apparent acute liver injury that have been described with other similar kinase inhibitors.

Lorlatinib has been used in trials studying the basic science and treatment of Non-small Cell Lung Cancer and anaplastic lymphoma kinase (ALK)-positive Non-Small Cell Lung Cancer (NSCLC) and ROS1-positive NSCLC. Despite initial responses from the use of various ALK inhibitors, however, it is virtually almost guaranteed that all patients with the condition in question will develop tumour progression or resistance to the current therapy in use.

Considered a third-generation ALK tyrosine kinase inhibitor (TKI) for patients with ALK-positive metastatic NSCLC, lorlatinib's most optimal place in the treatment sequence of this condition has most recently been identified with its latest approval by the US FDA in November of 2018 for the indication of treating those patients' disease which has progressed even after the use of first and second-generation TKIs like crizotinib, alectinib, or ceritinib, Label. Loratinib's ability to move past the blood-brain barrier facilitates its ability to treat progressive or worsening brain metastases as well.

Non-small cell lung cancer (NSCLC) accounts for up to 85% of lung cancer cases worldwide and remains a particularly difficult to treat condition. The gene rearrangement of anaplastic lymphoma kinase (ALK) is a genetic alteration that drives the development of NSCLC in a number of patients. Ordinarily, ALK is a natural endogenous tyrosine kinase receptor that plays an important role in the development of the brain and elicits activity on various specific neurons in the nervous system [2].

Subsequnetly, lorlatinib is a kinase inhibitor with in vitro activity against ALK and number of other tyrosine kinase receptor related targets including ROS1, TYK1, FER, FPS, TRKA, TRKB, TRKC, FAK, FAK2, and ACK Label. Lorlatinib demonstrated in vitro activity against multiple mutant forms of the ALK enzyme, including some mutations detected in tumors at the time of disease progression on crizotinib and other ALK inhibitors Label. Moreover, lorlatinib possesses the capability to cross the blood-brain barrier, allowing it to reach and treat progressive or worsening brain metastases as well [3]. The overall antitumor activity of lorlatinib in in-vivo models appears to be dose-dependent and correlated with the inhibition of ALK phosphorylation Label.