Depending on demand, benzene production from other aromatic compounds can be increased, particularly from the BTX fractions obtained from catalytic reformate, pyrolysis gasoline, or light oils from coal carbonization. Among the methods used are hydrodealkylation, disproportionation, or combination processes.

Hydrodealkylation of alkyl aromatics is a source of benzene. Toluene is the usual charge stock, although higher alkylated aromatics may be used:

Other alkylbenzenes, such as ethyl- and propylbenzene, dealkylate in a single step and form the corresponding alkanes. Both catalytic and thermal processes are used. The catalytic processes, e.g., Detol (Air Products & Chemicals) [33] and Hydeal (UOP), operate at 575 – 650 ◦C and 2.5 –6MPa. The temperature of this exothermic reaction is controlled by recycling cold hydrogen.

Thermal dealkylation processes, such as HDA (Arco and Hydrocarbon Research) and THD (Gulf Oil), operate at higher temperatures than the catalytic, but yields and reaction systems are similar in both types.

The amount of toluene in BTX from catalytic reformate is greater than that of benzene. Whether or not hydrodealkylation is used is related directly to the demand and price of benzene relative to toluene. If the relative demand for the two products changes, the dealkylation units may be placed on standby.

Detol Process. This catalytic dealkylation process is illustrated in Figure 4. Benzene is produced from a feed consisting of toluene or mixtures of toluene and other alkylated benzenes. The alkylated aromatics and hydrogen pass at elevated temperature and pressure over a fixed-bed dealkylation catalyst, generally dispersed in more than one reactor in series. Heat exchangers cool the reactor products and condense benzene, unreacted toluene, and the heavier unreacted alkylated benzenes. A high-pressure flash drum separates recycle hydrogen and product gas. The gas is split into streams for fuel gas, for hydrogen purification if needed, and for recycle hydrogen.

The product gas from the flash drum is condensed and the liquid pumped to a stabilizer, where remaining gas and low-boiling hydrocarbons are driven off and utilized as fuel gas. The bottoms from the stabilizer are clay treated and passed to a column where the benzene is distilled overhead. Unreacted toluene and heavier aromatics are recycled. The benzene produced in yields of around 99 mol% is highly pure, typically 99.95 %, with a freezing point of 5.45 ◦C. Minor side reactions, such as hydrocracking and hydrogenation, occur and produce small amounts of light hydrocarbons and also eliminate sulfur compounds (e.g., thiophene). Catalyst cycle life in these dealkylation processes is long, as it is in other high-pressure reactions carried out in the presence of hydrogen. As of 1981 twelve commercial Detol plants had been licensed.

Hydeal Process.This process was developed jointly by Ashland Oil and UOP. The process is similar to the Detol one described previously. Toluene alone or in mixtures containing xylenes and other alkylated benzenes is charged to the catalytic reactor, which contains a chromia – alumina catalyst. Hydrogen is added along with the alkyl aromatics. Nitration-grade benzene is obtained in yields of ca. 98 mol%. Unreacted aromatic charge material from the once-through operation is recycled to obtain practically complete conversion. The process is also used to hydrodealkylate alkylnaphthalenes. 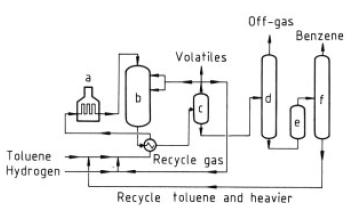 HDA Process.This process, developed by Arco and Hydrocarbon Research, operates at 600 – 660 ◦C and at gauge pressures of 3.45 – 6.9MPa (see Fig. 5). Operation is similar to that of the catalytic processes, with benzene yields of 99 mol%. The small amounts of diphenyls formed are recycled and a lowequilibrium concentration is maintained, permitting high benzene yields.

THD Process. This Gulf process is similar to the other thermal processes.

MHC Process. Mitsubishi Petrochemical Co. has described a thermal dealkylation process known as MHC. Methods are emphasized for controlling condensation reactions and coke formation. The following advantages are claimed for the MHC process. Feedstocks containing up to 30 % of nonaromatics can be handled without resorting to aromatic extraction and fractional distillation steps. The process will operate on low-purity hydrogen, thus reducing the amount of makeup hydrogen required. Benzene of 99.95 % purity is readily achieved. Figure 6is a flow sheet of the MHC process.

Processes have been developed to disproportionate or transalkylate alkylated aromatics to produce benzene and alkylated benzenes. For example, the Tatoray process (UOP and Toray Industries, see Fig. 7) [43–45] produces benzene and equilibrium xylenes from toluene or from a mixture of toluene and C9 aromatics:

The reaction proceeds with a high H2 recycle rate over a noble-metal or rare-earth catalyst. Operating conditions are 350 – 525 ◦C and 1–5MPa.

Benzene of high purity (fp 5.45 ◦C) and xylenes containing<10−9 parts of saturated hydrocarbons are produced. When the feedstock is limited to C9 and C10 aromatics, a mixture of benzene, toluene, and xylenes results. Typical yields with toluene as the charge are about 97 %. Yields for both a pure toluene feed and a mixed feed of toluene and C9 + aromatics are shown in Table 12. 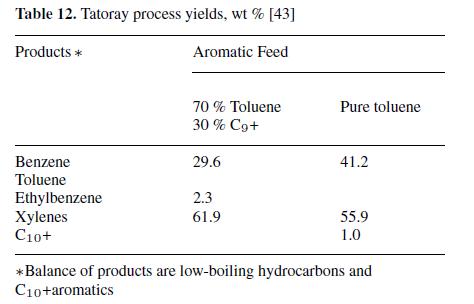 Four commercial units were in operation in 1981 and others were being designed or built.

Several combination dealkylation processes have been developed for producing benzene from impure BTX feedstocks. The Houdry Division of Air Products developed the Pyrotol process [46], [47] by a combination of hydrogenation and dealkylation (Fig. 8).

Essentially the process involves fractionation of the feed to remove C5 minus and C9 plus material from the crude BTX. The C6–C8 is vaporized and passes to a catalytic pretreat reactor for selective hydrogenation of diolefins, cyclic diolefins, and styrene. The effluent from the pretreat reactor is subsequently charged to the Pyrotol reactors, where aromatics are dealkylated to benzene. Other reactions include desulfurization and hydrocracking of nonaromatics. Unreacted toluene and heavier aromatics from the first pass are recycled. The benzene product contains less than 0.5 ppm of thiophene and has a freezing point of at least 5.47 ◦C. Table 13 contains typical yield data. As of 1982 thirteen plants had been licensed.

A somewhat similar process was developed by the Houdry Division of Air Products and by Bethlehem Steel. The Litol process has been in operation in the United States and other countries. It produces pure benzene from aromatic light oil obtained from coal carbonization [48]. This process, as the Pyrotol process, utilizes two catalytic reaction stages. After prefractionation of the rawlight oil to remove C5 and lighter fractions overhead and C9 and heavier as bottoms, the C6–C8 fraction is vaporized.

At the first stage diolefins and styrene are hydrogenated. The effluent then contacts the Litol chromia – alumina catalyst at 500 – 600 ◦C, where desulfurization, hydrocracking, and dealkylation occur. Benzene purity of 99.97 % with freezing point of 5.5 ◦C and a thiophene content of less than 0.5 ppm are typical.

In 1968 a modified Litol process was developed. This modified process is designed to include a heavier fraction of the light oil, mostly C9s and heavier, along with the secondary light oil (C6–C8) normally used in the process. The lighter fraction typically contains around 70 % benzene, 20 % toluene, and 6% xylenes and ethylbenzene. The primary, or heavier fraction of the light oil, has a typical boiling range of 180 – 260 ◦C and is composed mainly of C9 and heavier aromatics. Pilot plant operation indicates that a 50 – 50 mixture of the lower and higher boiling range light oils can be processed.

Mitsubishi Petrochemical Co. described a process [50] for producing benzene from pyrolysis gasoline by a combination method similar to those discussed previously. After a two-stage hydrogenation a solvent was used to extract the aromatics. Alternatively, the hydrogenated material was reacted in Mitsubishi’s MHC process [42], [51], [52]. Advantages of the process are low-temperature liquid-phase operation of the first stage with no need for hydrogenated product recycling, and a reactor design incorporating an improved method for controlling temperature of the exothermic reactions.

Mobil Chemical Co. has developed an aromatics processing catalyst and a process for the liquid-phase disproportionation of toluene to form benzene and xylenes (Fig. 9) [53], [54]. This low-temperature – disproportionation process (LTD) employs a zeolite-based catalyst of high activity which permits the reaction to proceed at temperatures as low as 260 ◦C; gauge pressure is 4.5MPa. No hydrogen recycle is required in this liquid-phase process. An hourly mass-space velocity is standard. A catalyst life of 1.5 years is claimed with infrequent regenerations. With fresh or regenerated catalyst the initial reactor temperature is 260 ◦C. As the catalyst slowly deactivates, the temperature is raised in increments to 315 ◦C; then the catalyst is regenerated by burning accumulated coke. 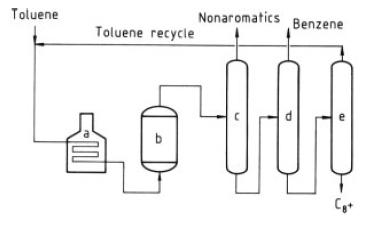 After cooling the reactor effluent passes to three distillation columns arranged in series. In the first column non-aromatics plus a small amount of benzene are taken overhead. This benzene may be recovered by extraction if deemed necessary. Benzene is taken overhead as product in the second column and toluene is distilled overhead for recycle in the third column. Xylenes and heavier aromatics are withdrawn as bottoms from this last column. The C9 + aromatics may be recycled. Toluene conversion on a once-through basis is around 45%and the balance is recycled to extinction. Table 14 contains a typical wt% composition of the toluene fresh feed and the end product.