Glycyrrhiza glabra is an herbaceous plant native to southern Europe. It grows wild in Eastern Europe. The plant is 1 to 2 m (3 to 7 ft) tall and has a large creeping root (the secondary roots are branched), erect stalk, alternate leaves, violet flowers (from June to July) and kidney-shaped seeds. The parts used are the stolons and roots (at least 2 years old). Most commercial licorice is extracted from varieties of G. glabra. Licorice is intensely sweet. The sweetening power comes from glycyrrhizin, which is 50 times sweeter than sucrose.

Licorice is a shrub found in subtropical climates

Licorice is a flavoring agent made from dried root portions of glycyrrhiza glabra. The obtainable forms are root, extract powder, and extract. The extract is used in candy, baked goods, and beverages; the major use is in tobacco.

A variety of chemicals including ammonia and oleanane triterpenoids have been reported present in the licorice root. The root is mainly cultivated for the glycoside glycyrrhizin that, depending on growing conditions, varies in amount from 7 to 10%.

The most common variety used for medicinal purposes is Glycyrrhiza glabra var. typica. Licorice has been used since Roman times and was described in early Chinese writings. CHEMISTRY The root and rhizomes of the licorice plant contain 5% to 9% of a steroidal glycoside called glycyrrhizin . In the glycoside form, glycyrrhizin is 150 times sweeter than sugar. Also present are triterpenoids, glucose, mannose, and sucrose. Concentrated aqueous extracts may contain 10% to 20% glycyrrhizin.
When the herb is ingested, the intestinal flora catalyze the conversion of glycyrrhizin into glycyrrhetic acid , the pharmacologically active compound. Glycyrrhizin and glycyrrhetic acid possess mild anti-inflammatory properties. Glycyrrhizin appears to stimulate gastric mucus secretion. This may be the origin of the antiulcer properties of licorice. Glycyrrhizin and glycyrrhetic acid do not act directly as steroids. Instead, they potentiate, rather than mimic, endogenous compounds.
Licorice exerts its protective effects on the gastric mucosa by inhibiting two enzymes, 15-hydroxyprostaglandin dehydrogenase and Δ13prostaglandin reductase. Inhibition of these enzymes causes their substrates to increase in concentration, increasing the levels of prostaglandins in the gastric mucosa and causing a cytoprotective effect. The acid also inhibits 11-β-hydroxysteroid dehydrogenase, thus increasing the glucocorticoid concentration in mineralocorticoid- responsive tissues, causing increased sodium retention, potassium excretion, and blood pressure. 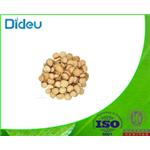