Mucic acid,C6H10O8 or HOOC-(CHOH)4-COOH, (also known as galactaric or meso - galactaric acid) is an aldaric acid obtained by nitric acid oxidation of galactose or galactose - containing compounds like lactose, dulcite, quercite, and most varieties of gum.
It forms a crystalline powder, which melts at 230°C. It is insoluble in alcohol, and nearly insoluble in cold water. Due to the symmetry in the molecule, it is optically inactive even though it has chiral carbon atoms (i.e., it is a meso compound). When heated with pyridine to 140°C, it is converted into allommic acid. When digested with fuming hydrochloric acid for some time it is converted into a furfural dicarboxylic acid while on heating with barium sulfide it is transformed into athiophene carboxylic acid. The ammonium salt yields on dry distillation carbon dioxide, ammonia, pyrrol and other substances. The acid when fused with caustic alkalis yields oxalic acid. With potassium bisulfate mucic acid forms 3-hydroxy-2-pyrone by dehydration and decarboxylation.

Mucic acid can be used to replace tartaric acid in self-rising flour or fizzies.

Mucic acid is used to replace tartaric acid in self-rising flour or fizzies. It is also used as a precursor of adipic acid en route to nylon by a rhenium-catalyzed deoxydehydration reaction. It replaces potassium bitartrate in baking powder and also used for manufacture of granular effervescing salts. 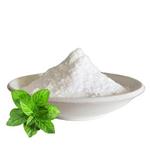