Stability:
Reacts violently with water, liberating and possibly igniting hydrogen. Flammable solid. Incompatible with water, strong oxidizing agents. Do not store near oxidants. Store under oil, or dry inert gas. Air sensitive.
Water Solubility
REACTS
Sensitive
Air & Moisture Sensitive
Merck
14,8570
History
Long recognized in compounds, sodium was first isolated by Davy in 1807 by electrolysis of caustic soda. Sodium is present in fair abundance in the sun and stars. The D lines of sodium are among the most prominent in the solar spectrum. Sodium is the sixth most abundant element on earth, comprising about 2.6% of the Earth’s crust; it is the most abundant of the alkali group of metals of which it is a member. The most common compound is sodium chloride, but it occurs in many other minerals, such as soda niter, cryolite, amphibole, zeolite, sodalite, etc. It is a very reactive element and is never found free in nature. It is now obtained commercially by the electrolysis of absolutely dry fused sodium chloride. This method is much cheaper than that of electrolyzing sodium hydroxide, as was used several years ago. Sodium is a soft, bright, silvery metal that floats on water, decomposing it with the evolution of hydrogen and the formation of the hydroxide. It may or may not ignite spontaneously on water, depending on the amount of oxide and metal exposed to the water. It normally does not ignite in air at temperatures below 115°C. Sodium should be handled with respect, as it can be dangerous when improperly handled. Metallic sodium is vital in the manufacture of sodamide and esters, and in the preparation of organic compounds. The metal may be used to improve the structure of certain alloys, to descale metal, to purify molten metals, and as a heat transfer agent. An alloy of sodium with potassium, NaK, is also an important heat transfer agent. Sodium compounds are important to the paper, glass, soap, textile, petroleum, chemical, and metal industries. Soap is generally a sodium salt of certain fatty acids. The importance of common salt to animal nutrition has been recognized since prehistoric times. Among the many compounds that are of the greatest industrial importance are common salt (NaCl), soda ash (Na2CO3), baking soda (NaHCO3), caustic soda (NaOH), Chile saltpeter (NaNO3), diand tri-sodium phosphates, sodium thiosulfate (hypo, Na2S2O3 · 5H2O), and borax (Na2B4O7 · 10H2O). Seventeen isotopes of sodium are recognized. Metallic sodium is priced at about $575/kg (99.95%). On a volume basis, it is the cheapest of all metals. Sodium metal should be handled with great care. It should be kept in an inert atmosphere and contact with water and other substances with which sodium reacts should be avoided.
Uses
Sodium is a metal element that performs bodily functions.
Uses
This soft silvery metal occurring as chlorine in seawater was first isolated as an element by Humphry Davy in 1807. Sodium is one of the essential elements required by living organisms and it is highly reactive oxidizing in air and reacting with water. Sodium chloride was the first halide to be combined with silver for photographic purposes. Many of the sodium compounds were also used in gold toning baths. Some of them are included here.
CAS DataBase Reference
7440-23-5(CAS DataBase Reference)
NIST Chemistry Reference
Sodium(7440-23-5)
EPA Substance Registry System
7440-23-5(EPA Substance)

Description
Sodium was first isolated by Sir Humphry Davy in 1807 by electrolysis of caustic soda. In the following year, Gay Lussac and Thenard obtained metallic sodium by chemical reduction of caustic soda with iron at elevated temperatures. Deville, in 1854, prepared the metal by reduction of sodium carbonate and lime with charcoal at a temperature above the boiling point of sodium. Castner, in 1886, improved the chemical reduction process preparing the metal by heating sodium hydroxide with iron carbide at high temperature. Five years later he patented a process based on electrolytic reduction of sodium hydroxide. The first major commercial plant was set up in 1921 with the introduction of Downs cell.
The element derived its name from the Latin word sodanum meaning “headache remedy.” Its symbol Na was derived from the Latin word, natrium. 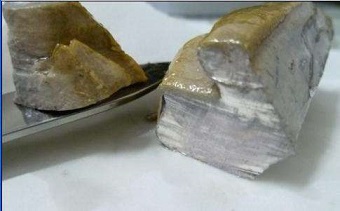 Sodium is the sixth most abundant element on earth. It comprises about 2.6% weight of the earth’s crust. Its salt, sodium chloride, is the major component of seawater. The concentration of sodium in seawater is 1.08%. As a very reactive element, sodium is never found in free elemental form. It occurs in nature in many minerals such as cryolite, amphibole, zeolite, sodalite, and soda niter. Sodium chloride (NaCl) is the most common salt of sodium. Some other important salts are caustic soda (NaOH), soda ash (Na2CO3), baking soda (NaHCO3), Chile saltpeter (NaNO3), borax (Na2B4O7•10H2O), sodium thiosulfate (Na2S2O3), sodium sulfate (Na2SO4), and sodium phosphates.
Uses
Metallic sodium is a strong reducing agent, used in many organic syntheses. It is used in the manufacture of sodamide, sodium peroxide, and esters. Other uses are in purifying molten metals, to descale metal, to improve structure of certain alloys, and as a heat transfer agent, for example, in nuclear reactors. Sodium is useful in producing other metals, such as titanium. It is used in sodium vapor lamps in small amounts. Sodium wire is used to remove traces of water from organic solvents.
Production Methods
Sodium metal is produced by both electrolytic and chemical reduction processes. All commercial processes employed today are based on electrolytic methods. Such processes are in wide use since Davy prepared the metal the first time in 1807.
There are two electrolytic methods that are of major importance. One involves the electrolysis of fused sodium chloride using the Downs cell. This method currently is most prevalent. The Downs cell consists of a steel cell with brick lining containing the fused bath. The multiple electrode arrangement consists of four cylindrical graphite anodes that project upward from the base of the cell. Each anode is surrounded by a diaphragm of iron gauge and a steel cathode.
Fused sodium chloride is electrolyzed at bath temperature varying between 565 to 600°C at a cell voltage of 5.7 to 7 V and the cell current varying from 25 to 35 kA. The cathode current density is mostly about 9.8 kA/m2. Often calcium chloride is added to sodium chloride in the cell bath to lower its melting point. Calcium is largely removed from sodium by filtration at about 110°C. Other electrolyte compositions have been used in which calcium is partially or fully replaced. The cell feed must be free of sulfate and other impurities.
Electrolysis of fused sodium hydroxide has been achieved successfully with a Castner cell. The Castner cell was used in commercial production prior to introduction of Downs cell. The cell is operated at a bath temperature 320 ± 10°C, at 9.0 ± 0.5 amp current and a voltage of 4.3 to 5.0 V. The cathode current density is about 10.9 kA/m2. The cell consists of a copper cathode and a nickel anode and a cylindrical iron-gauge diaphragm placed between the electrodes. The cell reactions are as follows:
cathode: 4Na+ + 4e¯ → 4Na
SODIUM 847anode: 4OH¯ – 4e¯ → 2H2O + O2
Water generated at the anode diffuses through the diaphragm and goes to the cathode, reacting with sodium to form sodium hydroxide.
2H2O + 2Na → 2NaOH + H2
The overall change may be represented as:
2NaOH → 2Na + H2 + O2
Because water is reacting with sodium produced at the cathode, the yield of sodium is reduced almost by 50%. Lesser yield is the major disadvantage of the Castner process. At present, this process is not used commercially.
Thermal reduction processes are not being practiced anywhere in the world at present for large-scale production of sodium. Such methods, however, can be conveniently adapted for laboratory preparation of metallic sodium. Sodium can be prepared by thermal reduction of its hydroxide, carbonate, or chloride at elevated temperatures. These salts are heated with carbon, calcium carbide, iron carbide, ferrosilicon, or other reducing agents at temperatures above 800°C under vacuum:
6NaOH + 2C → 2Na + 2Na2CO3 + 3H2
Na2CO3 + 2C → 2Na + 3CO
2NaCl + CaC2 → 2Na + CaCl2 + 2C