Description
Rosavins are a collection of compounds which include, rosavin, rosin and rosarin. They are known as a cinnamyl alcohol glycoside belonging to a group of compounds known as phenylpropanoids. They are amongst the main active phytochemical components in Rhodiola rosea, but studies remain inconclusive on how they specifically operate and their mechanisms of action. Some research suggests that rosavins may not be effective on their own, but must be combined with other more powerful compounds, like salidroside, to exhibit potential effects.
neuropharmacological activity
A number of studies have revealed that salidroside exhibits neuroprotective activities, including anti-Alzheimer’s disease, anti-Parkinson’s disease, anti-Huntington’s disease, anti-stroke, anti-depressive effects, and anti-traumatic brain injury; it is also useful for improving cognitive function, treating addiction, and preventing epilepsy. The mechanisms underlying the potential protective effects of salidroside involvement are the regulation of oxidative stress response, inflammation, apoptosis, hypothalamus-pituitary-adrenal axis, neurotransmission, neural regeneration, and the cholinergic system. Being free of side effects makes salidroside potentially attractive as a candidate drug for the treatment of neurological disorders.
in vitro
Salidroside (100 μM) inhibits prolyl endopeptidase (PEP) activity (10.6±1.9%). Prolyl endopeptidase is an enzyme that plays a role in the metabolism of proline-containing neuropeptidase which is recognized to be involved in learning and memory. Salidroside, one of the major phenylpropanoid glycosides found in R. rosea L, is consumed almost daily as a nutritional supplement in many countries and has been identified possessing potential anti-fatigue and anoxia,anti-aging, and anti-Alzheimer's disease activities. Salidroside can improve muscle nutrition via increasing mTOR, p-mTOR, and MyHC expression. SH-SY5Y cells are exposed to 0-600 μM MPP+ for 12-48 h and the results show that MPP+ results in a significant decrease of cell viability in a concentration and time-dependent manner. Cells are pretreated with 25-100 μM Salidroside (Sal) for 24 h and then exposed to 500 μM MPP+ for an additional 24 h. Salidroside concentration-dependently prevents MPP+-induced decrease of cell viability. Annexin V/PI staining is a common method for the detection of apoptotic cell. Salidroside significantly decreases the number of Annexin V/PI-stained cells treated by MPP+ which is in a concentration-dependent manner. Apoptotic cell could also be morphologically evaluated by Hoechst staining. In Hoechst staining, apoptotic cells are characterized by reduced nuclear size, chromatin condensation, intense fluorescence, and nuclear fragmentation. Salidroside notably inhibits MPP+-induced increase of chromatin condensation, intense fluorescence, and nuclear fragmentation in SH-SY5Y cells.
In Vivo
Salidroside is a natural antioxidant extracted from medicinal food plant Rhodiola rosea. Salidroside (100 mg/kg/day) shows strong glucose lowering effect on db/db mice which is similar to effect of Metformin (200 mg/kg/day). For this reason, the dose of 100 mg/kg/day salidroside is used.
pharmacological properties
Salidroside (Rhodioloside), a phenylpropanoid glycoside isolated from Rhodiola rosea, has been reported to have a broad spectrum of pharmacological properties. Salidroside is a prolyl endopeptidase inhibitor. Salidroside alleviates cachexia symptoms in mouse models of cancer cachexia via activating mTOR signalling. Salidroside protects dopaminergic neurons by enhancing PINK1/Parkin-mediated mitophagy.
Biological activity
Salidroside is a glycoside that has been found in R. rosea and has diverse biological activities, including antioxidant, anti-apoptotic, neuroprotective, and anti-inflammatory properties.1,2,3,4,5 It scavenges 2,2-diphenyl-1-picrylhydrazyl and ABTS radicals with EC50 values of 81.54 and 30.94 µg/ml, respectively, in cell-free assays.2 Salidroside (50 and 100 µM) inhibits apoptosis and production of reactive oxygen species (ROS) induced by amyloid-β (25-35) (Aβ (23-35)) in SH-SY5Y neuroblastoma cells.3 It decreases infarct volume by 17.9% in a rat model of focal cerebral ischemia-reperfusion injury induced by transient middle cerebral artery occlusion (MCAO) when administered at a dose of 12 mg/kg.4 Salidroside (20, 50, and 100 mg/kg, p.o.) increases survival and reduces plasma alanine aminotransferase (ALT), aspartate aminotransferase (AST), TNF-α, and malondialdehyde (MDA) levels in a mouse model of liver injury induced by acetaminophen.
Plant extracts
Salidroside is a compound that extracted from dry roots, rhizomes or the whole dry body of Rhodiola wallichiana (Crassulaceae), with the function of preventing cancer, enhancing immunologic function, anti-aging, anti-fatigue, anti-anoxia, anti-radiation, dual-direction regulation of central nervous system, and repairing and protecting the body and so on. It is commonly used as a treatment for chronic diseases and frail susceptible patients. Clinically, it is used for the treatment of neurasthenia and neurosis, and for improving attention and memory, high altitude polycythemia and hypertension. As a nervous stimulant, it is used to improve intellectual capacity, vegetative nervous system, vascular dystonia and myasthenia; it is also used for the treatment of diseases with increased free radical, such as cancer, radiation damage, emphysema, and senile cataracts; also used as a tonic for impotence. Salidroside preparation is also used in sports medicine and aerospace medicine, in health protection for people who work under various special environmental conditions.
Rhodiola has the functions of adaptogen and dual-direction regulation. After microwave radiation, monoamine neurotransmitters and cyclic adenosine monophosphate in spleen and thymus, lymphocyte transformation rate, and serum hemolysin in the brain of mice show prohibitive changes, and Rhodiola can make the changes back to normal. After injection of Salidroside, the functions of thyroid and adrenal in rabbits enhanced, and the secretion function in eggs of mouse was excited. It can improve concentration and memory and increase the level of β-indoxyl in plasma and prevent changes of stress hormones.
Uses
Antibacterial effects; cardiovascular protection, effective anti-oxidant, anti-cancer activity, enhancing memory, anti-radiation effect.
Rhodiola crenulata (Crassulaceae)
Rhodiola has nearly 100 species in the world, and they mainly distribute in the Himalayas, north-west Asia and North America. There are more than 80 species in China, mostly distributing in the southwest, northwest, north and northeast regions, and the main producing areas are Jilin, Hebei, Qinghai, Xinjiang, Sichuan, Yunnan, Guizhou, Tibet etc.
Rhodiola is a new developed important plant source of anti-fatigue, anti-aging and anti-anoxia medicines. Rhodiola extract is a product that extracted from dried rhizome of Rhodiola rosea L. as raw materials. Commercial extract generally contains 4% Salidroside. 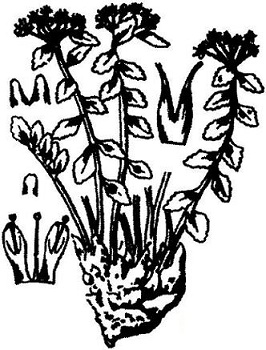 Pharmacological effects
1. Anti-fatigue effects: taking in Rhodiola kirilowii orally can prolong climbing time, swimming time and load swimming time in mice, and shorten the time required for recovery from fatigue, and improve levels of enzymes, RNA and protein, thus helping muscle to recover after fatigue as soon as possible.
2. The impact on the central nervous media: Rhodiola can normalize the content of 5-hydroxytryptamine under swimming conditions, meaning that the media content of central nervous is corrected to normal levels. Injection of salidroside (30-300mg/kg) can reduce the level of 5-hydroxytryptamine.
3. Anti-hypoxia effects: taking in Rhodiola kirilowii extract orally can make test animals show antagonism to all kinds of hypoxic mode, and the effect is stronger than that of ginseng and Acanthopanax.
4, Anti-aging effects: Rhodiola extract can increase the activity of red blood cells and liver SOD in rat and has the potential to increase the activity of myocardium SOD. Parasarcophaga similis can significantly prolong lifespan after taking in Rhodiola extract, and the rate of life extension is better than ginseng. Rhodiosin is known to promote 2BS cell proliferation and reduce mortality, and it can inhibit lipid peroxidation in rat and enhance the activity of superoxide dismutase.
5. Anti-tumor: Rhodosin has certain inhibition on S180 cells, and this effect was enhanced with increasing concentration in the non-toxic dose range. Continuously taking in Rhodiola extract orally can reduce the cancer-leading damage degree of rubomycin on intestinal wall in mice, and enhance the body's anti-cancer ability.
6. Detoxification: Salidroside can antagonize the intoxication of strychnine and improve the survival rate of mice with strychninism poisoning to 50%; it also has an antagonistic effect on Corynebacterium toxins and can protect against tetanus and other bacterial toxins, increasing the survival time or survival rate of the mice that take in potent poison, cyanide, or sodium nitrite.
Quantitative analysis of component of the natural medicine Rhodiola
[the test] Rhodiola kirilowii and dried roots, rhizomes or dry body of another species under genus Rhodiola, R. Sachalinensis .
(1) Chromatographic conditions: Column: μ-Bondapak ODS column (3.9mm × 30cm, 10μm); mobile phase: methanol-water (2: 8); flow rate: 1.0ml/min; column temperature: room temperature; detecting wavelength: 276nm .
(2) Preparation of the reference solution: accurately weighed appropriate amount of reference substance of Salidroside, and added methanol to produce the reference solution containing 0.04mg Salidroside per ml.
(3) Preparation of the sample solution: weighted precisely 1g the crude drug powder and placed it to Soxhlet extractor, and added 30ml methanol to extract for 2h; the extract was filtered and the filtrate was placed in a 50ml flask, and added methanol to the mark line and took it as the sample solution.
(4) Determination: took 10μl sample solution and 10μl reference solution to do sample injection and analyze.
(5) Chromatograms 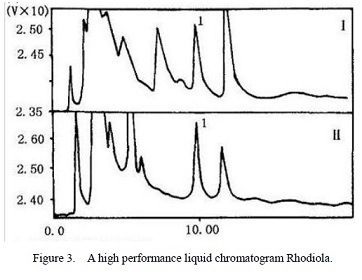 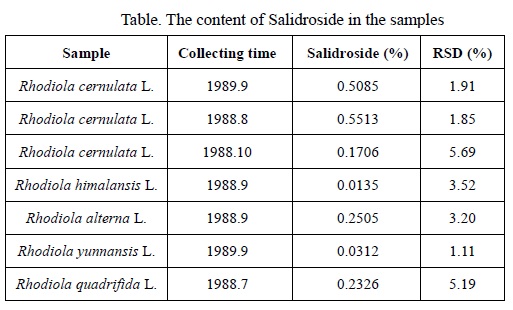 Methods of Extraction and Isolation of Salidroside
Crush roots and rhizomes of Rhodiola into coarse powder and do reflux extraction with 70% ethanol, and fractionate the extracts and recover ethanol by depressurization, and add equal amount of water to the concentrate and stir, standing and flitting for 3 times. The filtrate is concentrated under reduced pressure, followed by the application of petroleum ether, chloroform, ethyl acetate, n-butanol, ethyl acetate and n-butanol to recover the solvent, respectively, and crude tyrosol and crude salidroside can be gained.