What is Isopropyl alcohol?

Isopropanol is also known as isopropyl alcohol. It is the simplest secondary alcohol and is one of the isomers of n-propanol. It is a kind of flammable liquid which is colorless with strong smell being similar to the smell of the mixture of ethanol and acetone. It is soluble in water, alcohol, ether, benzene, chloroform and most organic solvents and is miscible with water, alcohol, ether and can form azeotrope with water. As an isopropyl group linked to a hydroxyl group, it is the simplest example of a secondary alcohol, where the alcohol carbon atom is attached to two other carbon atoms. It is a structural isomer of 1-propanol and ethyl methyl ether.It is used in the manufacture of a wide variety of industrial and household chemicals and is a common ingredient in chemicals such as antiseptics, disinfectants, and detergents. 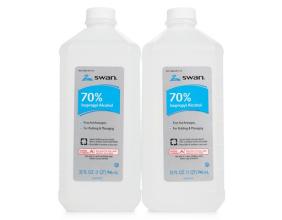 Isopropyl alcohol is miscible in water, ethanol, ether, and chloroform. It dissolves ethyl cellulose, polyvinyl butyral, many oils, alkaloids, gums and natural resins.[9] Unlike ethanol or methanol, isopropyl alcohol is not miscible with salt solutions and can be separated from aqueous solutions by adding a salt such as sodium chloride. The process is colloquially called salting out, and causes concentrated isopropyl alcohol to separate into a distinct layer.

In 1855, Frenchman M. Berthelot first reported the production of isopropanol through the hydration reaction between propylene and sulfuric acid, called indirect hydration. In 1919, the Americans C. Ellis had conducted industrial development on this. At the end of 1920, the American Standard Oil Company of New Jersey adopted the approach of Ellis Act and established the production equipment for putting into formal production. In 1951, the British company Imperial Chemical Industries began to produce isopropanol with the direct hydration method from propylene. Since then, many countries have used this method and made related improvements.
Indirect hydration reaction: propylene is first reacted with sulfuric acid to obtain isopropyl hydrogen sulfate, which generates isopropanol after hydrolysis, and the reaction of the formula:
CH3CH = CH2 + H2SO4 → (CH3) 2CHOSO3H
(CH3) 2CHOSO3H + H2O─ → (CH3) 2CHOH + H2SO4
the concentration of the applied sulfuric acid is generally greater than 60% (by mass), and the reaction is conducted at 2~2.8MPa and 60~65 ° C; The hydrolysis reaction happens at slight increased pressure and at below 30 ° C.

Isopropyl alcohol is an important chemical products and raw materials. It is mainly applied to various fields including pharmaceutical, cosmetics, plastics, fragrances, paint as well as being used as the dehydrating agent and cleaning agent in and electronics industry. It can also be used as the reagent for determination of barium, calcium, magnesium, nickel, potassium, sodium and strontium. It can also be used as the reference material of chromatographic analysis.
In the manufacturing industry of circuit board, it is used as a cleaning agent, and the production of PCB holes for conductivity. Many people find that it can not only clean the motherboard with excellent performance, but also get the best results. In addition, it is used for other electronic devices, including cleaning disc cartridge, floppy disk drives, magnetic tape, and the laser tip of the disc driver of CD or DVD player.
Isopropyl alcohol can also be used as the solvent of oil and gel as well as for the manufacture of fishmeal feed concentrate. Low-quality isopropanol can also be used in automotive fuels. As the raw material of production of acetone, the usage amount of isopropanol is reducing. There are several compounds which are synthesized from isopropanol, such as isopropyl ester, methyl isobutyl ketone, di-isopropylamine, di-isopropyl ether, isopropyl acetate, thymol and many kinds of esters. We can supply isopropanol of different quality depending on the end use it. The conventional quality of anhydrous isopropanol is more than 99%, while the special grade isopropanol content is higher than 99.8% (for flavors and drugs).
In many cases, isopropanol can substitute ethanol as the solvent and is a good solvent and chemical raw materials which can be applied to not only painting, pharmaceuticals, pesticides, cosmetics and other industries, but also the production of acetone, isopropyl ester, isopropylamine (the raw material for production of atrazine), di-isopropyl ether, isopropyl acetate and thymol crystal etc. It was the first product which is made from the petroleum raw material in the history of the development of petrochemicals.

Isopropyl alcohol is well known to cause ocular surface irritation, epithelial keratitis and occasional corneal abrasion. Most commonly, isopropyl alcohol comes into contact with the eye surface during Goldmann applanation tonometry. Tonometer tips are frequently cleaned with a wipe saturated in 70% isopropyl alcohol or soaked for at least 5 minutes in a 70% solution (the method recommended by the US Center for Disease Control) and applied to the corneal surface. If this is done before the alcohol has completely dried, a familiar round epithelial defect, a burning sensation or frank eye pain may ensue. Another potential route of ocular injury includes pre-surgical preparation of the peri-ocular skin with alcohol wipes. Occupational exposures to isopropyl alcohol vapors have been reported to cause eye irritation but no significant injury.
Its vapor can cause slight irritation on the eyes, nose and throat; it can be absorbed through the skin. Its vapor can form explosive mixture with air. Its explosion limit is 2.0% to 12% (by volume). It belongs to a moderate explosive hazardous material and flammable, low toxic substance. The toxicity of its vapors is twice as high as ethanol while oral administration causes the opposite toxicity.