ε-Caprolactone or simply caprolactone is a lactone (a cyclic ester) possessing a seven-membered ring. Its name is derived from caproic acid. This colorless liquid is miscible with most organic solvents and water. 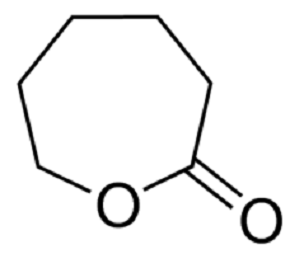 ε-Caprolactone is a lactone building block used for the preparation of titanium alkoxides based on benzotriazole phenoxide ligands. It is also a monomer used in the production of highly specialised polymers. Ring-opening polymerization, for example, gives polycaprolactone.Another polymer is polyglecaprone, used as suture material in surgery.

Caprolactone was once produced as a precursor to caprolactam. Caprolactone is treated with ammonia at elevated temperatures to give the lactam: (CH2)5CO2 + NH3 → (CH2)5C(O)NH + H2O Carbonylation of caprolactone gives, after hydrolysis, pimelic acid. The lactone ring is easily opened with nucleophiles including alcohols and water to give polylactones and eventually the 6-hydroxyadipic acid.

Several other caprolactones are known. These isomers include α-, β-, γ-, and δ-caprolactones. All are chiral. (R)-γ-caprolactone is a component of floral scents and of the aromas of some fruits and vegetables, and is also produced by the Khapra beetle as a pheromone.δ-caprolactone is found in heated milk fat. An ether of caprolactone is used as a binder for AP/AN/Al rocket propellant HTCE: Hydroxy-Terminated Caprolactone Ether.