The use of pivaldehyde in organic synthesis

Pivaldehyde is an organic compound, more specifically an aldehyde. The structure shows that it is a line-angle representation of this organic aldehyde, whose systematic name, 2,2-dimethylpropanal, is based on the longest carbon chain (three carbons), ending in "-al" to indicate the aldehyde functionality, and where another descriptive synonym is trimethylacetaldehyde. Pivaldehyde is an example of an aldehyde with the tertiary-butyl group (with 3 methyl groups), attached to the carbonyl (C=O) [1].

Pivalaldehyde has been shown to be one of several aldehydes that function as effective reductants in the oxidation of alkenes to epoxides by molecular oxygen [2]. In the process, which is most often metal catalyzed, the aldehyde is oxidized to the corresponding carboxylic acid. At least two different mechanisms appear to be operating. In the nickel (II)-catalyzed case, the oxidation occurs through a singlet oxygen-type species. The reaction is characterized by the loss of stereochemistry in the oxidation of both cis- and trans-2-butene. In addition, the epoxidation of cholesteryl benzoate affords a 31:69 mixture of stereoisomers, with the β-isomer as the major component. This result is opposite to those from more traditional expoxidation reagents (m-Chloroperbenzoic Acid, MMPP), which afford the α-epoxide as the major product. Pivalaldehyde is not an effective reductant in the nickel(II)-catalyzed Baeyer–Villiger oxidation of ketones, but is the most effective aldehyde in the manganese(III)-catalyzed enantioselective epoxidation of 1,2-dihydronaphthalene by oxygen in the presence of various enantiomerically pure salen ligands (Scheme 1).

Scheme 1 The synthesis of enantiomerically pure salen ligands with Pivaldehyde

Epoxidations can also be effected without the use of metal catalysts. In this case it appears as if peroxy acids (formed by oxygen interacting with pivalaldehyde) are the ultimate oxidizing agent. Pivalaldehyde is the most effective aldehyde of those studied in this reaction, which show the usual profile of reactivity and selectivity expected for a peroxy acid oxidation (scheme 2).

Basic isoreticular metal-organic framework (IRMOF-3) porous nanomaterial is utilized not only to accelerate a number of synthetic reactions, but also it is a green catalyst to increase reaction rates and yields [3]. 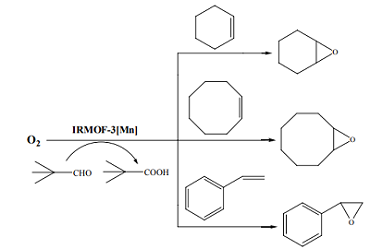 The epoxidation of alkenes was carried out using molecular oxygen at atmospheric pressure in a twin necked round flask equipped with a condenser. In a typical run, 1 mmol of substrate, 2 mmol of trimethylacetaldehyde, 5 mL of toluene, and 0.015 g of catalyst were placed in an oil bath at the desired reaction temperature while molecular oxygen was bubbled at atmospheric pressure accompanied by shaking of the mixture. After completion of the reaction, the catalyst was filtered off and the selectivity and conversion were measured using GC. A hot filtering experiment was carried out by separating the catalyst quickly from the reaction mixture after 90 minutes reaction time, and the filtrate was then maintained at 40℃ for an additional 270 min. The testing results show that the different reaction conversion with and without IRMOF-3[Mn] catalyst, which complex Mn ion by pivaldehyde (trimethylacetaldehyde). It demonstrated that the existing of IRMOF-3[Mn] could improve the reaction conversion.

The application of 1-Dibenzofuranylboronic Acid in electronic devices
Mar 25, 2020