Properties and applications of Tacrolimus 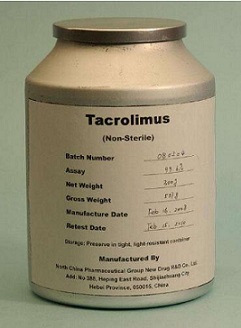 Tacrolimus, a hydrophobic macrocyclic lactone, was first isolated in 1985 from the fermentation broth of Streptomyces tsukubaensis, a soil microorganism found in the Tsukuba region of northern Japan. It has been in clinical use in Japan since 1993 and was approved in the US in April 1994 for the prophylaxis of organ rejection after liver transplantation. Tacrolimus is also effective in preventing graft rejection in heart, small bowel, and kidney transplants. Now tacrolimus has been used clinically in the treatment of rejection following transplantation with a variety of organs and also as an immunosuppressive agent in the therapy of autoimmune disorders[1].

Tacrolimus is highly lipophilic and undergoes extensive tissue distribution. In blood, tacrolimus is sequestered by erythrocytes, with the result that plasma drug concentrations are approximately 10 to 30 times lower than whole blood concentrations. Tacrolimus is metabolized extensively in the liver, primarily by demethylation and hydroxylation, with less than 1 % of the parent compound being excreted unaltered in the bile and urine. Hepatic dysfunction is associated with elevated plasma concentrations of tacrolimus, prolongation of the plasma elimination half-life, and reduced plasma clearance. 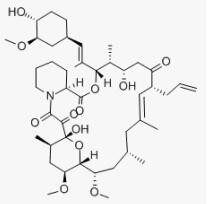