Dansyl chloride or 5-Dimethylaminonaphthalene-1-sulfonyl chloride (CAS 605-65-2) is a fluorogenic reagent used for protein, N-terminal amino acid and peptide detection by reverse phase high performance liquid chromatography (HPLC). It is also used to determine the degree of labeling in chymotrypsin and ovalbumin. It acts as a precursor for the synthesis of other derivatives like dansyl amide [1]. Dansyl chloride is non-fluorescent until it reacts with amines. The resulting Dansyl amides have environmentally sensitive fluorescence quantum yields and emission maxima along with large Stokes shifts. This environment-sensitive fluorescence property has made Dansyl chloride an important tool for biophysical studies. It is particularly useful for preparing fluorescent drug or ligand analogs that are expected to bind to hydrophobic sites in proteins or membranes or other biological receptors. Dansyl protein conjugates have fluorescence lifetimes of 10-20 nanoseconds [2]. 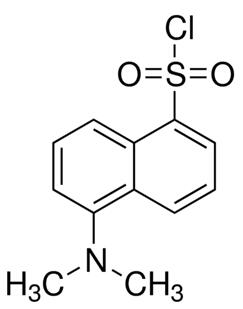 As we know, Dansyl chloride is a reagent that reacts with primary amino groups in bothaliphatic and aromatic amines to produce stable blue- or blue-green–fluorescent sulfonamide adducts. It can also be made to react withsecondary amines. Dansyl chloride is widely used to modify amino acids; specifically, protein sequencing and amino acid analysis. Dansyl chloride may also be denoted DNSC. Likewise, a similar derivative, dansyl amide is known as DNSA. In addition, these protein-DNSC conjugates are sensitive to theirimmediate environment. This, in combination with their ability to acceptenergy (as in fluorescence resonance energy transfer) from the aminoacid tryptophan, allows this labeling technique to be used in investigating protein folding and dynamics.

The fluorescence of these sulfonamide adducts can be enhanced by adding alpha-cyclodextrin. Dansyl chloride is unstable in dimethyl sulfoxide, which should never be used to prepare solutions of the reagent. The extinction coefficient of dansyl derivatives are important formeasuring their concentration in solution. Dansyl chloride is one of thesimplest sulfonamide derivatives, so it commonly serves as a startingreagent for the production of other derivatives. Exotic derivatives mayhave very different extinction coefficients, but others, such as dansylamide, are similar to dansyl chloride in absorption and fluorescencecharacteristics. But even for dansyl chloride, there are a variety ofextinction coefficient values that have been reported. Some of the valuesare used to estimate the extent of success in attempts to conjugate thedye to a protein. Other values may be used to determine a preciseconcentration of a stock solution [3].

How much do you know about Levomefolate calcium?
Mar 25, 2020