Antimony - Medicinal Use Discovery and History

Red antimony trisulfide occurs naturally in stibnite, a mineral mentioned by Dioscorides and found in Hungary, France, Cornwall and Borneo. It appears in Arabic writings about eye diseases as well as in the Liber de Gradibus compiled in the eleventh century by Constantinus Africanus, who introduced the term ‘antimony’. The medicinal use of stibnite was, however, limited by its insolubility in water. Paracelsus was largely responsible for the popularity of antimony trisulfide and other antimonial preparations from the sixteenth century onwards. He distilled the trisulfide from stibnite and recommended ointments and balms containing it for treatment of wounds, ulcers, leprosy and other skin ailments. Shortly before his death, the metallurgical text by Vannoccio Biringuccio, entitled De la Pirotechnia, mentioned that a metal could also be formed from stibnite, although instructions for making this did not appear until 1571 in De Secretis Antimonii by Alexander von Suchten. When finely divided, metallic antimony formed a slightly water-soluble oxide that could be taken by mouth as a purgative. It caused a number of deaths in Paris, provoking the Faculty of Paris in 1566 to persuade the Parlement to ban its use. The University of Heidelberg did likewise, but those who sought to evade these bans drank from cups of metallic antimony which, if filled with acidic white wine for 24 hours, could deliver a fatal dose of antimony tartrate.

Antimony potassium tartrate was described by the German physician Adrian von Mynsicht in his Medico-Chemical Treatise and Arsenal of 1631. It became known as tartar emetic since a dose of 65 mg produced violent emesis and sweating. It was prescribed for fever on the basis that humoral imbalances were being corrected, reflecting the views of those who accepted chemical remedies without abandoning humoral medicine. It was used for this purpose until the introduction of modern antipyretic drugs in the late nineteenth century. A particularly successful product introduced in the mid-eighteenth century was known as ‘Dr James’ Fever Powders’, which combined the alleged virtues of antimony with those of mercury and remained on the market for over one hundred years. Another popular use of tartar emetic was as an external application when mixed with lard or in a plaster. This produced a burning sensation, followed by the appearance of a characteristic pustular eruption. It was thought to be beneficial in the treatment of severe ulcers. There was also a wider application, as can be seen from a letter written by Jenner (of vaccination fame) in 1822 which advocated the inunction of the shaven head with a tartar emetic ointment as a cure for insanity.

During the nineteenth century the popularity of antimonial drugs declined, but a reversal of this occurred at the start of the twentieth century after Alphonse Laveran demonstrated the ability of Fowler’s Solution (dilute arsenic trioxide) to kill trypanosomes in experimentally infected mice, indicating a possible role in the treatment of sleeping sickness. His colleagues at the Pasteur Institute, Mesnil and Brimont, went on to demonstrate the temporary disappearance of trypanosomes from the blood of experimentally infected mice. They proceeded to show that when cattle infected with trypanosomiasis were injected intravenously with antimony potassium tartrate, a cure could be achieved if large doses were given. Patrick Manson, the Scottish physician who demonstrated that some tropical diseases were transmitted by insects, then cured several patients with repeated injections of antimony potassium tartrate. There were severe side effects which were later attributed to the large quantity of saline administered with the intravenous injections. The need for prolonged treatment was confirmed when Jean Ke´randel, a French physician in the Congo who had become infected, started to treat himself. The consensus that emerged was that antimony potassium tartrate was too toxic to be administered to patients for the prolonged schedule of injections that would be required. The subsequent development of safer, less irritant organic antimonial drugs also failed to provide anything to rival suramin or the organic arsenicals.

After detecting a hitherto unrecognised protozoon, Leishmania braziliensis, in patients afflicted with a skin disease known locally as espundia, a young Brazilian physician, Gaspar de Oliveira Vianna, tested antimony potassium tartrate. In 1912, he reported that the injections cured the disease. Antimony potassium tartrate remained the standard treatment for cutaneous leishmaniasis until superseded by sodium stibogluconate, another antimonial, but leishmaniasis remains one of the most widespread of all communicable diseases in the world. A common form of it is kala-azar, a visceral disease that affects millions of children in Africa, Central and South America, China, India, the Middle East and parts of Russia. Without treatment the mortality rate is in the order of 90%. In 1915, di Cristina and Caronia successfully treated children in Sicily by injecting antimony potassium tartrate.61 The intravenous injections caused irritancy and, on occasion, sudden death, but they have led to a reduction of the mortality rate from kala-azar to around 10%, saving the lives of millions of children. Few other drugs have ever made such impact.

In 1915, James McDonagh found schistosomiasis (bilharzia) also responded to antimony potassium tartrate therapy. His findings were overlooked until three years later when John Christorpherson in the Civil Hospital at Khartoum noticed that tartar emetic acted against schistosomiasis in a patient being treated for leishmaniasis. McDonagh then published a paper in the Lancet shortly after that by Christorpherson which had been published in the same journal. Treatment with antimony potassium tartrate on a large scale began in Egypt in 1919 and antimonials became the standard therapy for schistosomiasis until the introduction of praziquantel. Schistosomiasis still affects the lives of 200 million people, mainly in Egypt. The parasite is transmitted by fresh-water snails. 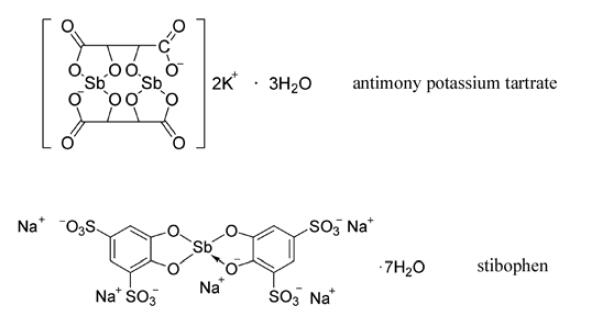 Antimony potassium tartrate had major drawbacks, especially the need for prolonged treatment and its serious side effects. This drove forward research into the development of safer, less-irritant analogues by Hans Schmidt at the von Heyden Chemical Works in Radebeul, Germany, for testing at the University of Freiberg by Paul Uhlenhuth who had previously found sodium 4-aminobenzenestibonate, the antimony analogue of Atoxyl1, to be active in vitro but chemically unstable. The first successful product of this collaboration between Uhlenhuth and Schmidt was stibenyl, the antimonial equivalent of Ehrlich’s arsacetin. Stibenyl was introduced into the clinic in 1915 as it appeared to be less toxic than antimony potassium tartrate. It removed trypanosomes from the blood of infected patients for several months, but relapses invariably occurred. However, it was successfully used in treating kala-azar in children until superseded by stibophen, which had been developed by Uhlenhuth and Schmidt because they believed that the severe irritancy of antimony potassium tartrate was due to breakdown of the complex to release antimony oxide. They had set about preparing stronger complexes, resulting in the marketing in 1924 of the potassium salt of stibophen. Stibophen was re-formulated five years later as the less irritant sodium salt. It was astutely marketed under the brand name of Fouadin1 to impress King Fouad of Egypt, a country where schistosomiasis was, and remains, a major health problem causing debility in millions of people. Schmidt also synthesised sodium stibogluconate, a pentavalent antimonial in which gluconic acid replaced tartaric acid, which was evaluated in the IG Farben laboratories at Elberfeld in 1937. It is now considered to be the drug of choice in all types of leishmaniasis, being rivalled by only meglumine antimonate, introduced by Rhoˆ ne-Poulenc in 1946. This is a pentavalent antimonial in which tartaric acid has been replaced by an aminosugar derived from glucose. It is one of the most effective drugs currently available for the treatment of kala-azar and other forms of leishmaniasis.