Lacosamide is a functionalized amino acid that has activity in the maximal electroshock seizure test, and is indicated for the adjunctive treatment of partial-onset seizures and diabetic neuropathic pain. Recent studies indicate that Lacosamide only affects those neurons which are depolarized or active for long periods of time, typical of neurons at the focus of an epileptic seizure, as opposed to other antiepileptic drugs such as carbamazepine or lamotrigine which slow the recovery from inactivation and reduce the ability of neurons to fire action potentials. 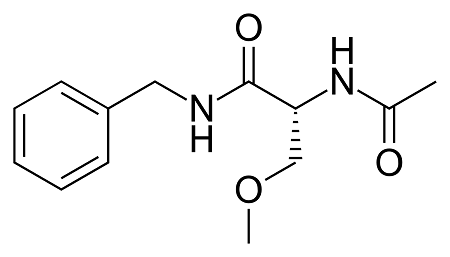 Lacosamide therapy is correlated with a decrease in seizure frequency. It should be noted that in group analyses, dosages above 400 mg/day do not appear to result in additional benefit.

It is proposed that lacosamide's inhibition of sodium channels is responsible for analgesia. Lacosamide may be selective for inhibiting depolarized neurons rather than neurons with normal resting potentials. Pain and nociceptor hyperexcitability are associated with neural membrane depolarization. Lacosamide binds to collapsin response mediator protein-2 (CRMP-2), a phosphoprotein which is expressed primarily in the nervous system and is involved in neuronal differentiation and control of axonal outgrowth. The role CRMP-2 of binding in seizure control is hasn't been elucidated.

Store lacosamide at room temperature (below 86oF, 30oC).

Keep them away from light and moisture.

Keep all medicines out of reach of children.

The oral solution should be used within 7 weeks of opening the bottle. Any unused solution of lacosamide should be thrown out after this time.