What is Didecyl dimethyl ammonium chloride?

Didecyl dimethyl ammonium chloride is a clear, yellow liquid, yellowish powder or colorless crystals. It has a mushroom-like odor. It is moderately soluble in water. Didecyldimethylammonium chloride is a quaternary ammonium compound used as detergent/disinfectant in hospitals, as algicide in swimming pools, and as a fungicide and against termites in wood. This compound caused contact dermatitis in a hospital employee, also sensitive to glyoxal and bis-(aminopropyl)- laurylamine. 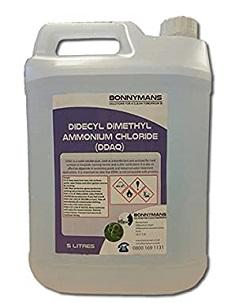 In agriculture, Didecyldimethylammonium chloride is used as the Biocide, Fungicide, Bactericide, Herbicide, Algaecide, Algaecide, Bacteriocide, Fungistat, Microbiocide, Microbiostat disinfectant, Viricide, Tuberculocide, Molluscide, Insecticide, used as a general purpose disinfectant on hard, nonporous surfaces( as a sanitizer); used as a mildew preventative, wood preservative, and to kill algae, phytopathogenic fungi, phytopathogenic bacteria. It is an active ingredient in a large number of disinfectant products registered with USEPA and labeled with a claim to inactivate “avian influenza A” viruses on hard surfaces.

Didecyldimethylammonium chloride is used to disinfectant egg shells, milking equipment and udders, agricultural tools and vehicles. It is used as a sanitizer for swimming pools, and decorative ponds and fountains. It is a wood preservative. Didecyl dimethyl ammonium chloride is registered for these antimicrobial uses by the U.S. EPA Office of Pesticide Programs.

In mice this disinfectant was found to cause infertility and birth defects when combined with Alkyl (60% C14, 25% C12, 15% C16) dimethyl benzyl ammonium chloride (ADBAC). These studies contradict the older toxicology data set on quaternary ammonia compounds which was reviewed by the U.S. Environmental Protection Agency (U.S. EPA) and the EU Commission.

Didecyldimethylammonium chloride (DDAC) is an antiseptic/disinfectant that is used in many biocidal applications. This quaternary ammonium compound is used as a detergent-disinfectant in hospitals, as an algaecide in swimming pools, as a fungicide, and against termites in wood. We observed severe contact dermatitis in a slaughterhouse worker using a liquid soap containing this product (personal observation). Immediate-type manifestations like urticaria and dyspnoea have been reported.

What is Lithium bis(trimethylsilyl)amide?
Apr 8, 2021

What is Trifluoromethanesulfonic acid?
Apr 12, 2021