Dimethyl ether(DME), also known as methyl ether and methoxymethane, is the simplest fatty ether. It is a derivative of the dehydration condensation of two molecules of methanol. It is colorless, non-toxic, gas or compressed liquid with slight ether aroma at room temperature. 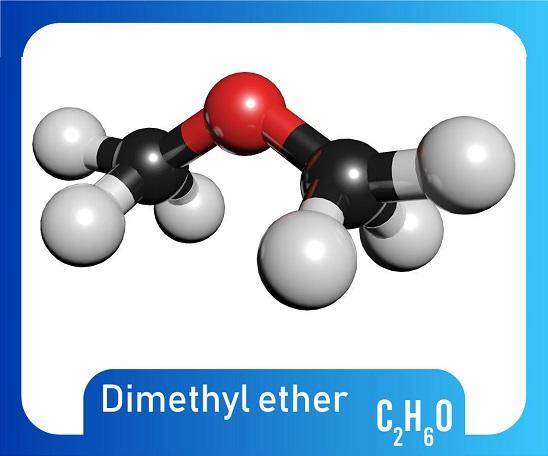 Dimethyl ether has excellent combustion characteristics, high cetane number, low pollution, no damage to the atmospheric ozone layer, and easy degradation in the troposphere. It can be widely used as automobile fuel.

As a substitute for Freon, it is also used in refrigerants.

3. Inhalation has an inhibitory effect on the central nervous system. It can cause anesthesia and suffocation after inhalation, and the anesthetic effect is weaker than that of ether. Irritating to skin. Mixing with air can form an explosive mixture, and the allowable concentration in the air is 400mg/kg.

Higher concentrations of DME act on the central nervous system (CNS) to produce narcosis. The effects are rapidly reversible which is consistent with the very rapid bioelimination of the molecule. DME has, in the past, been considered for use as a human anesthetic. It should be noted that this chemical can produce cardiac sensitization similar to the effects of epinephrine.

DME released to the atmosphere would be expected to exist almost entirely in the vapor phase since the vapor pressure is 4450 mmHg at 25 ℃. It is susceptible to photooxidation via vapor phase reaction with photochemically produced hydroxyl radicals. An atmospheric half-life of 5.4 days has been calculated. It will also exhibit very highmobility in soil and, therefore, itmay leach to groundwater. If DME is released to water, it will not be expected either to significantly absorb to sediment or suspended particulate matter, bioconcentrate in aquatic organisms, or directly photolyze. No data concerning the biodegradation of DME in environmental media were located but many ethers are known to be resistant to biodegradation. DME would not be expected to bioconcentrate in aquatic organisms.