The uses of Dolomite

Dolomite is rarely found in modern sedimentary environments, but dolostones are very common in the rock record. They can be geographically extensive and hundreds to thousands of feet thick. Most rocks that are rich in dolomite were originally deposited as calcium carbonate muds that were postdepositionally altered by magnesium-rich pore water to form dolomite. 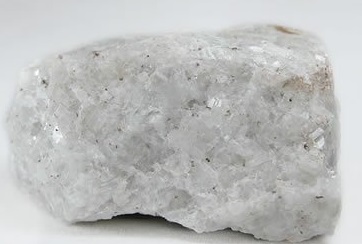 Dolomite has three directions of perfect cleavage. This may not be evident when the dolomite is fine-grained. However, when it is coarsely crystalline the cleavage angles can easily be observed with a hand lens. Dolomite has a Mohs hardness of 3 1/2 to 4 and is sometimes found in rhombohedral crystals with curved faces. Dolomite produces a very weak reaction to cold, dilute hydrochloric acid; however, if the acid is warm or if the dolomite is powdered, a much stronger acid reaction will be observed. (Powdered dolomite can easily be produced by scratching it on a streak plate.)

Dolomite is very similar to the mineral calcite. Calcite is composed of calcium carbonate (CaCO3), while dolomite is a calcium magnesium carbonate (CaMg(CO3)2). These two minerals are one of the most common pairs to present a mineral identification challenge in the field or classroom.

Dolomite as a mineral has very few uses. However, dolostone has an enormous number of uses because it occurs in deposits that are large enough to mine.

The most common use for dolostone is in the construction industry. It is crushed and sized for use as a road base material, an aggregate in concrete and asphalt, railroad ballast, rip-rap, or fill. It is also calcined in the production of cement and cut into blocks of specific size known as "dimension stone."

Dolomite's reaction with acid also makes it useful. It is used for acid neutralization in the chemical industry, in stream restoration projects, and as a soil conditioner.

Dolomite is used as a source of magnesia (MgO), a feed additive for livestock, a sintering agent and flux in metal processing, and as an ingredient in the production of glass, bricks, and ceramics.

Dolomite serves as the host rock for many lead, zinc, and copper deposits. These deposits form when hot, acidic hydrothermal solutions move upward from depth through a fracture system that encounters a dolomitic rock unit. These solutions react with the dolomite, which causes a drop in pH that triggers the precipitation of metals from solution.

Dolomite also serves as an oil and gas reservoir rock. During the conversion of calcite to dolomite, a volume reduction occurs. This can produce pore spaces in the rock that can be filled with oil or natural gas that migrate in as they are released from other rock units. This makes the dolomite a reservoir rock and a target of oil and gas drilling.