Acetyl tetrapeptide-5 is known as eye peptide and eye silk peptide. The molecular weight of acetyltetrapeptide-5 is 492.5 and the amino acid sequence is Ac- βAla-His-Ser-His-OH, the molecular formula is C20H28N8O7. Staying up late for a long time will form continuous pressure around the eyes, resulting in insufficient blood supply to the eye skin. The influence of saccharification in the body and the increase of ocular vascular osmotic pressure will make the eye skin form dark circles and edema. Some studies have proved that acetyltetrapeptide-5 can reduce edema by changing the microcirculation of regional skin and the osmotic pressure of liquid, so as to effectively eliminate edema, eye bags and dark circles[1].

Staying up late for a long time forms too much pressure on the eyes, resulting in excessive fatigue of the eyes, slowing down the lymphatic circulation, causing insufficient blood supply, and the permeability of capillaries increases, allowing a large amount of protein to leak into the tissue fluid, reducing the osmotic pressure of intravascular liquid and increasing the osmotic pressure of tissue fluid colloid, resulting in eye swelling. At this time, the human body will secrete renin and angiotensinogen (involved in the regulation of blood pressure and body fluid) to catalyze the synthesis of angiotensin I (inactive), and synthesize angiotensin II (active) under the action of pulmonary angiotensin converting enzyme (ACE), which is used to constrict blood vessels to improve blood pressure and alleviate insufficient blood supply. Acetyltetrapeptide-5 can be used as an inhibitor of angiotensin converting enzyme (ACE), which can inhibit the synthesis of angiotensin II, so as to relieve eye pressure, reduce the permeability of capillaries, reduce the penetration of liquid in blood into periocular tissues, and eliminate edema.

Lipotec, the original manufacturer of acetyl tetrapeptide-5, proved that it can effectively reduce the water seepage of pouch blood vessels in an experiment to evaluate the effect of acetyl tetrapeptide-5 on vascular permeability. The researchers placed 1.0 on different 24 well tissue culture plates μ M symmetrical transparent polyethylene permeable membrane, endothelial cells were inoculated on the carrier of collagen envelope for culture, and 1, 0.1 and 0.01mg/ml acetyltetrapeptide-5 and interleukin-1 were added respectively β (100 mg / ml) and other control agents. 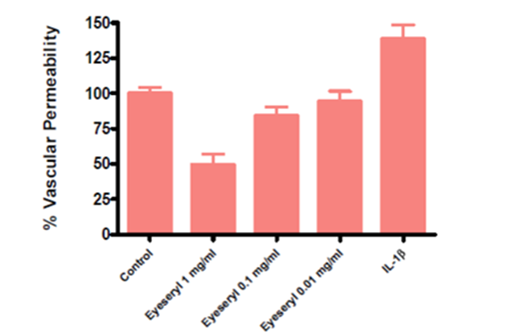 In vivo studies have shown that acetyltetrapeptide-5 can improve puffy bags under the eyes. Lipotec, the original manufacturer of acetyltetrapeptide-5, conducted an in vivo test of acetyltetrapeptide-5 on 20 female volunteers aged 18 ~ 65 to evaluate its efficacy. The subjects received two times daily cream containing 0.01% acetylated peptide four -5 for 60 days, and photographed at zeroth, fifteenth, thirtieth, 45 and 60 days respectively. The results showed that 70% of the subjects' eye bags improved on day 15, the area of edema decreased significantly, and 95% of the volunteers improved at the end of the study (day 60). In addition, in another experiment to evaluate the effect of acetyl four peptide -5 on the elimination of pouch, 17 34-54 year old subjects were given two times a day for 28 consecutive days, using cream containing 0.001% acetyl four peptide -5 solution, and the pouch volume was measured by fringe projection technique. The results showed that after 14 days, 63% of the volunteers reduced pouch; After 28 days, 70% of the volunteers reduced their bags under the eyes, and the average bag volume decreased by nearly 3% over 15 days.

The properties and stability of butylamine
Apr 20, 2022