An Efficient Preparation for 2-Cyano-4'-methylbiphenyl

2-Cyano-4'-methylbiphenyl (o-tolylbenzonitrile, OTBN) is a key intermediate for the synthesis of anti-hypertensive drugs1 . Some methods have been reported for the preparation of o-tolylbenzonitrile. As described in the literature, o-tolylbenzonitrile could be prepared by reacting o-bromobenzonitrile with p-tolylmagnesium bromide in presence of Pd2-5, Ni6,7, Mn8,9 , etc. transition metal catalysts in a moderate to good yield. Unfortunately, some rather expensive iodo- and bromo-substituted arenes are usually chosen for improve reactivity whereas aryl fluorides are both costly and unreactive. Thereby there arise economical disadvantages in the processes. Moreover p-chlorotoluene should be certainly the most attractive aryl halides for synthetic applications toward an industrial manufacture because of inexpensive and readily available in bulk quantities. The main demerit here is the exceedingly high stability of the aromatic carbon-chlorine bone whose inertness remains the major drawback on the way to wide utilization of p-chlorotoluene10. Besides tetrahydrofuran (THF) was usually used for the solvent in reactions in order to get 80 % above of product yield11 compared with the low yield in toluene12,13. However, THF should be carefully treated before used and its reuse in process appear rather difficult to industrial application.

In view of the problems in the arts mentioned above, an object of the present process is to provide a method for economically, efficiently, simply and industrially preparing o-tolylbenzonitrile. We here report that the compound can be efficiently synthesized by the Mn(II)- or Ni(II)-catalyzed cross-coupling of o-chlorobenzonitrile with p-tolylmagnesium chloride via p-chlorotoluene in the mixed solvents involving.

THF and toluene. Thus, this novel process for biaryl synthesis not only overcomes the substrate limitations described above, but also allows for the industrial preparation of a wide range of the choice of recycle mixed solvents.

All of the starting materials were chemical purity grade or above. GC (Shimadzu GC-2014C equipped with FID detector) and HPLC (Shimadzu LC-10Avp Plus) were utilized to determine compositions of products and conversions using n-dodecane as internal standard.

A precursor Grignard reagent used for o-tolylbenzonitrile was prepared by using p-chlorotoluene as substrate. An oven-dried three-necked round-bottomed flask equipped with a 100 mL dropping funnel and a condenser was charged with a magnetic stir bar, magnesium turnings (0.044 mol, 1.05 g) and a catalytic amounts of I2. The flask was evacuated and backfilled with N2 to repeated three times. Slowing stirring and heating was started to I2 steam full of the flask, THF (5 mL) and p-chlorotoluene (0.0084 mol, 1.07 g) were added to the flask. Then the mixed solution toluene (20 mL) and THF (15 mL) containing p-chlorotoluene (0.0336 mol, 4.27 g) was added dropwise from a funnel. The solution was refluxed for the specific time until magnesium turnings disappeared. GC yield of 94.8 % ptolylmagnesium chloride intermediate was obtained based on internal standard analysis.

Followed by o-tolylbenzonitrile preparation from the following representative procedure, i.e., to a same cleaned three-necked round-bottomed flask with a magnetic stir bar was charged o-chlorobenzonitrile (0.042 mol, 5.78 g), manganese chloride (0.0032 mol, 0.40 g), THF (15 mL) and toluene (15 mL) to the flask. The reaction mixture was stirring for 0.5 h at room temperature. Then the solution formed was added dropwise to above prepared p-tolylmagnesium chloride intermediate at -5 ºC with stirring for 1 h and the stirring was maintained at -5 ºC for 3 h. The reaction was ceased by addition of dilute hydrochloric acid. The combined organic layers were washed three times by a saturated solution of sodium chloride then dried by anhydrous magnesium sulfate. The resulting organic solution was concentrated by rotary evaporation and the crude product was purified by distillation and recrystallization with petroleum ether to afford the desired product. HPLC yield of 70 % above o-tolylbenzonitrile was obtained based on internal standard analysis.

In various reaction conditions o-tolylbenzonitrile was selectively prepared accompanying with defined amounts of other constitutions (Scheme-I). Some results were shown in Table-1. 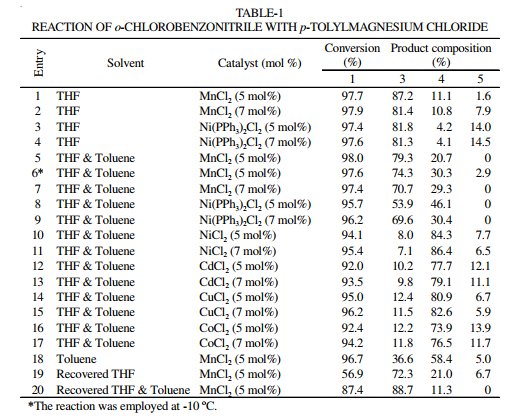 Catalysts affect the synthesis in the mixed solvents system. In the presence of MnCl2 (5 mol %) in THF, reaction o-chlorobenzonitrile with p-tolylmagnesium chloride at -5 ºC resulted in formation of the desired compound, o-tolylbenzonitrile,in 87.2 % yield by HPLC (entry 1 in Table-1) of 97.7% substrate conversion accompanied by minor amounts of two homo-coupled byproduct, 4,4'-dimethylbiphenyl (4, 11.1 %) and 2,2'-dicyanobiphenyl (5, 1.6 %). No other significant byproducts were observed by HPLC analysis. It should be noted that, with the increase of MnCl2 quantity the yield of 2-cayano-4'-methylbiphenyl was slight loss in Vol. 22, No. 8 (2010) An Efficient Preparation for 2-Cyano-4'-methylbiphenyl 6343 79.4 % at the expense of 2,2'-dicyanobiphenyl as byproducts (entry 2). Ni(PPh3)2Cl2 derived from NiCl2·6H2O and triarylphosphine in ethanol at 70-80 ºC was also employed to the reaction. A significant yield of 2-cayno-4'-methylbiphenyl of 81.8 % was also obtained when using a catalytic amount of Ni(PPh3)2Cl2 (5 mol %). Similarly the results weren't influenced obviously because of a increase of Ni(PPh3)2Cl2 amount.

Although toluene is usually used solvent in organic synthesis, for the coupling reaction the yield in individual toluene was obviously inferior to that in THF (entry 18). It was noted that the combined utilization of toluene and THF could greatly improve the reaction up to a reasonable yield. The mixed solvent system is rather favoured to industrial application of the reaction, since their recycle based on a simple distillation didn't change any reaction properties (entry 20) and no 2,2'- dicyanobiphenyl was detected. Moreover regenerated THF was not of the behaviour even if a carefully regeneration, i.e., a poor yield to aimed compound was observed.

Some catalysts were turned to the chloride of Cd, Co, Cu metals (entry 12-17). The results were influenced drastically. The yield of OTBN was almost reduced to 13 % to "byproduct" position. 4,4'-dimethylbiphenyl became the unexpected main product of a good selectivity in a 86.4% of high yield (entry11).

Therefore, a high selectivity turning to the desired product in the mixed solvents
of toluene and THF can be achieved and excellent recycle of the solvents can be
easily conducted in industrial preparation process.

7-Azaindole: A Versatile Scaffold for Developing Kinase Inhibitors
Sep 22, 2020
What is Tosyl chloride?
Sep 17, 2020
What is OCTADECENE?Uses,Purification method
Sep 7, 2020