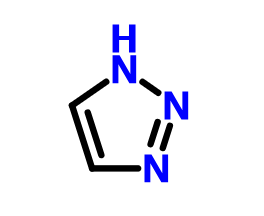 1,2,3-Triazole is one of a pair of isomeric chemical compounds with molecular formula C2H3N3, called triazoles, which have a five-membered ring of two carbon atoms and three nitrogen atoms. 1,2,3-Triazole is a basic aromatic heterocycle.
Substituted 1,2,3-triazoles can be produced using the azide alkyne Huisgen cycloaddition in which an azide and an alkyne undergo a 1,3-dipolar cycloaddition reaction.
It is a surprisingly stable structure compared to other organic compounds with three adjacent nitrogen atoms. However, flash vacuum pyrolysis at 500 °C leads to loss of molecular nitrogen (N2) to produce aziridine. Certain triazoles are relatively easy to cleave due to so-called ring-chain tautomerism. One manifestation is found in the Dimroth rearrangement.
1,2,3-Triazole finds use in research as a building block for more complex chemical compounds, including pharmaceutical drugs such as tazobactam.

储存条件：
Store in a cool, dry place. Store in a tightly closed container.