Description
ABT-199, also known as venetoclax, is a small, oral chemical molecule used for the treatment of chronic lymphocytic leukemia (CLL) associated with a specific chromosomal abnormality. As a second line treatment drug of CLL, ABT-199 take effects through acting as a BH3-mimetic and inhibitor of Bcl-2 (the anti-apoptotic B-cell lymphoma-2protein), further inducing apoptosis of CLL cells but not platelets. It also has the potential for the treatment of ER-positive breast cancer.
BCL-2 inhibitor

Venetoclax is a first-in-class, oral, selective BCL-2 inhibitor (BH3-only mimetic). The drug is approved in numerous countries, including those of the EU and in the USA, for the treatment of adults with relapsed or refractory (RR) CLL. The drug arose from research by Abbott Laboratories (now AbbVie) during a collaboration with Genentech and is being codeveloped by AbbVie and Genentech/Roche primarily.

Venetoclax has high affinity for BCL-2, binding to the protein with an affinity more than three orders of magnitude greater than to BCL-XL or BCL-W in vitro. By binding to BCL-2, the drug displaces BCL-2-bound proapoptotic proteins (such as BIM), resulting in the permeabilization of mitochondrial outer membranes, activation of caspases, and restoration of cancer cell apoptosis, with this process requiring the apoptosis regulators BAX or BAK.


Clinical evaluation
As a specific Bcl-2 inhibitor of Bcl-2, ABT-199 was approved by FDA to treat CLL in 2015. ABT-199 was designed to avoid the nonselective binding of ABT-263 with Bcl-XL, which could induce the adverse effect of thrombocytopenia. The X-ray crystal structure of a Bcl-2 dimer in complex with ABT-263 and that with a modified ABT-263 lacking the thiophenyl moiety elucidated an alternative bind site in the hotspot p4-binding pocket that could be utilized for selective binding of Bcl-2. This led to the development of ABT-199 that tightly binds to Bcl-2 but not Bcl-XL. Consistent with its lower affinity to Bcl-XL, ABT-199 spared human platelets both in vivo and in vitro. In clinical trials, ABT-199 exhibited immediate antileukemic activity after a single dose in three refractory CLL patients with only minor changes in platelet counts. ABT-199 as a single agent showed promising clinical response in many malignancies, such as diffused large B-cell lymphoma, follicular lymphoma, CLL, acute myeloblastic leukemia (AML), and multiple myeloma. Studies also showed that ABT-199 had a significant sensitizing effect in combination with other antitumor drugs, such as rituximab, obinutuzumab, in CLL and AML patients. However, ABT-199 did show adverse effects, especially tumor lysis syndrome (TLS). Furthermore, neutropenia or infections have also been observed in patients using ABT-199.
Chapter 10 - Bcl-2 Inhibitors as Sensitizing Agents for Cancer Chemotherapy
Cytotoxic Activity

Venetoclax displayed cytotoxic activity in various tumour samples/cell lines, including some derived from CLLs, various other NHL subtypes, acute lymphoblastic leukaemias (ALLs), AMLs, chronic myeloid leukaemias (CMLs) and MMs. Notably, the sensitivity of venetoclax correlated with higher BCL-2 expression, with a BCL-2 high status [i.e. BCL-2 gains, BCL-2 amplifications, or the t translocation, which is a notable cause of deregulated BCL-2 expression] and higher BCL-2/MCL-1 ratios being potentially predictive of sensitivity to the drug.

Definition
ChEBI: A member of the class of pyrrolopyridines that is a potent inhibitor of the antiapoptotic protein B-cell lymphoma 2. It is used for treamtment of chronic lymphocytic leukemia with 17p deletion.
Chemical Synthesis
The manufacturing route to venetoclax takes place by coupling of three key structural subunits: azaindole 162, sulfonamide 165, and piperazine 172. The first of these subunits was generated in two steps from commercially available 4-bromo-2-fluoro-1-iodo-benzene (159). Grignard formation of iodide 159 (i-PrMgCl) followed by quenching with Boc2O provided the desired tert-butyl ester 160 without the need for chromatographic purification. Aromatic substitution of crude 160 with azaindole 161 provided access to 162 in 86% yield after recrystallization from EtOAc/heptane. Sulfonamide 165 was formed in 91% yield and 99.9% purity via aromatic substitution of commercially available 163 with amine 164 at 80 °C (DIPEA, MeCN).

Synthesis of the third venetoclax subunit, piperazine amine hydrochloride salt 172, began with commercial cyclohexanone 166. Vilsmeier-Haack formylation of the sterically more accessible enol tautomer of 166 delivered vinyl chloride 167 in quantitative yield. Coupling of this chloride with commercial aryl boronate 168 gave rise to transient enal 169 in 87% assay yield, which was not isolated. Crude 169 was then carried into a reductive amination reaction with commercial N-Boc piperazine (170). Precipitation and recrystallization from acetonitrile ultimately furnished piperazinyl alkene 171 in 74% yield from 167. Finally, subunit 172 was obtained via Boc removal with concentrated HCl in IPA at 65 °C and subsequent filtration, conditions that provided a 95% yield of high purity intermediate 172 (>99.5%). 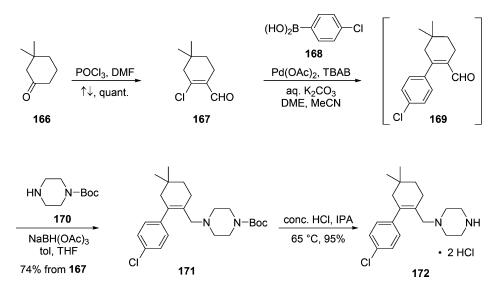 The final approach to venetoclax involved a palladiumcatalyzed coupling of amine 172 with aryl bromide 162, ester hydrolysis, and coupling of the resulting carboxylic acid with sulfonamide 165. In practice, Buchwald-Hartwig amination of 162 with 172 proceeded smoothly and relied upon workup with cysteine to enable cleansing of residual palladium from the reaction mixture. This reaction gave rise to advanced intermediate 173 in 89% yield after crystallization from cyclohexane. Treatment of 173 with t- BuOK/H2O/2-MeTHF at 55 °C provided the corresponding free acid, which was immediately activated with EDC/DMAP/ Et3N to promote coupling with sulfonamide 165 at room temperature. The final drug target could be accessed by crystallization from EtOAc and washing with 1:1 DCM/EtOAc, yielding venetoclax (XVIII) in free base form in 71% over the two final steps. This synthetic route was capable of fashioning the drug target in 52% overall yield based on the longest linear sequence (7 steps). 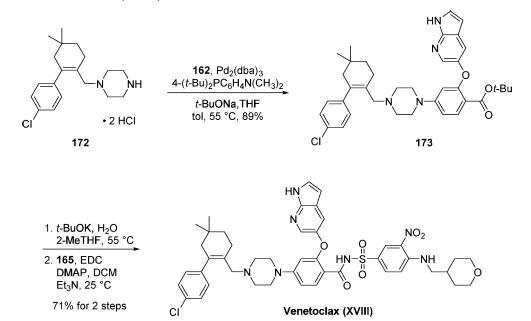