Phthalic anhydride is the organic compound with the formula C6H4(CO)2O. It is the anhydride of phthalic acid. This colourless solid is an important industrial chemical, especially for the large-scale production of plasticizers for plastics. 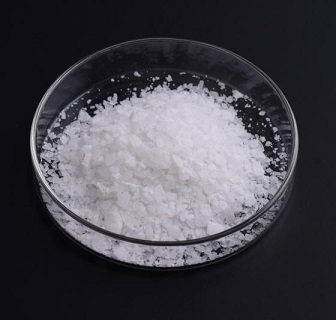 
Waste Disposal
Use a licensed professional waste disposal service to dispose of this material. Dissolve or mix the material with a combustible solvent and burn in a chemical incinerator equipped with an afterburner and scrubber. All federal, state, and local environmental regulations must be observed. Consult with environmental regulatory agencies for guidance on acceptable disposal practices. Generators of waste containing this contaminant (≥100 kg/mo) must conform with EPA regulations governing storage, transportation, treatment, and waste disposal.
Physical properties
Colorless to pale cream crystals with a characteristic, choking odor. Moisture sensitive. Odor threshold concentration is 53 ppb (quoted, Amoore and Hautala, 1983).
Synthesis Reference(s)
The Journal of Organic Chemistry, 25, p. 616, 1960 DOI: 10.1021/jo01074a035
Synthesis, p. 612, 1973
Tetrahedron Letters, 20, p. 2301, 1979 DOI: 10.1016/S0040-4039(01)93957-7
Pharmaceutical Applications
Phthalic anhydride reacted with cellulose acetate forms cellulose acetate phthalate (CAP), a common enteric coating excipient that has also been shown to have antiviral activity. Phthalic anhydride is a degradation product of CAP.
Chemical Synthesis
Phthalic anhydride is a precursor to a variety of reagents useful in organic synthesis. Important derivatives include phthalimide and its many derivatives. Chiral alcohols form half-esters (see above), and these derivatives are often resolvable because they form diastereomeric salts with chiral amines such as brucine. A related ring - opening reaction involves peroxides to give the useful peroxy acid:
C6H4(CO)2O + H2O2 → C6H4(CO3H)CO2H.
Environmental Fate
Chemical/Physical. Reacts with water to form o-phthalic acid (Kollig, 1993; Windholz et al., 1983). Based on an observed rate constant of 7.9 x 10-9/sec, the hydrolysis half-life is 88 sec (Hawkins, 1975).
Pyrolysis of phthalic anhydride in the presence of polyvinyl chloride at 600 °C for 10 min gave the following compounds: biphenyl, fluorene, benzophenone, 9-fluorenone, o-terphenyl, 9-phenylfluorene, and three unidentified compounds (Bove and Dalven, 1984).
Purification Methods
Distil the anhydride under reduced pressure. Purify it from the acid by extracting with hot CHCl3, filtering and evaporating. The residue is crystallised from CHCl3, CCl4 or *benzene, or sublimed. Fractionally crystallise it from its melt. Dry it under vacuum at 100o. [Saltiel J Am Chem Soc 108 2674 1986, Beilstein 17/11 V 253.]
Preparation of phthalate esters
As with other anhydrides, the alcoholysis reaction is the basis of the manufacture of phthalate esters, which are widely used (and controversial - see endocrine disruptor) plasticizers. In the 1980s, approximately 6.5×109 kg of these esters were produced annually, and the scale of production was increasing each year, all from phthalic anhydride. The process begins with the reaction of phthalic anhydride with alcohols, giving the monoesters:
C6H4(CO)2O + ROH → C6H4(CO2H)CO2R
The second esterification is more difficult and requires removal of water:
C6H4(CO2H)CO2R + ROHC6H4(CO2R)2 + H2O
The most important di ester is bis (2-ethyl hexyl) phthalate ("DEHP"), used in the manufacture of polyvinyl chloride.
Precursor to dyestuffs
Phthalic anhydride is widely used in industry for the production of certain dyes. A well-known application of this reactivity is the preparation of the anthroquinone dye quinizarin by reaction with parachloro phenol followed by hydrolysis of the chloride.
Toxicity evaluation
Phthalic anhydride modulates lipid mediator release and cytokine formation and has sensitizing effects on the respiratory tract. The local irritating effect particularly on the mucous membranes probably depends on the hydrolysis to phthalic acid.