The bilberry plant belongs to the large genus Vaccinium. It is a low-growing shrub native to northern Europe and also found in some parts of North America and Asia. The other close members of this plant are blueberry (Vaccinium corymbosum) and cranberry (V. macrocarpon). Bilberry is one of the richest sources of anthocyanins, the polyphenolic components which give bilberry its blue/black color and high antioxidant content. These anthocyanins are the major bioactive compounds responsible for many health benefits of this fruit. Bilberry is known to improve vision; it also lowers blood glucose and lipid levels and is an anti-inflammatory, antioxidant, and antimicrobial. This berry has been studied in prevention of inflammation, dyslipidemia, hyperglycemia, increased oxidative stress, cardiovascular disease (CVD), cancer, diabetes, dementia, and other age-related diseases (Chu et al. 2011). The anticancer property of bilberry anthocyanins has been studied and well documented. Various in vitro and animal studies have demonstrated that these anthocyanins have cancer-preventive and suppressive property, the mechanism for which is its antioxidant activity, and effects like antiproliferative, apoptotic, anti-angiogenic, and anti-inflammatory (Seeram 2009; Benzie and Wachtel-Galor 2010; Matsunaga et al. 2010). In a recent study on soft tissue changes in oral cavity by Swedish smokeless tobacco, bilberries and an extract from the common milk thistle were found to exert a significant inhibition of cell proliferation induced by tobacco in the experimental rat forestomach epithelium, indicating a potential protection with respect to soft tissue changes in the human oral cavity (Nilsson et al. 2016).


Streptomycin sulfate
Blueberry extract is a kind of dark purple or violet fine powder extracted from blueberry fruit with taste bitter. Its commodity is labeled according to the content of blueberry proanthocyanidins. The fruits, leaves, and also marcs of blueberry are rich in many bioactive substances such as anthocyanins, flavonoids, and polyphenols and polysaccharides which are all natural antioxidants which has a lot of benefits such as protecting vision from blindness; strengthening the brain blood vessels for the prevention of cerebral vascular disease, strengthening the myocardial blood vessels, strengthening the coronary artery, strengthening the renal blood vessels, preventing the rupture of glomerular capillary which leads to hematuria, urethritis and cystitis; strengthening veins for prevention of varicose veins, preventing and treating ulcer, preventing atherosclerosis, and prevention of thrombosis .
Plant sources
Blueberries, which belong to Ericaceae Vaccinium, are either perennial deciduous plants or evergreen shrubs with white or pink flowers. The fruit of blueberry is dark blue with fruit peel covered by a layer of white powder. It is a rare blue food. Blueberries are rich in many kinds of antioxidants which have many health effects such as antioxidant effects, can prevent cancer, relieve visual fatigue, and improve immunity. Blueberry, as a first-class health food, is taken as the third-generation fruit after apple and citrus fruit. It is also one of the five health foods humans.
[Distribution and cultivation] Cranberries originate from North America where the blue fruit cranberries are cultivated at the largest scope, commonly known as blueberries. The history of blueberry cultivation is relative short. The earliest domestication (1908) began in the United States. China had begun introduced and domesticate blueberry for cultivation since the 1980s. There are more than 130 species of cranberries which distributed mainly in the Northern Hemisphere from the Arctic to the tropical mountain areas. China has about 20 species which are widely distributed in the Northeast and Southwest Mountains. Blueberries can be divided into cultivated and wild species. In North America, the most commonly cultivated varieties are Northern highbush blueberry. Chile is the world's second largest exporter of blueberries, second only to the United States.
[Chemical composition] Blueberries are rich in many kinds of nutrients such as protein, fat, minerals, vitamins and a large number of biologically active substances including anthocyanins, flavonoids, polyphenols which can be processed into both nutrient-rich blueberries food and having health benefits. It is a kind of berry combined with nutrition and health effect. Blueberry have a variety kinds of flavonoids which are presented in high levels such as anthocyanidins, flavanols, proanthocyanin and quercetin, which are as the main active ingredients of the present genus of plants. The earliest studied flavonoid is anthocyanidins. Now we have found about 30 kinds of anthocyanins wherein 15 species are common 15. Their pigment substances include five glycosides: anthocyanins, delphinidin, mallow pigment (malvidin), peony flower hormone (peonidin), and petunia aglycone (also known as 3-methyl delphinidin, petunidin). There are three sugars: glucose, galactose and arabinose. These five glycosides and these three glycosyl group formed the main component of anthocyanins (anthocyanins).
[Indications] It can be used to soften blood vessels, eliminate eye fatigue, improve vision; retard brain aging; enhance heart function; anticancer; take therapeutic effects on capillaries immune diseases caused by diabetes. The anthocyanin of blueberry leaves anthocyanin has an important role in boosting the re-synthesis of pigment rhodopsin, thereby enhancing people's eyesight. In modern society, television, cars and computers are widely available. Work stress and life stress are also increasing so that there are more and more cases about eyestrain and eye disease. According to the recommendation of American nutritionists, taking blueberry leaf extract for 3 tablets per day can achieve the purpose of eye care. Anthocyanin is a natural anti-aging nutritional supplement. Studies have proved that it is the most effective anti-oxidant people have found ever. The antioxidant property of anthocyanin is fifty times higher than that of vitamin E, and a hundred times as strong as that of vitamin C. It has a one hundred percent of bioavailability to its body, and can get detected inside the blood twenty minutes after taking. It is effective in preventing many kinds of diseases which are related to free radicals including cancer, cardiovascular disease, atherosclerosis, aging, and diabetes. 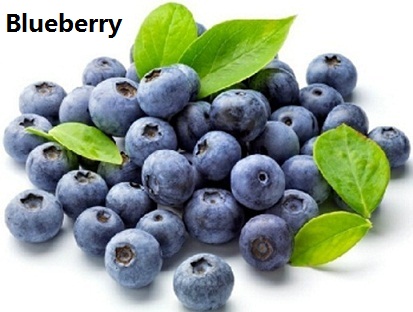 figure 1 : Blueberry
Efficacy and role
1. Antioxidant effect: Blueberry anthocyanin is a natural water-soluble free radical scavenger with its antioxidant activity 20 times as high as VC, and 50 times as high as VE. Blueberry anthocyanins have anti-lipid peroxidation capacity, reducing activity as well as a strong ability in scavenging superoxide anion radicals and hydroxyl radicals. Blueberry pomace flavonoid has a strong antioxidant capacity, especially for purified flavonoid with enhanced antioxidant capacity. The DPPH scavenging ability of the total phenols in blueberry pomace equals to 26.7mgVc/g (fresh weight). The Oxygen free radical scavenging capacity is 24.8mgVc/g (fresh weight). Blueberry polysaccharide has a strong scavenging ability on oxygen free radicals as well as DPPH.
2. antibacterial, anti-inflammatory and analgesic effect: blueberry extract can effectively inhibit the growth of harmful bacteria and promote the growth of beneficial bacteria. Study has showed that blueberry extract has a inhibitory effect on the growth of Escherichia coli, Staphylococcus aureus, Vibrio parahaemolyticus. Supplement of proper concentration of blueberry extract to the fermented milk can effectively promote the in vitro growth of beneficial bacteria Lactobacillus acidophilus. The study of Wang Jing et al has confirmed that blueberry anthocyanins can increase the pain threshold of mice, inhibit the ear edema as well as have a significant analgesic and anti-inflammatory effects.
3. Protect vision: it can be used to prevent blindness, glaucoma,cataracts, retinal hemorrhage, and improve myopia, treat macular degeneration, diabetic retinopathy, retinitis pigmentosa and night blindness and so on. In the high oxygen environment, retina is easily susceptible to oxidative damage upon long-term visible light. Blueberries contain a variety of biologically active ingredients with the role of protecting eyesight Mengxian Jun et al have shown that blueberry anthocyanins can make the retina structure which has suffered light damage before being well arranged with cells being arranged in good alignment; it can also effectively prevent the retinal outer nuclear layer from getting thin and the decrease of total protein content in retinal; it can also significantly increase the activity of SOD, GSH-Px of retinal cells while decrease MDA content. Blueberry anthocyanins have an obvious effect on protecting rat retinal injury.
4. Inhibition of tumors: The anti-cancer effect of blueberry anthocyanins has been demonstrated in a variety of cell lines system. Jinjun Hua has studied the in vitro inhibitory effect of blueberry extract on the proliferation of human colon cancer cell lines HCT116. The results showed that blueberry extract can cause the elevation of the expression level of the key apoptosis protein Caspase-3 inside HCT116 which significantly inhibited the expression of NF-kB protein, thus inducing the cell apoptosis of HCT116 tumor cell in vitro and further inhibiting its growth and proliferation.
5. Cerebrovascular: it can be used for strengthening cerebral blood vessels, preventing cerebral vascular disease, strengthening myocardial blood vessels, leading to strong coronary artery, strengthening the renal blood vessels, preventing the rupture of glomerular capillary which leads to hematuria, urethritis and cystitis; strengthening veins for prevention of varicose veins, preventing and treating ulcer, preventing atherosclerosis, and prevention of thrombosis .
6. Capillary: It can increase the flexibility of capillaries, promote the dilation of blood vessel as well as keep the flexibility, prevent the rupture of blood vessel rupture. Bilberry can not only strengthen the capillaries in the eye, of course, but also can strengthen the capillaries of body's other organs and tissues in order to prevent organ ministries vascular disease.
In addition, blueberry extract can also used for preventing cardiovascular disease, inhibiting obesity, alleviating diabetes, and preventing the occurrence of osteoporosis.
The above information is edited by the Chemicalbook of Dai Xiongfeng.

Uses
In jams and jellies; food flavoring. Extracts as astringent and capillary protectant in eyecare and skin products.