Potential Exposure
Sodium sulfate is used in the manufacture of glass; as a precipitating agent in the manufacture of silver emulsions; as an analytical reagent; in making ultramarine and paper pulp; in ceramic glazes and pharmaceuticals; as a food additive; and a filler in synthetic detergents.
First aid
If this chemical gets into the eyes, remove any contact lenses at once and irrigate immediately for at least 15 minutes, occasionally lifting upper and lower lids. Seek medical attention immediately. If this chemical contacts the skin, remove contaminated clothing and wash immediately with soap and water. Seek medical attention immediately. If this chemical has been inhaled, remove from exposure, begin rescue breathing (using universal precautions, including resuscitation mask) if breathing has stopped and CPR if heart action has stopped. Transfer promptly to a medical facility. When this chemical has been swallowed, get medical attention. Give large quantities of water and induce vomiting. Do not make an unconscious person vomit.
Shipping
UN2630 Selenates or Selenites, Hazard Class: 6.1; Labels: 6.1-Poisonous materials.
Incompatibilities
Violent reaction with aluminum, magnesium. Attacks metals in the presence of moisture.
Waste Disposal
Do not discharge waste sodium sulfate directly into sewers or surface waters. Recovered sodium sulfate may be disposed of by burial in a landfill.
Physical properties
Anhydrous sodium sulfate is a white crystalline powder; orthorhombic or hexagonal structure; hygroscopic; refractive index 1.468; hardness 2.8 Mohs; density 2.664 g/cm3; melts at 884°C; soluble in water, insoluble in ethanol.
The decahydrate consists of colorless monoclinic crystals; refractive index 1.394; hardness 1.8 Mohs; density 1.4 6g/cm3; decomposes at 32°C; soluble in water; insoluble in ethanol.
Occurrence
Sodium sulfate occurs in nature as the minerals mirabilite and thenardite. While thenardite is the anhydrous form of Na2SO4, mirabilite is a naturallyoccurring decahydrate, Na2SO4?10H2O.
Sodium sulfate is one of the most important sodium salts. The decahydrate,commonly known as the Glauber’s salt, was first prepared by Johann Glauber in the seventeenth century as a by-product in making hydrochloric acid from sulfuric acid and sodium chloride.
Sodium sulfate is used in manufacturing paper pulp by the Kraft Process. Other uses are in manufacturing glass and ultramarine; in dyeing and printing textiles; as a filler in synthetic detergents; and for standardizing dyes. A major use of anhydrous sodium sulfate is as an agent to remove water from organic solvents and their extracts for organic synthesis and instrumental analysis. Sodium sulfate is a common laboratory reagent. Also, it is used to prepare other sodium salts.
Production Methods
Sodium sulfate is mined from its natural mineral deposits and subjected to purification.
Sodium sulfate is synthesized by the Mannheim process or Hargreaves process. Manheim’s process is based on Glauber’s reaction between sulfuric acid and sodium chloride: 2NaCl + H2SO4 → Na2SO4 + 2HCl↑
The process was devised by Johann Glauber to produce hydrochloric acid. Sodium sulfate is isolated from the solution by fractional crystallization.
Hargreaves’ process also was developed to produce hydrochloric acid. It is a variation of Mannheim’s method. In this method, sulfur dioxide is used instead of sulfuric acid. The reaction is as follows: 4NaCl + 2SO2 + O2 + 2H2O → 2Na2SO4 + 4HCl↑
Sodium sulfate also is obtained as a byproduct of manufacturing phenol by caustic fusion.
Definition
A white crystalline compound, Na2SO4, usually known as the anhydrous compound (orthorhombic; r.d. 2.67; m.p. 888°C) or the decahydrate (monoclinic; r.d. 1.46; which loses water at 100°C). The decahydrate is known as Glauber’s salt. A metastable heptahydrate (Na2SO4·7H2O) also exists. All forms are soluble in water, dissolving to give a neutral solution. The compound occurs naturally as
mirabilite (Na2SO4·10H2O),
threnardite (Na2SO4), and
glauberite (Na2SO4·CaSO4).
Sodium sulphate may be produced industrially by the reaction of magnesium sulphate with sodium chloride in solution followed by crystallization, or by the reaction of concentrated sulphuric acid with solid sodium chloride. The latter method was used in the Leblanc process for the production of alkali and has given the name salt cake to impure industrial sodium sulphate. Sodium sulphate is used in the manufacture of glass and soft glazes and in dyeing to promote an even finish. It also finds medicinal application as a purgative and in commercial aperient salts.
General Description
Sodium sulfate (Na2SO4) can be obtained directly via precipitation from a saturated solution of Na2SO4 at room temperature (20°C). Its crystallization and growth rates at room temperature (20°C) under various conditions have been investigated. Sodium sulfate can be produced during Leblanc process, from sodium chloride and sulfuric acid.

Veterinary Drugs and Treatments
Sodium sulfate is used as a saline cathartic, primarily in food animals.
Purification Methods
Crystallise sodium sulfate from water at 30o (1.1mL/g) by cooling to 0o. It becomes anhydrous at 32o.

Description
Sodium Sulfate, Na2S04, also known as thenardite and salt cake, is a crystalline compound that melts at 888°C (1632°F). Sodium Sulfate is found in natural form(thenardite) in Chile and Spain. It is used in the manufacture of paperboard, glass,and freezing mixtures. The hydrate, Na2S04·10H20, also known as "Glauber's salt," is a white water-soluble solid formed by heating Sodium chloride and sulfuric acid. It is used in dyeing,manufacturing glass,and in the preparation of sodium bisulfate. 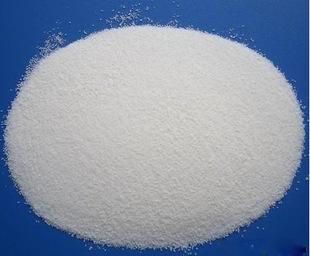