description
Methyl bromide (CH3Br) is a halogenated aliphatic hydrocarbon. It is a colorless gas at room temperature and standard pressure.It is 3 times heavier than air. It is odorless except at high concentrations, when it has a burning taste and sweet, chloroformlike smell. Commercially, it is available as a liquefied gas. Some formulations also contain chloropicrin or amyl acetate as a warning agent. 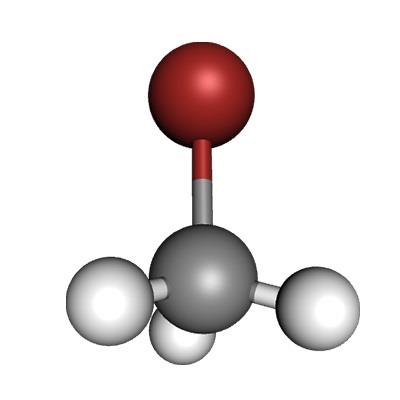 Methyl bromide has been used to treat dry packaged foods in mills and warehouses as well as used as a soil fumigant to control nematodes and fungi.
uses
Methyl bromide was used as an anesthetic in the early 1900s, but fatalities halted this practice. Today, methyl bromide is used widely as a fumigant for all types of dry food stuffs, in grain elevators, mills, ships, warehouses, green-houses, and food-processing facilities for the control of nematodes, fungi, and weeds. It is also used as an insecticide, fire extinguisher, and refrigerant, although its domestic use was banned in 1987. Methyl bromide is also used as a methylating chemical in manufacturing and as a low-boiling solvent for extracting oils from nuts, seeds, and flowers. It is termed a structural or commodity fumigant, which is a class term from the Environmental Protection Agency.
Historically, poisonings involving the general public were mainly associated with the methyl bromide used in fire extinguishers. Other poisoning involved unauthorized entry into buildings being fumigated with methyl bromide.
Methyl bromide has a threshold limit value–time weighted average (TLV-TWA) of 5 ppm and the IDLH concentration is 2,000 ppm. The Occupational Safety and Health Administration (OSHA) permissible exposure limit is 20 ppm.
Health Hazard
Methyl bromide is very irritating to the lower respiratory tract. It is thought that the parent compound is responsible for the toxicity of the methyl bromide, with the mechanism of toxicity possibly having to do with its ability to methylate sulfhydryl enzymes. Exposure to high concentrations of methyl bromide can lead to pulmonary edema or hemorrhage, and typically of delayed onset (several hours after exposure). Symptoms of acute intoxication include those consistent with central nervous system depression such as headache, dizziness, throat irritation, nausea, cough visual disturbances, vomiting, and ataxia. Exposures to very high concentrations can lead to unconsciousness. In cases of exposure to fatal levels of methyl bromide, death typically occurs within 4–6h to 1–2 days postexposure, with the cause of death being respiratory or cardiovascular failure resulting from pulmonary edema. Dermal exposure to liquid methyl bromide can cause skin damage in the form of burning, itching, and blistering. Treatment of methyl bromide poisoning is symptomatic and also includes removal of contaminated clothing. The USEPA Office of Pesticide Programs has classified methyl bromide as Not Likely to be Carcinogenic in Humans.
https://www.unep.org/
Toxicodynamics
The mode of action of methyl bromide is still not understood. Several mechanisms of toxicity are postulated, including the direct cytotoxic effect of the intact methyl bromide molecule or toxicity due to one of its metabolites.
Methyl bromide is a potent alkylating agent with high affinity for sulfhydryl and amino groups. It reacts in vitro with a number of sulfhydrylcontaining enzymes and causes irreversible inhibition of microsomal metabolism. It binds to amine groups in amino acids, interfering with protein synthesis and function. Also it may methylate many other cellular components such as GSH, proteins, DNA, and RNA.The methanethiol and formaldehyde metabolites may have a role in neurologic and visual changes. The bromide ion concentrations are insufficient to explain methyl bromide toxicity.

HazardClass
2.3
HS Code
29033990
storage
Handling and storage of bromomethane cylinders must meet the specifi cations laid down by the regulatory authorities. The cylinders must undergo the required and periodic tests
storage
Methyl bromide (Bromomethane) should be kept stored in sealed containers to keep it from evaporating.
Precautions
Occupational workers should use appropriate ventilation during production and formulation of bromomethane at the workplace. The ventilation must be suffi cient to maintain the levels of bromomethane below the prescribed OEL. Local exhaust ventilation at source or vapor extraction may also be used. Gloves or rubber boots should not be used as the liquid or concentrated vapor may be trapped inside them
Safety Profile
Suspected carcinogen with experimental carcinogenic data. A human poison by inhalation. Human systemic effects by inhalation: anorexia, nausea or vomiting. Corrosive to skin; can produce severe burns. Human mutation data reported. A powerful fumigant gas that is one of the most toxic of the common organic hahdes. It is hemotoxic and narcotic with delayed action. The effects are cumulative and damaging to nervous system, hdneys, and lung. Central nervous system effects include blurred vision, mental confusion, numbness, tremors, and speech defects. Methyl bromide is reported to be eight times more toxic on inhalation than ethyl bromide. Moreover, because of its greater volatility, it is a much more frequent cause of poisoning. Death following acute poisoning is usually caused by its irritant effect on the lungs. In chronic poisoning, death is due to injury to the central nervous system. Fatal poisoning has always resulted from exposure to relatively high concentrations of methyl bromide vapors (from 8600 to 60,000 ppm). Nonfatal poisoning has resulted from exposure to concentrations as low as 100-500 ppm. In addtion to injury to the lung and central nervous system, the kidneys may be damaged, with development of albuminuria and, in fatal cases, cloudy swelhng and/or tubular degeneration. The liver may be enlarged. There are no characteristic blood changes. Mixtures of 10-1 5 percent with air may be ignited with difficulty. Moderately explosive when exposed to sparks or flame. Forms explosive mixtures with air within narrow limits at atmospheric pressure, with wider limits at higher pressure. The explosive sensitivity of mixtures with air may be increased by the presence of aluminum, magnesium, zinc, or their alloys. Incompatible with metals, dunethyl sulfoxide, ethylene oxide. To fight fire, use foam, water, CO2, dry chemical. When heated to decomposition it emits toxic fumes of Br-. See also BROMIDES
Hazardous Substances Data
74-83-9(Hazardous Substances Data)