General Description
Odorless white to light tan solid. Sinks and mixes slowly with water.
Reactivity Profile
SALICYLIC ACID(69-72-7) is a carboxylic acid. Carboxylic acids donate hydrogen ions if a base is present to accept them. They react in this way with all bases, both organic (for example, the amines) and inorganic. Their reactions with bases, called "neutralizations", are accompanied by the evolution of substantial amounts of heat. Neutralization between an acid and a base produces water plus a salt. Carboxylic acids with six or fewer carbon atoms are freely or moderately soluble in water; those with more than six carbons are slightly soluble in water. Soluble carboxylic acid dissociate to an extent in water to yield hydrogen ions. The pH of solutions of carboxylic acids is therefore less than 7.0. Many insoluble carboxylic acids react rapidly with aqueous solutions containing a chemical base and dissolve as the neutralization generates a soluble salt. Carboxylic acids in aqueous solution and liquid or molten carboxylic acids can react with active metals to form gaseous hydrogen and a metal salt. Such reactions occur in principle for solid carboxylic acids as well, but are slow if the solid acid remains dry. Even "insoluble" carboxylic acids may absorb enough water from the air and dissolve sufficiently in SALICYLIC ACID(69-72-7) to corrode or dissolve iron, steel, and aluminum parts and containers. Carboxylic acids, like other acids, react with cyanide salts to generate gaseous hydrogen cyanide. The reaction is slower for dry, solid carboxylic acids. Insoluble carboxylic acids react with solutions of cyanides to cause the release of gaseous hydrogen cyanide. Flammable and/or toxic gases and heat are generated by the reaction of carboxylic acids with diazo compounds, dithiocarbamates, isocyanates, mercaptans, nitrides, and sulfides. Carboxylic acids, especially in aqueous solution, also react with sulfites, nitrites, thiosulfates (to give H2S and SO3), dithionites (SO2), to generate flammable and/or toxic gases and heat. Their reaction with carbonates and bicarbonates generates a harmless gas (carbon dioxide) but still heat. Like other organic compounds, carboxylic acids can be oxidized by strong oxidizing agents and reduced by strong reducing agents. These reactions generate heat. A wide variety of products is possible. Like other acids, carboxylic acids may initiate polymerization reactions; like other acids, they often catalyze (increase the rate of) chemical reactions.
Air & Water Reactions
Sublimes and forms vapor or dust that may explode [USCG, 1999].
Hazard
Respiratory alkalosis, hyperkalemia, hyperthermia, dehydration, convulsions, shock, res- piratory paralysis, respiratory acidosis, lesions and death from respiratory collapse; fetotoxic.
Health Hazard
Inhalation of dust irritates nose and throat. Vomiting may occur spontaneously if large amounts are swallowed. Contact with eyes causes irritation, marked pain, and corneal injury which should heal. Prolonged or repeated skin contact may cause marked irritation or even a mild burn.
Potential Exposure
Used as a topical keratolytic agent; in manufacture of aspirin, salicylates, resins, as a dyestuff intermediate; prevulcanization inhibitor; analytical reagent; fungicide, antiseptic, and food preservative.
First aid
If this chemical gets into the eyes, remove any contact lenses at once and irrigate immediately for at least 15 minutes, occasionally lifting upper and lower lids. Seek medical attention immediately. Skin contact: remove contaminated clothing and wash immediately with soap and water. Seek medical attention immediately. If this chemical has been inhaled, remove from exposure, begin rescue breathing (using universal precautions, including resuscita- tion mask) if breathing has stopped and CPR if heart action has stopped. Transfer promptly to a medical facility. When this chemical has been swallowed, get medical attention. Give large quantities of water and induce vomiting. Do not make an unconscious person vomit. 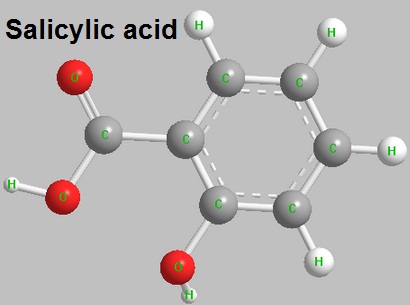 Figure1 The structure of salicylic acid
Salicylic acid has sterilization ability, 2.5% alcohol solution (called spiritus) is used as a topical medicine in the treatment of tinea manus and tinea pedis, also can be made into ointment. Sodium salicylate can be used for food preservative or preservatives, also can be used for the preparation of toothpaste, mouthwash. Salicylic acid has antipyretic and analgesic effects, can cure rheumatism and so on. It's all esters can be used as drug and spices. Methyl salicylate has pleasant aromas of holly, is used for the preparation of perfume and soap flavor. The methyl salicylate is coated on the skin, can penetrate into the muscle and let out of salicylic acid to release local pain, so it also can be used for the treatment of pain, contusion, sprain and other medication. Isoamyl salicylate has orchid aroma, benzyl salicylate has weak ester aroma, both can prepare perfume or soap flavor. The common name of phenyl salicylate is Salo, was hydrolyzed into phenol and salicylic acid in the intestine , is a kind of effective enteral preservatives. Another Kind drug related to salicylic acid is para aminosalicylic acid (PAS, see "Para amino salicylic acid), Its sodium and calcium salts are used as anti TB drugs for acute exudative pulmonary tuberculosis (TB) and mucosal tuberculosis, is a weak antimicrobial drug, the effect is only 2% of streptomycin, often combined with streptomycin and isoniazid , in order to enhance the curative effect. It can be acetylated to the aspirin.
The above information is Chemicalbook Hanya edited.
Chemical Properties
Salicylic acid is a white powder with an acrid taste that is stable in air but gradually discolored by light. Soluble in acetone, oil of turpentine, alcohol, ether,benzene; slightly soluble in water,and combustible. Derived by reacting a hot solution of sodium phenolate with carbon dioxide and acidifying the sodium salt thus formed. Used in the manufacture of aspirin and salicylates, resins, dyestuff intermediate, prevulcanization inhibitor, analytical reagent,and fungicide.
Benefits for Skin
Salicylic acid is a beta hydroxy acid that also sloughs dead cell buildup within the follicle, acts as a mild antibacterial, and has soothing properties. Salicylic acid is regarded to be less irritating than benzoyl peroxide and has less allergy potential, but it is also less aggressive in treating acne. It is often used for treating milder forms of acne. The concentration in OTC drugs is limited to 2 percent. Salicylic acid is also used as a performance ingredient exfoliant in smaller concentrations, without making a drug claim.
Application
Salicylic acid is widely used, eczema, psoriasis, salicylic acid can be used in acne, dandruff. The concentration of 3%~6%  can be used to horny, higher than 6% of salicylic acid can damage to tissue . Below 40% of concentration is suitable for the treatment of thick cocoon, corns and warts. Salicylic acid can also be added in the treatment of acne and dandruff. Nowadays many famous cosmetic ingredients: in 1993, Clinique CLINIQUE first launched 1% salicylic acid in soft water cream, immediately became one of Clinique's most successful products; In 1998, SK-II crystal induced skin cream added 1.5%BHA ingredients to the original, and salicylic acid has effect of treatment pores and cutin like the egg peeling analogy that caused the market boom; open access Olay popular products activating cream also contains 1.5% BHA components. However, due to the high concentration of salicylic acid, it has a certain degree of damage, cosmetics containing salicylic acid concentration has generally been limited between 0.2%~1.5%, containing salicylic acid cosmetics shall be added to the note of warning signs to determine the safety of long-term use and children under 3 years of age also shall not be used.
Uses
Salicylic acid is an FDA approved skin care ingredient used for the topical treatment of acne, and it's the only beta hydroxy acid (BHA) used in skin care products. Perfect for oily skin, salicylic acid is best known for its ability to deep clean excess oil out of pores and reduce oil production moving forward. Because salicylic acid keeps pores clean and unclogged, it prevents future whiteheads and blackheads from developing. Salicylic acid also exfoliates dead skin, and its anti-inflammatory properties make it a prime ingredient for those with psoriasis. Salicylic acid naturally occurs in willow bark, sweet birch bark, and wintergreen leaves, but synthetic versions are also used in skin care products.
Methods of production
1. The phenol and sodium hydroxide react to produce phenol sodium, distillation and dehydration, CO2 carboxylation reaction to obtain sodium salicylate, then using sulfuric acid and produce crude product. The crude product through the sublimation refined to the finished product. Raw materials consumption quota: phenol (98%) 704kg/t, alkali burn (95%) 417kg/t, sulfate (95%) 500kg/t, carbon dioxide (99%) 467kg/t.
2.The preparation method of the method is that the sodium salt of phenol and carbon dioxide can be obtained by acidification.
phenol and liquid caustic soda are produced into solution of the sodium salt of phenol, vacuum drying, and then to 100℃, slowly put to the dry carbon dioxide, when the pressure reaches 0.7~0.8MPa, stop passing carbon dioxide, warming up to 140 to 180℃. After the reaction with water, sodium salicylate dissolved and decolorization, filtering, coupled with the sulfuric acid, namely precipitation salicylic acid, after filtering, washing and drying to obtain the product.