General Description
A colorless fairly volatile liquid with a faintly sweet pungent odor like that of ethyl alcohol. Completely mixes with water. The vapors are slightly heavier than air and may travel some distance to a source of ignition and flash back. Any accumulation of vapors in confined spaces, such as buildings or sewers, may explode if ignited. Used to make chemicals, to remove water from automotive and aviation fuels, as a solvent for paints and plastics, and as an ingredient in a wide variety of products.
Reactivity Profile
METHANOL(67-56-1) reacts violently with acetyl bromide [Merck 11th ed. 1989]. Mixtures with concentrated sulfuric acid and concentrated hydrogen peroxide can cause explosions. Reacts with hypochlorous acid either in water solution or mixed water/carbon tetrachloride solution to give methyl hypochlorite, which decomposes in the cold and may explode on exposure to sunlight or heat. Gives the same product with chlorine. Can react explosively with isocyanates under basic conditions. The presence of an inert solvent mitigates this reaction [Wischmeyer 1969]. A violent exothermic reaction occurred between methyl alcohol and bromine in a mixing cylinder [MCA Case History 1863. 1972]. A flask of anhydrous lead perchlorate dissolved in METHANOL(67-56-1) exploded when METHANOL(67-56-1) was disturbed [J. Am. Chem. Soc. 52:2391. 1930]. P4O6 reacts violently with METHANOL(67-56-1). (Thorpe, T. E. et al., J. Chem. Soc., 1890, 57, 569-573). Ethanol or METHANOL(67-56-1) can ignite on contact with a platinum-black catalyst. (Urben 1794).
Air & Water Reactions
Highly flammable. Soluble in water in all proportions.
Hazard
Flammable, dangerous fire risk. Explosive limits in air 6–36.5% by volume. Toxic by ingestion (causes blindness). Headache, eye damage, dizziness, and nausea.
Health Hazard
Exposure to excessive vapor causes eye irritation, head-ache, fatigue and drowsiness. High concentrations can produce central nervous system depression and optic nerve damage. 50,000 ppm will probably cause death in 1 to 2 hrs. Can be absorbed through skin. Swallowing may cause death or eye damage.
Fire Hazard
Behavior in Fire: Containers may explode.
First aid
If this chemical gets into the eyes, remove any contact lenses at once and irrigate immediately for at least 15 minutes, occasionally lifting upper and lower lids. Seek medical attention immediately. If this chemical contacts the skin, remove contaminated clothing and wash immediately with soap and water. Seek medical attention immediately. If this chemical has been inhaled, remove from exposure, begin rescue breathing (using universal precautions, including resuscitation mask) if breathing has stopped and CPR if heart action has stopped. Transfer promptly to a medical facility. When this chemical has been swallowed, get medical attention. Give large quantities of water and induce vomiting. Do not make an unconscious person vomit.
Shipping
UN1230 Methanol, Hazard Class: 3; Labels: 3-Flammable liquid, 6.1-Poisonous material. (International)
Incompatibilities
Methanol reacts violently with strong oxidizers, causing a fire and explosion hazard.
Waste Disposal
Consult with environmental regulatory agencies for guidance on acceptable disposal practices. Generators of waste containing this contaminant (≥100 kg/mo) must conform to EPA regulations governing storage, transportation, treatment, and waste disposal. Incineration

Introduction
Methanol is the simplest fatty alcohol. It is a colorless, flammable, irritating liquid with a boiling point of 64.7°C, a melting point of -93.90°C, and a relative density of 0.7913. Soluble in water and most organic solvents. Its severe toxicity can damage the optic nerve. Once swallowed, it can make the eyes blind and even cause death.
Methanol has the general properties of a primary aliphatic alcohol. The three hydrogen atoms on a carbon atom with a hydroxyl group can be oxidized, orderly generating formaldehyde, formic acid, and carbon dioxide. Therefore, it is largely used in the synthesis of formaldehyde. Methanol is easily converted into important organic synthesis intermediates such as methyl carboxylate, methyl chloride and methylamine, and it is also applied as important organic solvents, extraction agents and alcohol denaturants.
Chemical Properties
Methanol is a clear, colorless liquid with a characteristic pungent odor (NTP NIEHS web accessed 2/16/2013). The air odor threshold has been reported as 1500 ppm (approximately 2000mg/m3), much higher than the occupational guidelines. 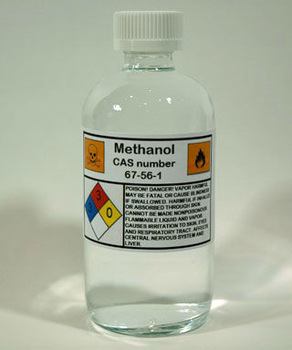 Methanol (methyl alcohol; wood alcohol) is used extensively as a solvent for lacquers, paints, varnishes, cements, inks, dyes, plastics, and various industrial coatings. Large quantities are used in the production of formaldehyde and other chemical derivatives such as acetic acid, methyl halides and terephthalate, methyl methacrylate, and methylamines. Methanol is also used as a gasoline additive, as a component of lacquer thinners, in antifreeze preparations of the “nonpermanent” type, and in canned heating preparations of jellied alcohol. It is also used in duplicating fluid, in paint removers, and as a cleaning agent. The potential for methanol as a future alternative for gasoline indicates that the use of this chemical will most likely increase rather than decrease. At room temperature, methanol is a colorless liquid with a pungent odor. It is relatively volatile, with a vapor pressure of 96 mmHg and a vapor density of 1.11. It is miscible with water and soluble with other organic solvents. It is found in nature as a fermentation product of wood and as a constituent of some fruits and vegetables.
Uses
Methanol is an important chemical raw material for fine chemicals. Its carbonylation at 3.5 MPa and 180-200° C in the presence of catalyst can produce acetic acid and further produce acetic anhydride. It reacts with syngas to prepare vinyl acetate in the presence of catalyst; reacts with isobutylene to produce tert-butyl methyl ether; prepare dimethyl oxalate through oxidization and carbonylation, and a further hydrogenation to produce ethylene glycol; reacts with toluene under catalyst and simultaneous oxidization to produce phenylethyl alcohol. It can be used as a good solvent, as a pesticide raw material, as an antifreeze agent, as a fuel and fuel additive (this is receiving increasing attention in environmental protection field). It is the main raw material in the preparation of formaldehyde, the raw material in medicine and spices production, a solvent in dyes and paint industries, the raw material in preparation of methanol single cell protein and synthesis of methyl ester.
▼
▲
Industry
Applications
Role/Benefit
Laboratory
HPLC, UV/VIS spectroscopy, and LCMS
Low UV cutoff
Chemical manufacture
Production of formaldehyde and its derivates
Main feedstock
Production of hydrocarbon chains and even aromatic systems
Main feedstock
Production of methyl tert-butyl ether
Methylation reagent
Production of dimethyl terephthalic acid, methyl methacrylate and acrylic acid methyl ester
Main feedstock
Plastics
Production of polymers
Main feedstock
Farm chemical
Production of insecticide and acaricide
Main feedstock
Pharmaceuticals
Production of sulfonamides, amycin, etc
Main feedstock
Fuel for vehicles
Pure methanol fuel
Pure methanol does not produce an opaque cloud of smoke in the event of an accident
Methanol gasoline
Blended directly into gasoline to produce a high-octane, efficient fuel with lower emissions than conventional gasoline
Chemical analysis
Determination of boron
Analysis agent
Determination of trace moisture in alcohols, saturated hydrocarbons, benzene, chloroform, pyridine
Analysis agent
Others
Separation of calcium sulfate and magnesium sulfate
Separation reagent
Separation of strontium bromide and barium bromide
Separation reagent
Anti-freezing agent
Effective component

Reactivities of Methanol
Methanol is the simplest aliphatic alcohol. It contains only one carbon atom. Unlike higher alcohols, it cannot form an olefin through dehydration. However, it can undergo other typical reactions of aliphatic alcohols involving cleavage of a C-H bond or O-H bond and displacement of the -OH group. Table 1 summarizes the reactions of methanol, which are classified in terms of their mechanisms. Examples of the reactions and products are given. Homolytic dissociation energies of the C-O and O-H bonds in methanol are relatively high. Catalysts are often used to activate the bonds and to increase the selectivity to desired products.
Methanol poisoning and First Aid Measures
Pathogenesis
First, methanol has a cumulative effect and is oxidized in the body into more toxic formaldehyde and formic acid. Methanol and its oxides directly damage the tissues, causing cerebral edema, meningeal hemorrhage, optic nerve and retinal atrophy, pulmonary congestion and edema, and hepatic and renal turbid swelling.
Second, methanol and its oxides cause blood circulation disorder, coenzyme system obstacles in vivo, resulting in lack of oxygen supply to the brain cortical cells, metabolic disorders, and related neurological and psychiatric symptoms.
Third, methanol oxidation products combine with the iron in the cytochrome oxidase, which inhibits the intracellular oxidation process thus causing metabolic disorders, acidosis along with organic acid accumulation in the body, and nerve cells impair.

If the conditions are strictly controlled, the yield can reach 100% and the purity can reach 99%.