General Description
Odorless white to off-white crystalline powder with a slightly bitter taste.
Reactivity Profile
DEXAMETHAZONE(50-02-2) may be sensitive to prolonged exposure to light. This chemical is incompatible with strong oxidizers, strong acids, acid chlorides and acid anhydrides. Oxidation may occur with bases.
Air & Water Reactions
Insoluble in water.
Fire Hazard
Flash point data for this chemical are not available; however, DEXAMETHAZONE is probably combustible.
Chemical Properties
White or almost white, crystalline powder.
Originator
Dexacen,Central,US,1977
Uses
Glucocorticoid.
Uses
Dexamethasone is used for the same indications as all corticosteroids; however, it exhibits a significantly more powerful anti-inflammatory and anti-allergic action. It is used for circulatory collapse—shock during or after surgical operations, trauma, blood loss, myocardial infarction, and burns. It is also used in severe infections—toxemia, vascular collapse in meningococcosis, septicemia, diphtheria, typhoid fever, and peritonitis. It is used in severe allergic conditions—asthmatic status, laryngeal edema, severe anaphylactic reactions to medicinal drugs, and pyrogenic reactions.
Indications
Cushing’s disease is defined as hypercortisolism due to chronic overproduction of corticotrophin by a corticotroph adenoma. Cortisol’s lack of suppressibility during the administration of low doses of dexamethasone but suppressibility during high-dose dexamethasone is the key diagnostic finding in 99% of the patients with Cushing’s disease. This contrasts with the lack of glucocorticoid suppressibility typically found in patients with corticotrophin-independent hypercortisolism (Cushing’s syndrome). A judicious selection of the available tests may be necessary to obtain an accurate diagnosis in patients with Cushing’s syndrome.
Manufacturing Process
The preparation of dexamethasone acetate is described in US Patent 3,007,923 as follows. 1.5 cc of dimethylformamide and 1.5 cc of anhydrous hydrofluoric acid are admixed and treated with 480 mg of 9β,11β-epoxy-17αhydroxy-21-acetoxy-16α-methyl-?1,4-pregnadiene-3,20-dione (prepared according to E.P. Oliveto et al, J. Am. Chem. Soc., 80, 44331, 1958). The steroid dissolves in about 15 minutes. The reaction mixture is shaken for two hours at a temperature between 0 and +5°C, and then poured into 75 cc of
water containing in suspension, 7.5 grams of sodium bicarbonate. The mixture is vacuum filtered, the filter cake washed and then dried at 100°C, yielding 460 mg of crude hexadecadrol contaminated with a small amount of the starting material. A single recrystallization from methylene chloride yields 370 mg of the pure product having a melting point of 170°C and 229°C. The mother liquor yields 62 mg of the starting material, and a remainder constituting a mixture of starting and final materials with little other contamination.
Brand name
Aeroseb-Dex (Allergan); Decadron (Merck); Dexone (Solvay Pharmaceuticals); Hexadrol (Organon); Maxidex (Alcon); Mymethasone (Morton Grove).
Therapeutic Function
9-Fluoro-11β,17-dihydroxy-21-acetoxy-16α-methylpregna1,4-diene-3,20-dione
Biological Activity
Glucocorticoid; anti-inflammatory. Reduces levels of activated NF- κ B in immature dendritic cells (DCs) and inhibits differentiation into mature DCs.
Biochem/physiol Actions
Target IC50: 5 nM Inhibiting the expression of inducible but not constitutive nitric oxide synthase in vascular endothelial cells
Pharmacokinetics
The activity of dexamethasone, as measured by glycogen deposition, is 20 times greater than that of hydrocortisone. It has five times the anti-inflammatory activity of prednisolone. Clinical data indicate that this compound has seven times the antirheumatic potency of prednisolone. It is roughly 30 times more potent than hydrocortisone. Its pharmacokinetics are presented in Table 33.3. Routes of metabolism for dexamethasone are similar to those for prednisolone, with its primary 6β-hydroxy metabolite being recovered in urine. Dexamethasone sodium phosphate is the water-soluble sodium salt of the 21-phosphate ester, with an IV half-life of less than 10 minutes because of rapid hydrolysis by plasma phosphatases. Peak plasma levels for dexamethasone usually are attained in approximately 10 to 20 minutes following its IV administered dose. A similar reaction occurs when the phosphate ester is applied topically or by inhalation.
Chemical Synthesis
Dexamethasone, 9α-fluoro-16α-methyl-11β,17,21-trihydroxypregna- 1,4-dien-3,20-dione (27.1.51), or simply 9α-fluoro-16α-methylprednisolone. The distinctive characteristic of dexamethasone is the presence of a fluorine atom at C9 of the steroid ring.
Dexamethasone is synthesized in a multistage process from 3α-acetoxy-16-pregnen- 11,20-dione, which is reacted with methylmagnesium bromide in the presence of lithium bromide to give 3α-hydroxy-16α-methylpregnan-11,20-dione (27.1.39), after which a 17α- hydroxyl group is added. This is done by a reaction with acetic anhydride in the presence of p-toluenesulfonic acid, forming the 3-acetoxy-17-enolacetate 27.1.40, which is epoxidized by perbenzoic acid 27.1.41, and the product is hydrolyzed by an alkali to give an oxyketone 27.1.42. Addition of another hydroxyl group at C21 is accomplished by subsequent bromination of a methyl group with molecular bromine, replacing the bromine atom with iodine, and reacting iodide with potassium acetate, which forms the corresponding acetoxyketone 27.1.43. The hydroxyl group at C3 is oxidized to a carbonyl by chromium(VI) oxide in pyridine, giving the 3,11,20-triketone 27.1.44, which again undergoes bromination by molecular bromine, but at position C4. Dehydrogenation of this compound is accomplished using semicarbazide, which results in the formation of an unsaturated triketone 27.1.45. In order to avoid formation of semicarbazones at the keto-groups at C3 and C20, the final product is treated with pyruvic acid. Semicarbazones are then specially formed at the keto-groups of C3 and C20, and the keto-group at C11 that does not take part in semicarbazone formation is reduced to hydroxyl group using sodium borohydride. After removing the protective semicarbzone groups, 21-O-acetoxy-16β-methylhydrocortisone (27.1.46) is formed. This is reacted with potassium acetate and transformed to the epoxide 27.1.49. Reacting this with hydrofluoric acid results in an opening of the epoxide ring, during which the fluorohydrin 27.1.50 is formed. Finally, microbiological dehydrogenation of this compound at C1–C2 and simultaneous deacetylation gives dexamethasone (27.1.51). 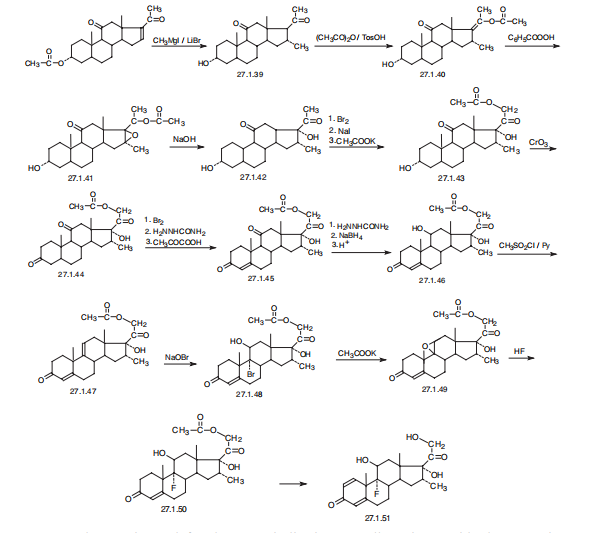 Veterinary Drugs and Treatments
Glucocorticoids have been used in an attempt to treat practically every malady that afflicts man or animal, but there are three broad uses and dosage ranges for use of these agents. 1) Replacement of glucocorticoid activity in patients with adrenal insufficiency, 2) as an antiinflammatory agent, and 3) as an immunosuppressive. Among some of the uses for glucocorticoids include treatment of: endocrine conditions (e.g., adrenal insufficiency), rheumatic diseases (e.g., rheumatoid arthritis), collagen diseases (e.g., systemic lupus), allergic states, respiratory diseases (e.g., asthma), dermatologic diseases (e.g., pemphigus, allergic dermatoses), hematologic disorders (e.g., thrombocytopenias, autoimmune hemolytic anemias), neoplasias, nervous system disorders (increased CSF pressure), GI diseases (e.g., ulcerative colitis exacerbations), and renal diseases (e.g., nephrotic syndrome). Some glucocorticoids are used topically in the eye and skin for various conditions or are injected intra-articularly or intralesionally. The above listing is certainly not complete. For specific dosages and indications refer to the Doses section.
High dose dexamethasone use for shock or CNS trauma is controversial; recent studies have not demonstrated significant benefit and it actually may cause increased deleterious effects.
Purification Methods
Dexamethasone has been recrystallised from Et2O or small volumes of EtOAc. Its solubility in H2O is 10 mg/100mL at 25o; and is freely soluble in Me2CO, EtOH and CHCl3. [Arth et al. J Am Chem Soc 80 3161 1958; for the -methyl isomer see Taub et al. J Am Chem Soc 82 4025 1960, see Beilstein 8 IV 3501.]

Description
Dexamethasone is an Anti-inflammatory glucocorticoid that is used to treat inflammatory and autoimmune conditions such as rheumatoid arthritis and bronchospasm. It is useful to study apoptosis, cell signaling pathways and gene expression. It is associated with marbofloxacin and clotrimazole and finds application in veterinary medicine to treat difficult ear infections in dogs. It is also used to treat horses with swelling of of distal limbs and general bruising in combination with trichlormethiazide.
Dexamethasone induces the production of phospholipase A2 inhibitory protein (lipocortin). It also inhibits induction of nitric oxide synthase (IC50=5 nM). Dexamethasone has been shown to cause reduction in cyclin A and Cd k2 activity, inhibition of G1/S transition in osteoblasts and inhibition of phosphorylation of Rb protein in vitro. Dexamethasone has been observed to induce apoptosis in human thymocytes and eosinophils, but inhibits apoptosis in neutrophils in vitro. Dexamethasone is an activator of IDO.
Dexamethasone Inhibits the expression of the inducible but not the constitutive nitric oxide synthase in vascular endothelial cells (IC50=5 nM). Dexamethasone regulates T cell survival, growth, and differentiation.Enhances active cation transport in aortic smooth muscle cells by stimulating the Na+-K+ pump. Has anti-inflammatory and anti-rheumatic properties. Induces apoptosis in human thymocytes. In general, 500-1000 nM of dexamethasone is sufficient to induce apoptosis following a 6-hour incubation at 37°C.
Side Effects
Dexamethasone is a artificially synthetic glucocorticoid, belonging to a long-term glucocorticoid drugs. Glucocorticoids can promote the metabolism of the three major nutrients while preventing protein synthesis with long-term topical being able to causing more serious consequences. However, the adverse effects should be much smaller than oral medication. Common side effects of systemic corticosteroid include:
It can cause stomach discomfort and increased sensitivity to stomach ulcers.
It can Increase the appetite and results in a significant increase in body weight.
Potential patients with diabetes: glucose intolerance in patients with aggravating existing diabetes.
It can cause mental illness including personality changes, irritability, agitation, and mania.
It can be used for the long-term treatment of osteoporosis: pathological fractures (such as hip).
It can cause elevated liver enzymes, fatty liver degeneration (usually reversible).
For patients of nephrotic syndrome, applying long-term high-dose medication is likely to cause large side effects such as gastrointestinal ulcers and avascular necrosis. For treatment of nephrotic syndrome, it is better to apply prednisone acetate tablets.
Dexamethasone can be used for the treatment of high altitude cerebral edema and pulmonary edema. Upon climbing expeditions, people can apply it to alleviate altitude sickness.
Combination with marbofloxacin and clotrimazole, etc. can be used for treating the ear infection and allergies of a dog or a bird.
The above information is edited by the chemicalbook of Dai Xiongfeng.
Drug Reactions
Dexamethasone is a corticosteroid known as a glucocorticoid. Corticosteroids are meant to resemble a naturally occurring hormone produced in the adrenal cortex, cortisol. Corticosteroids act on the immune system by blocking the production of substances that trigger inflammatory and immune responses.
Dexamethasone may react with these drugs:
Amphotericin
Aspirin
Cyclophosphamide
Cyclosporine
Digoxin
Daunorubicin HCl
Doxorubicin HCl
Insulin
Mitotane
Phenobarbital
Phenytoin sodium
Rifampin
Rimadyl