Definition
Found in animal organs and yeast. Active in the citric acid cycle in carbohydrate metabolism. The n in the formula varies according to the source.
Appearance
Yellow-Orange Crystalline Powder
Melting point
49-51 °C

Originator
Neuquinon,Eisai,Japan,1974
Occurrence
Coenzyme Q10 is found in dietary sources.
Manufacturing Process
A small fermentation tank (5,000 parts by volume capacity) was charged with 3,000 parts by volume of a culture medium (pH 6.0) comprising 3% glucose, 1% polypepton, 0.5% yeast extract and 0.5% malt extract. The medium was sterilized by heating in a conventional manner and cooled. This medium was inoculated with 150 parts by volume of a pre-culture of Sporidiobolus ruinenii CBS-5001, which had been prepared by growing the same strain on a medium of the same composition as above at 28°C for one day. The inoculated medium was incubated at 28°C and under agitation at 800 rpm with sparging at a rate of 3,000 parts by volume per minute for 24 hours. During this fermentation period, the medium was maintained at pH 6.0 with ammonia and sulfuric acid.
The resultant fermentation broth was centrifuged to harvest the microbial cells, and they were washed with water and centrifuged a second time, whereupon a living cell paste was obtained. (There was obtained an amount of cells equivalent to 54 parts on a dry basis, which contained 920 μg of ubiquinone-10 per gram of dry cells.)
The moist cells were suspended in 750 parts of volume of ethanol and extracted by warming at 60°C for 1 hour. A total of 3 extractions were carried out in a similar manner and the extracts were pooled, diluted with water and further extracted three times with 1,000 parts of volume portions of n_x0002_hexane. The n-hexane layer was concentrated to dryness under reduced pressure to recover 4.12 parts of a yellow oil. This oily residue was dissolved in 6 parts by volume of benzene and passed through a column (500 parts by volume capacity) packed with Floridil (100 to 200 meshes). Elution was carried out using benzene and the eluate was collected in 10 parts by volume fractions. Each fraction was analyzed by thin-layer chromatography and color reaction and the fractions rich in ubiquinone-10 were pooled and concentrated under reduced pressure. By this procedure was obtained 0.562 part of a yellow oil. This product was dissolved in 5 parts by volume of chloroform, coated onto a thin layer plate of silica gel GF254 (silica gel with calcium sulfate) and developed with benzene. The fractions corresponding to ubiquinone-10 were extracted, whereby 0.054 part of a yellow oil was obtained. This oil was dissolved in 10 parts by volume of ethanol and allowed to cool, whereupon 0.029 part of yellow crystals of ubiquinone-10 were obtained, its melting point 48° to 50°C.
There are also synthetic routes to the ubiquinones as described in US Patents 3,068,295; 3,896,153 and 4,062,879.
Therapeutic Function
UBIDECARENONE
Purification Methods
Purify it by recrystallisation from EtOH, EtOH/Me2CO or Et2O/EtOH and by chromatography on silica gel using isoPrOH/Et2O (3:1) to give orange crystals. It has max 270nm ( 15,170) in pet ether. [Terao et al. J Org Chem 44 868 1979, NMR and MS: Naruta et al. J Org Chem 45 4097 1980, IR: Lester et al. Biochem Biophys Acta 42 1278 1959, NMR: Planta et al. Helv Chim Acta 42 1278 1959; Morton Biochemical Spectroscopy (Adam Hilger, London, 1975) p 491].

Outline
Ubidecarenone is a small molecule lipid-soluble quinone compounds widely found in plant and animal cells, its structure is similar to the structure of vitamin K, used alone or in combination with vitamin E as a powerful antioxidant. It is required for energy generation (ATP) circulation. It promotes phosphorylation reaction and protect the structural integrity of the biofilm oxidation function. Ubidecarenone of different sources are different with its side chain prenyl units number, Ubidecarenone of humans and mammals are 10 prenyl units, thus it is called Ubidecarenone. Ubidecarenone plays an important role in proton translocation in vivo respiratory chain and electron transfer , it is the cell respiration and cell metabolism activator, and also an important antioxidant and non-specific immune enhancer. Modern biology study found that excess free radicals in the body can cause damage to the genetic material of the cell membrane, and macro manifested as aging, cancer and other symptoms. Free radical scavenging process is commonly referred to as "antioxidant." We know that life activities is driven by a variety of enzymes. Enzymes are large proteins, enzymes need some small molecules to help in exercising some functions , these substances are called "coenzyme." Ubidecarenone exists in the mitochondria within the cells. Mitochondria are the place to produce energy in cells, many enzymes and other molecules are involved in the energy production process, and Ubidecarenone is one of the indispensable one. In the organs with more energy consumption in the human body , the content of Ubidecarenone will be relatively high, such as heart, liver, kidney, kidney, spleen, pancreas, adrenal, the content is particularly rich. The total body content of Ubidecarenone is only 500-1500mg, the content changes with age, it decreased for most people after the age of 20 . Lack of Ubidecarenone are usually caused heart failure, gum disease, arrhythmias, stroke, hypertension (blood pressure, food), heart disease, arteriosclerosis, cancer, Parkinson's disease, muscular dystrophy, AIDS. Ubidecarenone can successfully prevent and treat these diseases, from 40 years ago when it was found and isolated, Ubidecarenone has been conducted hundreds of clinical studies, a lot of evidence shows that nutrition is necessary for health (health food) .
Chemical Properties
Ubidecarenone occurs as a yellow to orange crystalline powder. It is odorless and has no taste. It is soluble in diethyl ether, very slightly soluble in ethanol (99.5), and practically insoluble in water. It is gradually decomposed and colored by light. 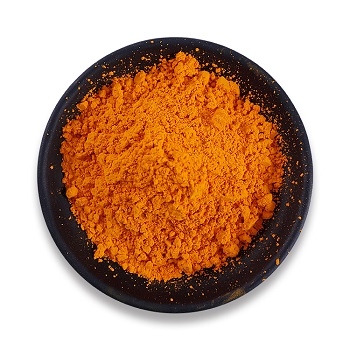