Description
Cupric hydroxide appears as a blue powder and it is not stable. Cupric hydroxide is used as a mordant and pigment, in the manufacture of many copper salts, and for staining paper. It is used as a fungicide/bactericide on fruits, vegetables, and ornamentals. It can be used as catalyst, feed additive, and a cuprammonium rayon process reagent to make the first semi-synthetic fiber product, Rayon. 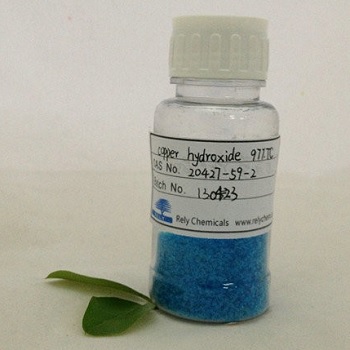 Furthermore, cupric hydroxide is used in the wood preservative products in aqueous systems.
Chemical Properties
Copper(II) hydroxide, Cu(OH)2, is thermodynamically unstable with respect to decomposition to the oxide. Copper(II) hydroxide prepared by the addition of sodium hydroxide to a salt of copper decomposes at temperatures above 100°C, and in the presence of excess alkali, it decomposes at temperatures above 50°C. It is virtually insoluble in water and decomposes in hot water to the more stable copper(II) oxide and water. Copper(II) hydroxide dissolves quickly in mineral acids and ammonia solution. It is mildly amphoteric, and in concentrated alkali, it forms [Cu(OH)3]- or [Cu(OH)4]2- ions. Copper(II) hydroxides can be produced in a kinetically stabilized form depending on the method of precipitation and choice of additives.
Uses
Copper(II) hydroxide has been used as an alternative to the Bordeaux mixture, a fungicide and nematicide.
The orthorhombic nature of copper hydroxide crystals was determined by X ray diffraction. Copper hydroxide can act as a heterogeneous catalyst in the selective oxidative cross coupling of terminal alkynes to yield their corresponding ynamides.
Copper(II) hydroxide is also occasionally used as ceramic colorant. Used as an active precursor in the production of copper(II) compounds. Ammonia-processed copper(II) hydroxide is used in the production of copper(II) naphthenate, copper(II) 2-ethylhexanoate, and copper soaps. Ammonia-processed copper(II) hydroxide is also used in the production of rayon (Schweiter's reagent) and in the stabilization of nylon; as a feed additive, a catalyst in the vulcanization of polysulfide rubber, and an antifouling pigment.
Copper hydroxide based monoliths can be used in the synthesis of copper hydroxide-based monolithic xerogels. Potential applications of this metal organic frameworks (MOFs) include gas storage, separation, drug delivery, and biomedicine. Supported Cu(OH)x can be used as a catalyst for the aerobic cross dehydrogenative coupling of benzenethiols and cyclic amides to yield N-acylsulfenamides.
Preparation
Copper(II) hydroxide is produced by a reaction of copper oxychloride in an aqueous suspension with alkali hydroxide or alkaline earth metal hydroxide in the presence of a stabilizing agent and the product is separated and washed.
Cu(NO3)2 + NaOH --->Cu(OH)2 + NaNO3
Add a magnetic stirring bar to the beaker and place the flask on a microscale magnetic stirrer. At room temperature, with stirring, carefully add 6M NaOH solution dropwise until the solution is basic to red litmus paper. Use a capillary tube to remove sample for pH testing. A light blue precipitate of copper(II) hydroxide is formed as this reaction is carried out. Make sure the litmus paper has actually changed from red to blue, rather than simply being colored blue by the blue precipitate.
References
[1] Michael Ash, Handbook of Preservatives, 2004
[2] Günter Joseph and Konrad J. A. Kundig, Copper: Its Trade, Manufacture, Use, and Environmental Status, 1999
[4] Bo Liu, Bin Liu, Yongbo Zhou and Wanzhi Chen, Copper(II) Hydroxide Complexes of N-Heterocyclic Carbenes and Catalytic Oxidative Amination of Arylboronic Acids, Organnometallics, 2010, vol. 29, 1457-1464
[5] George B. Kauffman, Rayon: The first semi-synthetic fiber product, Journal of Chemical Education, 1993, vol. 70, 887