organic ester compound
Ethyl Acetate is an organic ester compound with a molecular formula of C4H8O2 (commonly abbreviated as EtOAc or EA), appears as a colorless liquid. It is highly miscible with all common organic solvents (alcohols, ketones, glycols, esters), which make it a common solvent for cleaning, paint removal and coatings.
Ethyl acetate is found in alcoholic beverages, cereal crops, radishes, fruit juices, beer, wine, spirits etc. It has a fruity characteristic odor that is commonly recognized in glues, nail polish remover, decaffeinating tea and coffee, and cigarettes. Due to its agreeable aroma and low cost, this chemical is commonly used and manufactured in large scale in the world, as over 1 million tons annually. 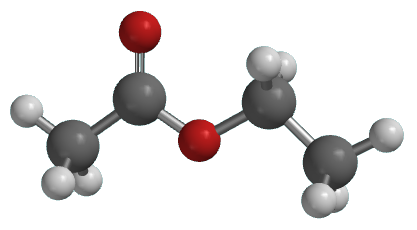 ethyl acetate structure
Chemical Properties
Ethyl acetate (structure shown above) is the most familiar ester to many chemistry students and possibly the ester with the widest range of uses. Esters are structurally derived from carboxylic acids by replacing the acidic hydrogen by an alkyl or aryl group. Ethyl acetate itself is a colourless liquid at room temperature with a pleasant "fruity" smell, b.p. 77°C. 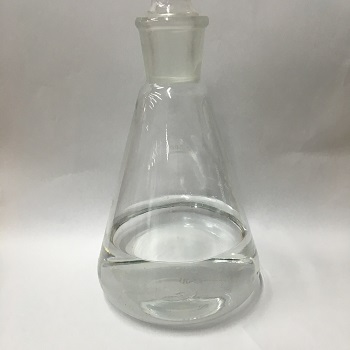 The first one is a classical Fischer esterification process of ethanol with acetic acid in presence of acid catalyst. This process needs acid catalyst2 such as sulphuric acid, hydrochloride acid, ptoluene sulfonic acid etc. This mixture converts to the ester in about 65% yield at room temperature.
CH3CH2OH + CH3COOH ↔ CH3COOC2H5 + H2O
The reaction can be accelerated by acid catalysis and the equilibrium can be shifted to the right by removal of water.

The second one is Tishchenko Reaction of acetaldehyde using aluminium triethoxide as a catalyst. In Germany and Japan, most ethyl acetate is produced via the Tishchenko process.
2 CH3CHO → CH3COOC2H5
This method has been proposed by two different routes; (i) dehydrogenative process, which uses copper or palladium based catalyst and (ii) the oxidative one, which employs, PdO supported catalysts.

The third one, which has been recently commercialized, is addition of acetic acid to ethylene using clay and heteroploy acid7 as a catalyst.
CH2= CH2 + CH3COOH → CH3COOC2H5
The processes, however, have some disadvantages; both the conventional esterification and addition of acetic acid to ethylene need stock tanks and apparatus for several feed stocks. Moreover, they use acetic acid that causes apparatus corrosion. Although Teshchenko Reaction uses only one feed and it is a non-corrosive material, it is difficult to handle acetaldehyde because is not available outside of petrochemical industrial area.
In such circumstances, an improved process of ethyl acetate production is strongly desired.
Extinguishing agent
dry powder, dry sand, carbon dioxide, foam, and 1211 fire extinguishing agent
Professional standards
TWA 1400 mg/m³; STEL 2000 mg/m³