General Description
Small colorless crystals. Denser than water. Contact may cause severe irritation to skin, eyes, and mucous membranes. Toxic by ingestion, inhalation and skin absorption. Used to make electric storage batteries, soaps, and lubricants.
Reactivity Profile
LITHIUM HYDROXIDE MONOHYDRATE neutralizes acids exothermically to form salts plus water. Reacts with certain metals (such as aluminum and zinc) to form oxides or hydroxides of the metal and generate gaseous hydrogen. May initiate polymerization reactions in polymerizable organic compounds, especially epoxides. May generate flammable and/or toxic gases with ammonium salts, nitrides, halogenated organics, various metals, peroxides, and hydroperoxides. May serve as a catalyst. Reacts when heated above about 84°C with aqueous solutions of reducing sugars other than sucrose to evolve toxic levels of carbon monoxide [Bretherick, 5th Ed., 1995].
Air & Water Reactions
Soluble in water; heat of dissolution may generate steam and cause spattering.
Health Hazard
TOXIC; inhalation, ingestion or skin contact with material may cause severe injury or death. Contact with molten substance may cause severe burns to skin and eyes. Avoid any skin contact. Effects of contact or inhalation may be delayed. Fire may produce irritating, corrosive and/or toxic gases. Runoff from fire control or dilution water may be corrosive and/or toxic and cause pollution.
Fire Hazard
Non-combustible, substance itself does not burn but may decompose upon heating to produce corrosive and/or toxic fumes. Some are oxidizers and may ignite combustibles (wood, paper, oil, clothing, etc.). Contact with metals may evolve flammable hydrogen gas. Containers may explode when heated.
Purification Methods
It crystallises from hot water (3mL/g) as the monohydrate. It is dehydrated at 150o in a stream of CO2-free air. It sublimes at 220o with partial decomposition [Cohen Inorg Synth V 3 1957, Bravo Inorg Synth VII 1 1963]. 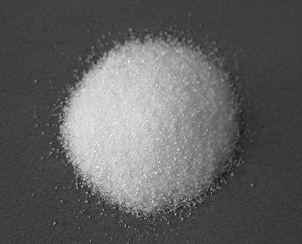 Both anhydrous and lithium hydroxide monohydrate absorb carbon dioxide from the air to form lithium carbonate.
The solubility of lithium hydroxide in water is lower than that of the other alkali metal hydroxides. However, lithium hydroxide is a strong base and reacts completely with both weak and strong acids in aqueous solutions.
Alkali
Lithium hydroxide is a strong base, its chemical properties are more similar to that of the hydroxide at group 2 in periodic table of elements, but quite different with the LDHs in the Group 1.The chemical formula is LiOH, molecular weight is 23.95, melting point of 450 ℃, decomposition temperature of 924 ℃ and relative density is 1.46.Its a white tetragonal crystal and has strong causticity and excitability to the skin.It is slightly soluble in ethanol, soluble in water, but the solubility is less than that of the other alkali metal hydroxides.
The monohydrate can be obtained when the lithium hydroxide react with the water vapor in the air or form the crystals in the aqueous solution. It can react with the acidic gas like sulfur dioxide, hydrogen chloride and hydrogen cyanide etc. It can also react with the strong or weak acids in aqueous solution. Absorbing the carbon dioxide in the air can generate lithium carbonate.
Lithium hydroxide is used as grease additives (thickeners, antioxidants, extreme pressure agents) to improve heat resistance, water resistance, stability and mechanical properties. The grease additives can be used in the bearings of car, plane and crane etc; the raw material of the lithium battery electrolyte.
The calcined solid lithium hydroxide can be used as the carbon dioxide absorbent for the crew members at the spacecraft and submarine.In early American, the areospaceplane of mercury, gemini and apollo project are all using the lithium hydroxide as the absorbers. Its has a reliable performance and can can easily absorb carbon dioxide from the gas contained water vapor. The chemical reaction is: 2LiOH + CO2 → Li2CO3 + H2O, the anhydrous lithium hydroxide of only 1g can absorb carbon dioxide with volume of 450ml. Only 750g of the anhydrous lithium hydroxide can imbibe the carbon dioxide exhaled by one person each day.
Further, lithium hydroxide is also widely used as the raw material to prepare the other subject like lithium compound, lithium salt, lithium soaps, lithium grease, alkyd resins, developer of spectral analysis, the additives of alkaline storage battery, photographic developers and the catalyst etc. It can increase the capacity of the battery by 12%~15% and improve the battery’s life for 2~3 times when it used as the additive for alkaline storage battery Alkaline storage battery as the electrolyte additive.
The information aboved is edited by ChemicalBook Wang Xiaonan.
Development history
The lithium hydroxide was used as the carbon dioxide absorbents in the submarine and the inflatable source of army ballon at 1944.
At 1950, 6Li，the isotope of Li, is used as a raw material for producting the thermonuclear weapons like hydrogen bomb. From that time the United States atomic energy industry began to use a large quantity of lithium hydroxide which lead to amazing development of the lithium industry.
Lithium and its compounds are widely used in the military industry and civilian industry due to its unique chemical and physical properties. Aluminum industry is the largest client of lithium. Adding lithium carbonate to the aluminium electrolysis can reduce the electrolyte’s melting point and increase the current efficiency of aluminum electrolyser resulting in the improment of the aluminum production by about 10% and the power consumption reduced by 8 to 14%; in addition, it can also inhibit the discharge of the harmful fluorine by 22% to 38%. In the United States and Europe, the amount of lithium carbonate consumed by the aluminum industry can take 40% of the total amount of lithium.
Uses