General Description
A clear colorless liquid with a petroleum-like odor. Flash point 87°F. Less dense than water and insoluble in water. Vapors heavier than air.
Reactivity Profile
CYCLOPENTANONE(120-92-3) polymerizes easily, especially in the presence of acids. Can react with oxidizing materials, i.e. hydrogen peroxide.
Air & Water Reactions
Highly flammable. Insoluble in water.
Health Hazard
Inhalation or contact with material may irritate or burn skin and eyes. Fire may produce irritating, corrosive and/or toxic gases. Vapors may cause dizziness or suffocation. Runoff from fire control or dilution water may cause pollution.

Physical and Chemical Properties
Cyclopentanone is also known Adipic Ketono. It is transparent colorless oily liquid. It has smell of special ether and also slightly mint-smell. It has a relative molecular mass being 84.12. It also has a relative density being 0.9487, melting point being-51.3 ℃, boiling point being 130.6 ℃, 23~24 ℃ (1.333 X 103Pa), the refractive index being 1.4366, and the flash point being 30 ℃. It is insoluble in water, soluble in alcohol, ether and acetone. It is narcotic at high concentrations. It can be obtained through oxidation of cyclopentanol. It can also be obtained through the heating of Adipic acid in the presence of Barium hydroxide. Cyclopentanone is also easily subject to polymerization especially in the presence of an acid. In the case of heating, it can participate in the following dehydration reactions, respectively producing 2-cyclopentylene cyclopentanone and 2'-cyclopentylene-2-cyclopentylene cyclopentanone: 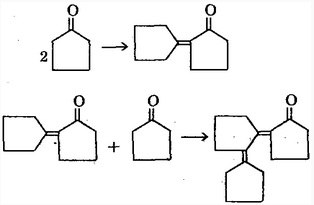 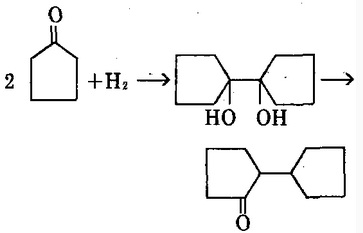 Cyclopentanone is mainly used for the manufacturing of drugs, biological agents, pesticides and rubber additives.
Aldehydes, ketones can react with diazoalkane and have the nitrogen atoms lost, generating two carbonyl compounds and epoxy compounds. When the aldehydes, ketones molecules contain electron-withdrawing groups, the reactivity is increased will boost the generation of the epoxy compound. The ketone molecule, with the increase of the hydrocarbon group, also mainly generates epoxy compound. Cyclic ketones, instead, will have ring expansion reactions. The bigger the hydrocarbyl group of the diazoalkane is, the more carbonyl compounds can be obtained.
The order of the ketone reactivity is consistent with its nucleophilic substitution order:
Cl3CCOCH3> ClCH2COCH3> CH3COCH3> CH3COC6H5> cyclohexanone> cyclopentanone> cycloheptanone> cyclooctanone.
The main purpose
1, Take the n-valeraldehyde and cyclopentanone as raw material, and first go through aldol condensation reaction and further dehydration reaction to obtain pentylene cyclopentanone, then followed by selective catalytic hydrogenation to obtain pentyl cyclopentanone. Pentyl cyclopentanone has strong floral and fruity aroma as well as nuances of jasmine. It can be used in the formulation of daily chemical flavor with the usage amount being less than 20%. IFRA has no restrictions.
2, Take n-hexanal and cyclopentanone as the raw material, first have condensation, and then perform selective hydrogenation reaction to obtain hexyl cyclopentanone. Hexyl cyclopentanone has strong jasmine smell accompanied by fruit nuances and can be used in perfume fragrance as well as the formulation of other kinds of fragrance with the usage amount being less than 5%. IFRA has no restrictions.
3, Take the 1-pentene or 1-heptene obtained by the cracking of paraffin or dehydration of the corresponding alcohol as the raw material, in the presence of t-butyl peroxide as the initiator, have addition reaction of the free radical group with cyclopentanone, generating 2-pentyl cyclopentanone (or 2-heptyl-cyclopentanone) with oxidation and ring expansion reaction to become δ-lactone (or δ-Dodecalactone).
4 Synthesis route with cyclopentanone being the starting material is of the greatest industrial production value. Cyclopentanone is first had aldol condensation reaction with n-valeraldehyde with the dehydration products further undergoing condensation and the selective hydrogenation to generate 2-pentyl cyclopentanone. It finally undergoes oxidation and ring expansion to become δ-decalactone.
5, δ-decalactone is mainly used in the formulation of edible food flavor. It is considered with the characteristic flavor of the natural cream. Before its emergence, perfumers had long been limited to application of monomer spices such as butanedione and vanillin monomers to be as the major raw material for the deployment of butter flavor. But it is generally recognized that the formulated butter flavor is worse than natural products in the respects of both taste or flavor respects. Only after the use of δ-decalactone can it have realistic cream flavor, especially in the case of using δ-Dodecalactone and δ-decalactone in combination for being as the main flavor raw material which can further improve the flavor and effect of the formulated cream spice.
6, Take cyclopentanone and pentanal as raw materials, have condensation to produce 2-(1-hydroxy) pentyl cyclopentanone which is then reacted with dimethyl malonate and hydrolyzed at 160~180 ℃, go through decarboxylation, esterification to obtain methyl dihydrojasmonate. Methyl dihydrojasmonate is the edible flavor provided by the GB2760-1996 of China for temporary application. Its aroma is better than the natural methyl jasmonate. Its property is also relatively stable.
The above information is edited by the chemicalbook of Dai Xiongfeng.
Chemical Properties
It is colorless, oily liquid with a pleasant mint smell. It has a melting point of-58.2 ℃, boiling point of 130.6 ℃, the relative density of 0.9509 (20 ℃), the refractive index of 1.4366 and the flash point of 29.82 ℃. It is miscible with ethanol, ethyl ether and slightly soluble in water. It is easy to undergo polymerization, especially in the case of trace amount of acid.
Production method
It can be obtained through the heating of Adipic acid in the presence of barium hydroxide. Mix the barium hydroxide and adipic acid uniformly and heat to 285-295 °C, further distill out the generated cyclopentanone at this temperature. The distilled calcium chloride is salted out for separating the cyclopentanone; add appropriate amount of alkaline solution to remove the adipic acid wash, then wash with water; dry with anhydrous calcium chloride; have distillation; collect the fraction in the 128-131 ℃ to obtain the finished product with the yield being 75-80%.
Category
Flammable liquid
Toxicity grading
poisoning
Acute toxicity
Intraperitoneal-mouse LD50: 1950 mg/kg; subcutaneous-Mouse LD50: 2600 mg/kg.
Data irritation
Skin-rabbit 500 mg Mild; Eyes-rabbit 100 mg severe.
Flammability and hazard characteristics
It is flammable in case of fire, high temperature and with burning producing irritated smoke.
Storage characteristics
Treasury: ventilation, low-temperature and dry; store it separately from oxidants and acids.
Extinguishing agent
Dry powder, dry sand, carbon dioxide, foam, 1211 fire extinguishing agent.