Chemical Properties
Nitrogen dioxide may be present in the form of a yellowish-brown liquid or a reddish-brown gas above 21.1 °C (70 °F) with a pungent acrid odor. It reacts with water to form nitric and nitrous acid and has a vapor pressure of 720 mmHg. It is also a noncombustible liquid or gas that accelerates the burning of combustible materials. Nitrogen dioxide is more toxic than nitrogen oxide. 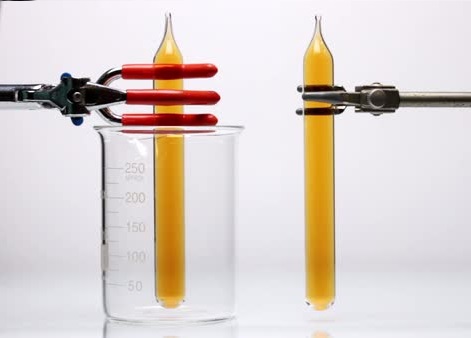 Preparation
Nitrogen dioxide may be prepared by several methods. It is produced when an electric discharge is passed through air. It is made commercially from nitric oxide and air. Nitric oxide made by various processes (See Nitric Oxide) rapidly oxidizes to nitrogen dioxide. It is formed by decomposing nitric acid or by oxidizing ammonia with air:
HNO3 → NO2 + H2O
4NH3 + 7O2 → 4NO2 + 6H2O
Also, nitrogen dioxide can be made by heating copper with nitric acid.
In the laboratory, nitrogen dioxide is formed by heating lead nitrate or nitrate of another heavy metal:
2Pb(NO3)2 → 2PbO + 4NO2 + O2
Gaseous mixture of nitrogen dioxide and oxygen is passed through a U-tube placed in a freezing mixture. Nitrogen dioxide condenses and is collected as liquid.
Reaction
The oxidation state of nitrogen in nitrogen dioxide is +4. The molecule has an unpaired electron. Both these factors contribute to its reactivity. Nitrogen dioxide readily converts to other forms of nitrogen oxides. It coexists in equilibrium with its dimeric form, N2O4. The latter is more stable at ordinary temperatures.
When heated above 150°C, nitrogen dioxide dissociates to nitric oxide and oxygen:
2NO2 → 2NO + O2
Nitrogen dioxide dissolves in cold water, forming a mixture of nitrous acid and nitric acid:
2NO2 + H2O → HNO2 + HNO3
Nitrous acid readily decomposes to nitric acid and nitric oxide:
3HNO2 → HNO3 + NO + H2O
The overall reaction is as follows:
3NO2 + H2O → 2HNO3 + NO
When dissolved in warm water, no nitrous acid forms.
Nitrogen dioxide is a strong oxidizing agent. It oxidizes both nonmetals and metals, forming their oxides and itself reduced to nitrogen. Thus, sulfur, phosphorus and charcoal burn in nitrogen dioxide to yield oxides of these elements and nitrogen:
2NO2 + 2S → 2SO2 + N2
2NO2 + 2C → 2CO2 + N2
Copper, zinc, iron and many other metals are similarly converted to their oxides when heated with nitrogen dioxide:
2NO2 + 2Cu → 2CuO + N2
2NO2 + 4Zn → 4ZnO + N2
Nitrogen dioxide oxidizes an aqueous solution of iodide to iodine, hydrogen sulfide to sulfur, and carbon monoxide to carbon dioxide. In such reaction, it is reduced to nitric oxide, rather than nitrogen:
NO2 + 2I¯ + H2O → I2 + NO + 2OH¯
NO2 + H2S → NO + H2O + S
NO2 + CO → NO + CO2
With stronger oxidizing agents, nitrogen dioxide acts as a reducing agent.
Thus, it reduces per manganate, MnO4¯, to Mn2+ ion, decolorizing its solution. In this reaction, it is oxidized to nitrate ion:
MnO4¯ + 5NO2 + H2O → Mn2+ +2H+ + 5NO3¯
Reaction with fluorine forms nitryl fluoride, NO2F:
2NO2 + F2 → 2NO2F
Nitrogen dioxide reacts with alkalies, giving a mixture of nitrite and nitrate:
2NO2 + 2OH¯ → NO2¯ + NO3¯ + H2O