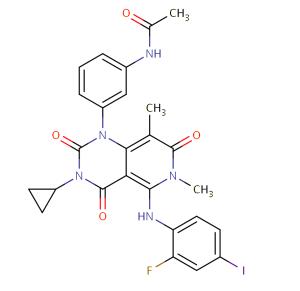 Trametinib, a reversible inhibitor of mitogen-activated extracellular signal-regulated kinase 1 (MEK1) and MEK2, can influence the MAPK pathway and inhibit the cellular proliferation by activation of MEK1 and MEK2 kinases, which are upstream regulators of the extracellular signal-related kinase (ERK) pathway. Trametinib inhibis BRAF V600 mutation-positive melanoma cell growth both in vitro and in vivo, and its treatment on the BRAF V600E or V600K mutation-positive melanoma have been approved by FDA on May 2013. However, the drug is not recommended for patients who have been treated with BRAF inhibitors. In early stage clinical trials, trametinib showed good efficacies, especially for the treatment of BRAF V600 mutation-positive melanoma. Recently in a phase Ⅲ clinical trial, trametinib demonstrated significant increase in progression-free survival and overall survival in the patients compared to other chemotherapy drugs. Here are three clinical studies of trametinib to illustrate its advantages in biomedical properties:

First, An international multi-center, randomized, open-positive, controlled phase III clinical trial involving 322 patients with BRAF V600E or V600K mutation-positive metastatic melanoma. These patients have not previously received chemotherapy for advanced metastatic disease, or have not previously been treated with BRAF inhibitors or MEK inhibitors. Prior to the start of follow-up replacement therapy, the median duration of patients in the treatment group was 4.9 months, compared with 3.1 months in the control chemotherapy group. 51 (47%) patients were transferred from the control chemotherapy group to the treatment group due to disease progression. The main efficacy indicator was progression-free survival (PFS). Patients were randomized to receive this product (2 mg, qd, n = 211) or controlled chemotherapy (including intravenous administration of dacarbazine 1000 mg·m-2 every three weeks or Paclitaxel 175 mg·m-2, n = 108). The treatment was continued until the condition worsened or became intolerable. The results showed that the PFS in the treatment group was statistically significantly improved. The PFS in the treatment group and the control group were 4.8 and 1.5 months, respectively (P <0.0001), and the HR was 0.47; the objective response rate (ORR) were 22% and 8%, of which the complete response rate (CR) was 2% and 0, and the partial response rate (PR) was 20% and 8%; the median remission period in the treatment group was 5.5 months. The control group was not observed.

Another open, randomized, controlled phase II clinical trial involving 162 patients with BRAF V600E or V600K mutation-positive metastatic melanoma. These patients have also not previously been treated with chemotherapy for advanced metastatic disease or with BRAF inhibitors or MEK inhibitors. All patients were randomly divided into 3 groups (1: 1: 1), all of them taking oral dalafenib (150mg, bid), and two of them were given oral trimetinib (1 or 2mg, qd) simultaneously. The main evaluation indicators were the incidence of skin squamous cell carcinoma, progression-free survival, and remission, and the secondary indicators were total survival and so on. Treatment until the condition worsens or intolerable toxicity, and the average course of treatment is 14 months. As a result, the total response rate of the 2mg treatment group and the control group was 76% and 54% (P = 0.03), CR was 9% and 4%, PR was 67% and 50%, respectively; the median remission period was 10.5 and 5.6 months respectively. The incidence of skin squamous cell carcinoma was 7% and 19% (P = 0.09), PFS was 9.4 and 5.8 months, and HR was 0.39 (P <0.001). In addition, BRAF variant subtypes (V600E accounted for 85% and V600K accounted for 15%) showed similar complete remission rates.

The third open phase II clinical trial included two groups of patients. Patients with BRAF mutant melanoma who had previously been treated with BRAF inhibitors were in group A (n = 40) and who had received chemotherapy (or) immunotherapy were in group B. (n = 57). All patients took 2mg orally of this product, qd. Results: There was no clear objective response in group A. Eleven patients (28%) had stable disease (SD). The median progression-free survival was 1.8 months. One patient (2%) in group B had complete remission, 13 (23%) had partial remission, and 29 (51%) had stable disease (specific RR was 25%), with a median PFS of 4.0 months. Partial remission was prolonged in one patient with both BRAFK601E and V6OOR mutations.