Malonic acid (IUPAC systematic name: propanedioic acid) is a dicarboxylic acid with structure CH2(COOH)2. The ionized form of malonic acid, as well as its esters and salts, are known as malonates. 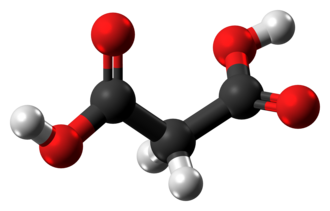 Malonic acid was found in nature for the first time in 1881 by von Lippmannwho isolated it from deposits of calcium salts on the walls of evaporating equipment used in the beet sugar industry. A few other references to its detection in plants are on record: for example, Turner and Hartman in 1925 isolated malonic acid in small amounts by distillation of the esters of organic acids obtained from the alfalfa plant, and Nelson and Hasselbring subsequently found it in extracts of the wheat plant by similar means.

With the use of modern chromatographic methods, Bentley has recently found evidence for the presence of malonic acid, occasionally in fairly substantial amounts, in some eighteen species of leguminous plants as well as in a few species from other botanical families. The acid was isolated for positive identification from the leaves of the runner bean (Phaseolus coccineus L.), and, in the stem tissue of this species, it was present to the extent of 2.1 mg. per gm. fresh weight, i.e. at approximately 0.03 M concentration or 60 m.eq. per kilo.

In a 5-l. round-bottomed flask, 500 g. (5.3 moles) of chloroacetic acid (Note 1) is dissolved in 700 cc. of water. The solution is warmed to 50°, neutralized with 290 g. (2.7 moles) of anhydrous sodium carbonate, and again cooled to room temperature. Meanwhile, 294 g. (6 moles) of sodium cyanide (97 per cent) is dissolved in 750 cc. of water warmed to 55°; the solution is cooled to room temperature and then added to the sodium chloroacetate solution, with rapid mixing of the two solutions and cooling under the water tap. When the solutions are completely mixed, cooling is stopped and the temperature allowed to rise. When it reaches 95°, the solution is cooled by adding 200 cc. of ice water, and this is repeated, if necessary, until the temperature no longer rises (Note 2). The solution is then heated on the steam bath for one hour to ensure completion of the reaction.

At the end of this time, the solution is cooled to room temperature and 240 g. (6 moles) of solid u.s.p. sodium hydroxide is slowly dissolved in it. When solution is complete, the reaction mixture is again heated on the steam bath under a hood. When the temperature reaches 60–70°, evolution of ammonia begins and becomes more vigorous with rise in temperature. Most of the ammonia is evolved in forty-five minutes, but the solution is heated for at least three hours, and the last traces of ammonia are removed by bubbling steam through the hot solution for forty-five to sixty minutes more.

A solution of 600 g. of anhydrous calcium chloride in 1.8 l. of water warmed to 40° is added slowly with rapid mixing to the hot sodium malonate solution. A cheese-like precipitate of calcium malonate is formed immediately and becomes coarsely crystalline on standing for twenty-four hours. After the supernatant solution is decanted, the calcium malonate is washed by decantation four or five times with 500-cc. portions of cold water. It is then transferred to a filter, sucked as dry as possible, and dried in the air, or at 45–50°, to constant weight. The yield is 800–900 g.

The dry calcium malonate is placed in a 3-l. round-bottomed flask with sufficient (750–1000 cc.) alcohol-free ether (Note 3) to make a paste which can be stirred. The flask is surrounded by an ice bath, and the well-stirred salt is treated with 1 cc. of 12 N hydrochloric acid for each gram of salt. After the acid has been added slowly through a dropping funnel, the solution is transferred to a continuous extractor (Note 4) and extracted with ether until no more malonic acid is obtained. The product, as obtained from the undried ether solution by concentration, filtration, and drying in the air, melts at 130° or higher and is sufficiently pure for most purposes. The yield is 415–440 g. (75–80 per cent of the theoretical amount).

Synthesis and Uses of Cinnamaldehyde
Nov 28, 2019

An Efficient Preparation for 2-Cyano-4'-methylbiphenyl
Nov 28, 2019